The toppled regime of Sudanese leader Omar al-Bashir had turned a blind eye to the smuggling of weapons through Sudan to Gaza, and Hamas is hoping that any successor government will adopt a similar attitude. 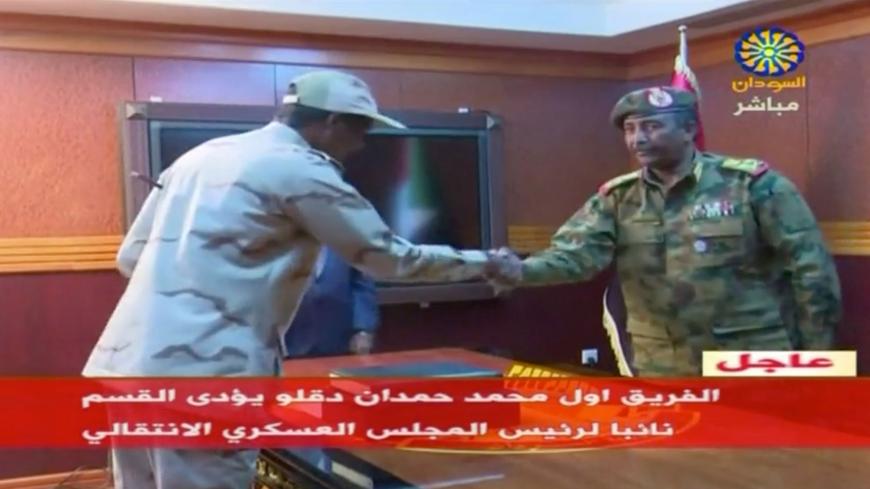 GAZA CITY, Gaza Strip — Hamas has remained silent about the Sudanese government transition after Defense Minister Ahmed Awad ibn Auf stood down on April 12, the day after leading a coup that toppled President Omar al-Bashir, with whom the movement had had strong ties. Sudan's significance to Hamas lies in it being one of the most important routes for the transfer of arms to Gaza. Bashir's regime boasted of its political support for Hamas and allowed it to open an office there. Hamas members also studied in Sudan.

Israel has over the years repeatedly reproached Sudan for opening its territory and ports to arms smuggled overland from Libya and by sea and air from Iran en route to Hamas via the Sinai. A retired Sudanese military commander who spoke to Al-Monitor on the condition of anonymity said, “The former Sudanese regime did not provide any weapons to Hamas, but it turned a blind eye to the smuggling of its weapons through its territory to the Gaza Strip.”

The change in regime in Egypt dealt a significant blow to operations when President Abdel Fattah al-Sisi ordered the destruction of the tunnels between Egypt and Gaza through which the Palestinian factions received weapons and ordinary Palestinians were able to obtained an array of goods. With the crackdown, some smugglers turned to the sea to move goods. On April 7, Israel arrested two Palestinian fishermen for allegedly smuggling large amounts of explosives from Egypt to Hamas via the Mediterranean.

Mahmoud Mardawi, a former military official of the Izz ad-Din al-Qassam Brigades, Hamas' military wing, spoke to Al-Monitor about how political changes in the Arab world over the past decade had led to a decline in financial and military support for the Palestinian factions, especially Hamas. Given this lack of support and Israeli control over goods entering Gaza, the movement had to resort to manufacturing its own weapons using smuggled equipment. Mardawi would not go into the specifics of smuggling, stating, “Methods of smuggling are secret, and no one in the movement is to speak of them in the media.”

The retired commander explained that the majority of members of the Sudanese military council, who hold positions in the army and the security services, had been aware of the details involving arms smuggling to Hamas. He ruled out the possibility of the new ruling transitional council, led by Lt. Gen. Abdel Fattah al-Burhan Abdelrahman, taking any action contrary to the former regime’s support of the Palestinians, in particular the Palestinian resistance movements. He claimed that support for the Palestinian cause was a top priority of Sudanese officials and citizens.

Israel has sought to stem arms smuggling through Sudan to Hamas in various ways, including assassination, as in the case of Mahmoud Mabhouh, a Hamas official in charge of procuring weapons, while in Dubai in January 2010. In March 2009, it had conducted an air raid in eastern Sudan, targeting a 17-truck convoy carrying weapons destined for Gaza. Another raid, in October 2012, struck an arms factory in Khartoum, and in March 2014, the Israeli navy seized a ship loaded with weapons in the Red Sea between Sudan and Eritrea that it said was en route from Iran to Gaza.

Israeli air raids have also been ordered to thwart arms smuggling in the Sinai, most recently in late February. In January, then-Israeli Chief of Staff Gadi Eizenkot reported that since he took office in 2015, the Israeli military had carried out air raids in the Sinai and elsewhere that destroyed 15,000 to 20,000 rockets headed to Hamas in Gaza.

In recent years, Israel has sought to establish secret diplomatic relations with Khartoum to steer it away from Iran and stop the flow of arms to Hamas. In addition, on May 2, 2018, the French website Intelligence Online published “Israel: Intelligence Service Cultivates Its Contacts in Libya,” an article revealing that the month before Israel had established communications with Gen. Khalifa Hifter, commander of the so-called Libyan National Army, to exchange information to stop the transfer of arms to Hamas from Libya via Sudan.

This past February a Libyan court convicted four Palestinians, who were picked up in October 2016 on charges of transferring weapons to Hamas via Sudan and Sinai. Yusuf al-Sharqawi, a retired Palestinian general, told Al-Monitor that he does not believe the change in regime in Sudan will affect the flow of arms to the Palestinian factions in Gaza, noting that many arms shipments clandestinely enter Gaza without the knowledge of Sudanese authorities.

Sharqawi noted that given Sudan's geographic location, Hamas needs to maintain good relations with whoever controls the country. The movement feels it vital to ensure that its smuggling routes remain intact.

For the meantime, Hamas is keeping an eye on the political situation in Sudan with the hope that the new leadership follows in the previous regime's footsteps in turning a blind eye.