Why is Israel forging secret ties with Sudan?

Hamas condemns the current normalization of ties between several Arab countries and Israel, at a time the Israeli media is talking about efforts to stop arms reaching the Gaza Strip through Libya and Sudan. 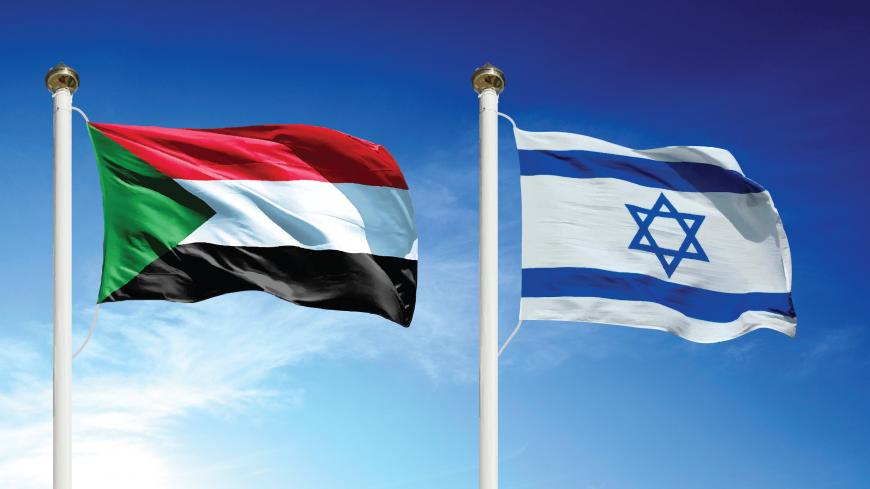 Moreover, Bahrain invited Nov. 25 Israeli Minister of Economy Eli Cohen for a visit in April to attend a technology conference. On the same day, Chadian President Idriss Debby visited Israel, in a bid to strengthen ties between the two countries, while Chad is hoping to obtain Israeli-made weapons and security assistance as well as benefit from Israeli technologies.

Amid these Arab-Israeli developments, Israel’s Channel 2 reported Nov. 25 that Netanyahu’s next Arab visit will be Sudan, without specifying a date. The visit comes within the framework of efforts to create short air routes from Israel to South America via Sudan.

Israel's Channel 10 revealed Nov. 27 that an Israeli Foreign Ministry envoy secretly met with Sudanese officials in 2017 in Istanbul, one of whom is close to current Sudanese Ambassador to Washington Mohammed Atta, who previously served as Sudan's intelligence chief. The meeting paved the way for diplomatic overtures.

“Sudan is worried about being in Israel’s bad graces, especially since it is surrounded with states that have normal relations with the Jewish state, including Egypt, South Sudan, Ethiopia as well as Eritrea,” Osama al-Ashqar, political adviser at the Rasid Group for Researches & Sciences in Sudan, told Al-Monitor.

“Despite the increasing Israeli statements about relations with Sudan, there were negative reactions at the political parties level only. The Foreign Ministry and the presidency have yet to comment. I do not have any information about official Sudanese-Israeli contacts, although I would not be surprised if this has actually taken place in some countries through Arab and foreign politicians,” he said.

The Palestinian Authority has remained silent on the Arab-Israeli rapprochement, while Hamas issued a statement Nov. 27 condemning the visits and meetings, and calling for the continued boycott and isolation of Israel.

“In a private meeting in early December with Sudanese President Omar al-Bashir along with other journalists, the president said that he would not accept normalized relations with Israel. Bashir also said that if he wanted to forge ties with Israel, he would have done it years ago. Israel is our direct enemy that fought us in South Sudan, through its weapons, soldiers and training camps,” a prominent Sudanese journalist, who did not want to be named, told Al-Monitor.

The head of the Sudanese-Israeli Friendship Association, Taraji Mustafa, revealed Nov. 30 that Tel Aviv wants to distance Khartoum from Iran and prevent the flow of weapons from its ports to the Sinai Peninsula and then to Hamas.

Israel might prioritize diplomatic ties with Sudan for security considerations, mainly to stop the arms supply to Hamas in the Gaza Strip.

Israeli daily Maariv reported Dec. 1 that Israel has been conducting regional contacts, mostly in secret, with Arab countries such as Sudan, to market security tracking technology to stop weapons from reaching Hamas in the Gaza Strip. Arms are first transported from Libya to Sudan, all the way to Sinai and Gaza.

Maj. Gen. Wasef Erekat, a Palestinian military expert in the West Bank and former artillery unit commander of the PLO, told Al-Monitor, “If Israel established relations with Sudan, I do not believe the latter will stop supplying Hamas with arms all at once, but will still have a narrower margin to do so. I don’t think weapons will stop completely from reaching Gaza.”

He added, “Iran — the main weapons supplier of Hamas — will find ways to work around any Sudanese obstacles as it has extensive experience and its territorial expansion by land and sea will allow it to finally deliver weapons to Gaza."

For many years, Sudan has been one of the main routes of weapons supply to Hamas in the Gaza Strip. Israel has placed it at the forefront of its security and military priorities in a bid to keep Hamas from having access to any combat equipment.

In March 2014, the Israeli navy intercepted in the international waters between Sudan and Eritrea a vessel carrying a sophisticated Iranian arms shipment to Gaza with dozens of surface-to-surface missiles of a range of up to 100 kilometers (62 miles).

In December 2012, Israel accused Sudan of allowing Iran to use its ports to transfer military supplies to Hamas in Gaza.

In 2010, the Egyptian army intensified its deployment on Sudan's borders to prevent arms smuggling into Gaza. In January 2009, Israeli aircraft bombed a 17-truck weapons convoy in Sudan bound for Gaza from Iran.

“We reject Arab normalization with Israel,” said Mahmoud Mardawi, a Hamas leader in Gaza and former military commander of its military wing, Izz ad-Din al-Qassam Brigades. “We call upon Arab states to close their doors in Israel’s face.”

He told Al-Monitor, “Mossad chief Yossi Cohen is spearheading the normalization campaign. This says a lot about its security and strategic dimensions. One of this campaign’s priorities is draining Gaza of arms. But we will overcome all obstacles preventing us from obtaining our combat equipment. We will exert every effort to circumvent and bypass Israeli actions with the countries of the region.”

Hamas may have realized since 2016 that Sudan is no longer tolerating the use of its territory to smuggle weapons into the Gaza Strip. Israel called in September 2016 on the United States and European countries to improve their relations with Sudan after severing ties with Tehran and preventing arms smuggling through its territory to Hamas in Gaza.

Hamas member Samira al-Halayqa spoke in 2016 of American-Israeli pressure on Sudan to end the presence of Hamas on its territory. In 2017, Hamas lashed out at Sudanese Investment Minister Mubarak al-Mahdi for calling to normalize ties with Israel. Mahdi had accused in a statement in 2017 the Palestinians of selling their land to Israel, saying also that Hamas was founded by Israel itself.

Hamas could see itself cooperating with Iran to find new land and sea routes to compensate for Sudan's potential loss.

The Sudanese presidency and Foreign Ministry have yet to comment on the Israeli news about Netanyahu’s visit to Sudan.

Correction: Dec. 12, 2018 An earlier version of this article missated the country Israeli Prime Minister Benjamin Netanyahu visited on Oct. 26. It was Oman, not Qatar.