Palestinians fear nothing will stop Israel’s annexation of West Bank

Following the Israeli prime minister's vow to annex West Bank settlements, Palestinians say moves to claim their land have long been a grim reality, even before the electoral promises. 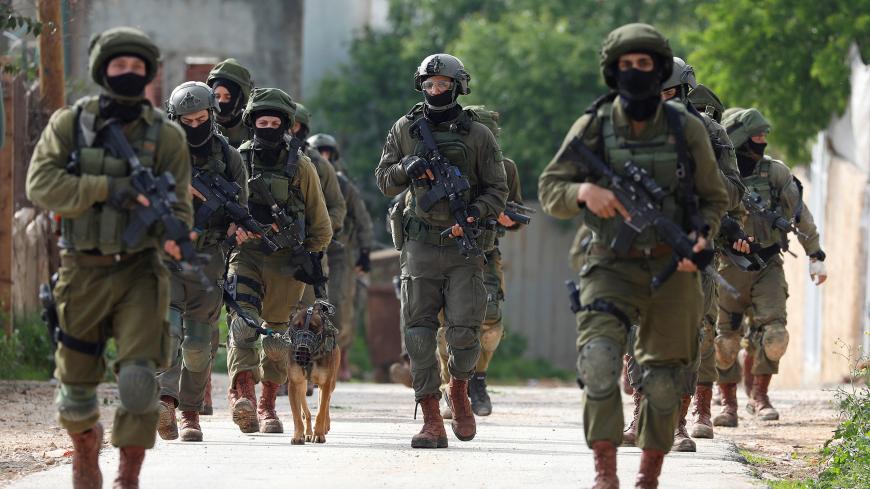 Israeli forces patrol as they search for a Palestinian gunman near Nablus, in the Israeli-occupied West Bank, March 17, 2019. - REUTERS/Mohamad Torokman

RAMALLAH, West Bank — Three days before the Israeli elections were held on April 9, Israeli Prime Minister Benjamin Netanyahu told Channel 12 that he would start extending Israeli sovereignty over the West Bank and annex West Bank settlements if he was reelected. The settlements are illegal under international law, although Israel disputes this.

For many Palestinians, however, this has been a fait accompli for many years now. Mohammed al-Khabir, 43, from Khirbet Ain al-Hilweh in the northern Jordan Valley, is no longer interested in what is being said in the news.

His biggest concern is that he and his people would be forcibly evicted from their homes if Israel extends its control of all surrounding land.

“We fear that Israel would take advantage of our summer travel and prevent us from returning to our land,” Kabir told Al-Monitor.

During the summer, the Kabir family moves with their livestock to the lush pastures in nearby Tubas in search of water and grass for the cattle to graze. They return to the Jordan Valley by the end of September every year.

The Jordan Valley, which is home to Kabir and his family of 14 Palestinians, comprises 30% of the West Bank and half of the land classified as Area C, which makes up 61% of the West Bank. These areas are under Israel’s control, according to the Taba Agreement, which is seen as an extension of the implementation of the Oslo Accord in the West Bank. These areas were supposed to be transferred under Palestinian sovereignty within five years from the signing of the agreement, which has yet to be implemented.

Now that Netanyahu has won the elections and is seeking to form a coalition of right-wing parties, his promises to annex the West Bank seem closer to becoming a reality, especially with the support of US President Donald Trump, who recognized Israel’s sovereignty over the Syrian Golan Heights on March 25 and Jerusalem as the capital of Israel in December 2017.

Back to the Jordan Valley, the facts on the ground indicate that in recent years Israel has been working on creating the proper conditions and preparing for this annexation through ongoing settlement building, uninterrupted land confiscations and harassment of the population, according to Mahdi Daraghmeh, head of the Northern Jordan Valley Council.

“The concerns voiced by Palestinian politicians in the media have become a grim reality for us, the people who are living in the Jordan Valley. I believe this has been the status quo for almost 10 years. Most of the mountain slopes facing the Jordanian border are now under full Israeli control,” Daraghmeh told Al-Monitor.

The region Daraghmeh mentioned is called the Swaida area and was completely closed in 2018 when Israel announced the establishment of a military base there and before that the establishment of a settlement by a single settler, who built a house in the area that was confiscated for the purposes of establishing a natural reserve. The settler now owns a farm there, while several other settlers have moved in to live with him. The settlement is called Khula al-Hamd.

Daraghmeh heads 19 local councils in the Jordan Valley, which is home to 3,000 Palestinians. “Palestinians of the Jordan Valley live freely inside their homes only. The rest of the surrounding lands have been confiscated for the establishment of settlements or natural reserves. The reserves end up being turned into settlements, training camps or military bases,” he said.

He added that all of the developments in the Jordan Valley have left Palestinian politicians feeling hopeless and unable to rise up to these Israeli threats.

Head of the Colonization and War Resistance Commission (CWRC) Walid Assaf told Al-Monitor, “We believe that Israel is likely to take this step [of annexing the West Bank] in light of US support. We take these threats very seriously, and we are outlining plans to deal with them.”

These plans, according to Assaf, include strengthening the people’s steadfastness to stay on their lands. “Israel’s decisions are unilateral. Israel will not be granted any right to annex Palestinian lands. We will fight this project with all available means, and we will stand up against the forced eviction policies, which Israel has been carrying out in Area C, as a prelude to extending its sovereignty over our lands,” Assaf said.

He condemned this move as a war crime under international law, as Israel would be forcibly taking over the lands of a recognized state.

“In international law, the occupying force has no right to extend its sovereignty, and any action in this context is null and void,” Shalaldeh said.

Shalaldeh also predicted that the annexation decision will be a prelude to the implementation of the Donald Trump administration's Mideast peace plan — often referred to as "the deal of the century" — and to the annexation of more Palestinian lands to Israel and the legitimization of the settlements.

He said the Palestinian response should not remain a reaction to these decisions. “These steps ought to be confronted through Palestinian constitutional decisions by the Palestinian National Council, including reviewing the agreements signed with the Israeli side,” he said.

Shalaldeh also called on the State of Palestine to call on the High Contracting Parties to the Geneva Convention to bind Israel to respect and apply the convention and to resolve the dispute over the status of the Palestinian lands and recognize them as occupied territories.

CWRC coordinator Jamal Jumaa told Al-Monitor that these plans are not something new, as Israel has been working on gradually annexing lands since 2017 through different laws and legislation, such as the implemented civil law rather than the military law, which ought to be applied in the West Bank settlements because they fall in occupied lands under the control of the Israeli military.

Israel also passed a contentious law in February 2017 allowing the government to seize land privately owned by Palestinians in the West Bank to be granted for Jewish settlements. Palestinian landowners could apply for annual rents, request compensations or be given another parcel.

Jumaa added that the biggest danger of these Israeli measures is the mass exodus they will cause, especially in these areas, in the Jordan Valley in particular and for the Bedouin communities living at the foothills of Jerusalem, such as in the village of Khan al-Ahmar.

Jumaa does not believe in the possibility of establishing any form of a Palestinian State under these circumstances, which require serious decisions on the part of the PA based on the disengagement from Israel at the economic and security levels.

“Banking on the international law now is futile, especially since the United States provides Israel with an international cover. Palestinians and only Palestinians will be able to stop this step from becoming reality, and this will ultimately lead to a full-blown political confrontation with Israel, which would entail a massive popular uprising,” he added.