Did Netanyahu cut deal with Assad?

Prime Minister Benjamin Netanyahu insists that the release of two Syrian prisoners was merely a goodwill gesture and not a part of a deal with Syrian President Bashar al-Assad. 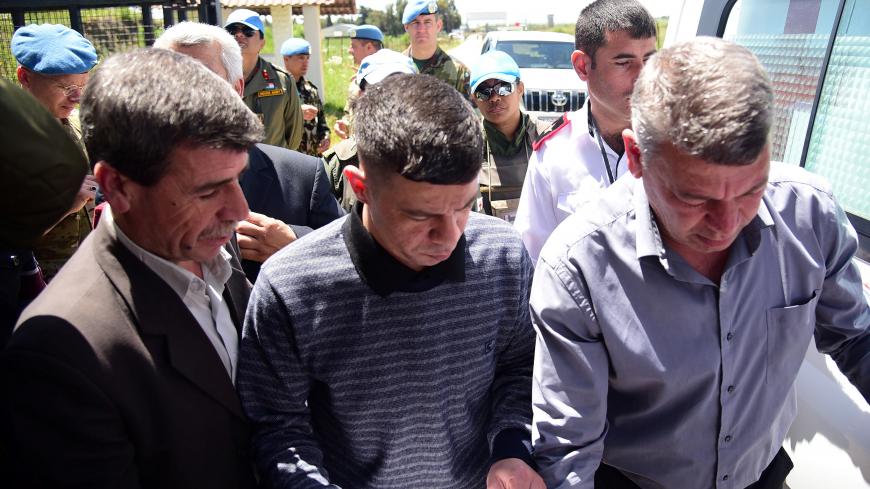 A freed prisoner is seen after he was released by Israel in what Damascus described as Russian-mediated reciprocation for the repatriation of the body of a long-missing Israeli soldier, at the Quneitra crossing, Syria, Apr. 28, 2019. - SANA/Handout via REUTERS

Israel released two Syrian prisoners this week, criminal prisoner Zidan Taweel and security prisoner Ahmed Khamis, in what Jerusalem described as a “goodwill gesture” toward President Bashar al-Assad’s regime in Damascus. It was the sole decision of Prime Minister Benjamin Netanyahu, made without authorization from the cabinet and carried out in utmost secrecy. In the harsh public and political criticism that followed, it was argued that the move was the second part of a secret deal that Netanyahu made with Assad under the mediation of Russian President Vladimir Putin. The first step, it was said, was the transfer of the remains of Israeli soldier Zachary Baumel to Israel just prior to the April 9 elections, winning Netanyahu brownie points from the public as a world-class statesman.

After Baumel's remains arrived in Israel, Netanyahu flew to Moscow to participate in an impressive ceremony that Putin organized for him. In the ceremony, the belongings of the Israeli soldier, considered missing for the last 37 years, were handed over to Netanyahu. Netanyahu again appeared as an important personage, a statesman able to solicit the assistance of the leaders of the world’s strongest powers.

But now, argue Netanyahu’s critics, it turns out that Israel made certain commitments in exchange for Baumel's remains. They argue that these commitments were hidden from the public eye so as not to damage Netanyahu prior to the elections, as the right-wing voters of the premier’s electoral base are never happy when enemy security prisoners are released. Netanyahu strongly denies the existence of any kind of a deal. Even the Israel Defense Forces, which was involved in the Israeli-Russian operation that led to the return of Baumel’s remains, denies the existence of a secret agreement.

One way or another, that Netanyahu agreed to release Syrian prisoners as a “goodwill gesture” without involving any other government body is suspicious. It clearly demonstrates, yet again, that the government institutions and formal administrative bodies that have led Israel for generations are crumbling. Even though the law expressly demands it in the event of a prisoner release, Netanyahu did not update the ministers, did not convene the cabinet and did not consult with any constitutional forums. He simply requested covert approval to bypass the security cabinet from Attorney General Avichai Mandelblit and after receiving it, Netanyahu made the arrangements on his own. The prime minister succeeded in fooling everyone: He was able to show off his prize before the elections, while the price he paid became public only after them.

Between the lines is another astonishing fact with regard to Israel’s relations with Syrian President Bashar al-Assad: Many high-level Israeli figures have long since branded Assad as finished, someone who had lost international and ethical legitimacy and committed genocide on his own people. Now, however, it seems that Israel has simply decided to reconcile itself to Assad’s full return to power. It even maintains covert relations with Assad via Russian mediation, including goodwill measures and confidence-building steps. Despite Israel's frequent attacks on Iranian targets in Syrian territory, according to foreign reports, there are no direct conflicts with the Syrian ruler himself. On the contrary — many high-level Israeli figures have maintained over the last two years that Assad knows that he has a lot to lose from the Iranian presence on his territory and agreed to it only under pressure. He is loath to pay Israel the price for that presence. Could it be that the Israeli-Syrian deal was designed to mobilize Assad to leave the Iranian camp for the Israeli side, with Russian encouragement?

Baumel, an Israeli tank commander, was declared missing in action immediately after the bloody Sultan Yakoub battle that took place 37 years ago between the IDF and the Syrian army. At the same time, two other Israeli fighters from the same unit were also declared missing: Yehuda Katz and Zvi Feldman. As is customary in Israel, efforts to find the three missing soldiers have continued for decades. There is great public involvement in these efforts, with the families deeply involved and Israeli society remaining concerned about each and every missing soldier. It became known to Al-Monitor that extensive Israeli efforts were made to search cemeteries in Syria. But none of the findings were a genetic match for the three soldiers.

Russian involvement in Syria opened up a world of possibilities to Israel. “It began with the first visit of former Chief of Staff [Gadi] Eizenkot to Moscow in 2015,” a former senior Israeli security source told Al-Monitor on condition of anonymity. “We found out that the Israeli tank that was taken in the Sultan Yakoub battle was found in Russian hands. We asked for it and, to our surprise, the Russians willingly agreed and demanded nothing in return.” The tank was brought back to Israel and the IDF understood that Moscow was open to more deals or efforts. It was decided to try and recruit the Russians for the tremendous effort of locating those missing from the battle.

The Russians operated in Syrian territory and examined graves in coordination with Israeli intelligence. “Body parts and various findings were brought to Israel three times,” an insider told Al-Monitor on condition of anonymity. “The first time there was no match to the missing soldiers, and the second time, too. But the third time, bingo.” As fate would have it, the third time fell about two weeks before elections in Israel.

Netanyahu always has this kind of luck; good news always reaches him at the right time. Once Baumel’s remains had been found in a grave in a remote Syrian cemetery, it was clear that it could not remain secret. “At this point, no one was talking about a deal,” swore a high-placed Israeli military figure, speaking to Al-Monitor on condition of anonymity. “We in the IDF, in the discourse of our intelligence wing with the Russian military intelligence — we didn’t talk about quid pro quo, they didn’t ask us tit for tat. The Russians simply helped us when we needed them.”

This theory is supported by additional sources in Israel’s security and intelligence bodies who believe that the Russians offered Israel help without asking for something specific in return. Perhaps they wanted to warm up the relationship between Israel and Syria and to cause Israel to be beholden to Russia. The question of price only arose after the return of the soldier’s remains. According to an Israeli security source (speaking on condition of anonymity), in the conversation between Netanyahu and Putin, the Russian asked the Israeli to help him “calm Assad down.” Until then, Assad didn’t even know that Russian intelligence was digging up graves in his backyard. Now he knows, and he’s not exactly thrilled with the idea. So Netanyahu rose to the occasion and made a grand gesture: releasing two Syrian prisoners. Another Israeli security source told Al-Monitor, also on condition of anonymity, “The Russians are trying to calm the Syrians this way and continue the process that just might uncover the corpses of the other two Israeli MIAs.’’

However, these perfect theories and alibis were somewhat spoiled by the words of Russian envoy to Syria Alexander Lavrentiev. In an interview with Russia’s RT broadcaster, Lavrentiev said, “But this action was not unilateral — Israel made a decision, which it will have to carry out later, to release some of the Syrian citizens who are in Israeli jails. … This was an act of interest for the Syrian side.” Of course, these words run contrary to the official Israeli version and create a problem for Netanyahu.

As it turns out, the head of the most radical right-wing government that Israel has ever known [Netanyahu], is conducting indirect but extensive negotiations with Hamas (under Egyptian mediation) for months. And now we’re told that he is also strengthening his relationship with President Assad (under Russian mediation). And all this, of course, while publicly distancing himself from both processes. Only Netanyahu is capable of pulling this off.