Consideration linked to coalition talks and to the importance of the Arab constituency might persuade Prime Minister Benjamin Netanyahu to re-create the Ministry for Minorities Affairs. 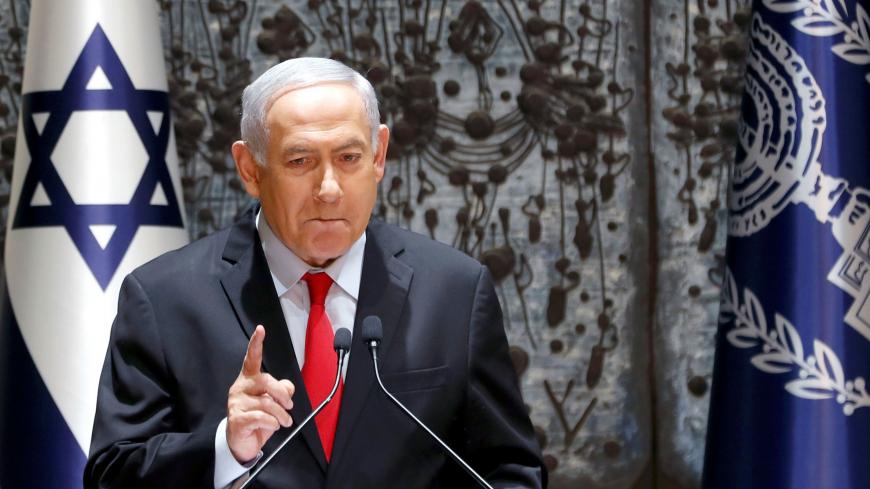 Israeli Prime Minister Benjamin Netanyahu attends a news conference after he was entrusted with forming the next government, at the president's residence in Jerusalem, April 17, 2019. - REUTERS/Ronen Zvulun

Negotiations for the formation of the next coalition officially open on April 28, but informal negotiations are already underway and the demand for portfolios in the emerging government far outweighs supply. In order to form his next government, Prime Minister Benjamin Netanyahu will have to give in to the demands of five prospective coalition partners. The five include head of the Yisrael Beitenu party Avigdor Liberman, chair of the Kulanu Party Moshe Kahlon, the ultra-Orthodox Shas and Yahadut HaTorah parties, and the United Right alliance to which he has already promised two significant ministerial positions. Most senior members of Netanyahu’s own Likud party will be last in line.

In order to satisfy all these demands, Netanyahu will have to amend the Basic Law: The Government, which limits the number of ministers to 18 as per a 2014 demand by then coalition partner Yair Lapid, head of the centrist Yesh Atid party. Current assessments put the number of ministers in the next government at 26, maybe more. In order to satisfy the appetite for portfolios, the coalition representatives must get ministries with bombastic names (but little substance), such as the Ministry of Regional Development. This will also require splitting some ministries joined together in the past — such as Minister Miri Regev’s Ministry of Culture and Sports — to provide two ministerial slots, or reconstituting defunct ministries such as the Ministry of Minority Affairs.

With the establishment of the State of Israel in 1948, Israel’s temporary government included a Ministry of Minority Affairs headed by Police Minister Bechor Shalom Sheetrit. Rather than concern for the welfare of the new state’s Arab citizens, the ministry was established to oversee Israel’s minority communities that were subjected to military rule. Israel’s first government in 1949 scrapped the ministry.

Over 45 years later, Moshe Katzav of the Likud party was appointed minister for Israeli Arab affairs (and also served as tourism minister), a position he held for three years. From 2001 to 2002, Salah Tarif of the Labor party served as a minister without portfolio in the Prime Minister’s office tasked with minority affairs. Between 2009 and 2011, Labor’s professor Avishay Braverman served as minister of minority affairs.

When Labor quit the government in 2011, attorney Ali Haider of Sikkuy — a nongovernmental organization devoted to Arab-Jewish co-existence — called for the ministry to be abolished. Haider argued at the time that the very existence of a minister in charge of minorities “was appropriate for monarchies and certainly not for democratic regimes.” Haider explained that Arab citizens were seeking to integrate into Israeli society and did not require a specific ministry to deal with their affairs. At that time, he could not have foreseen the incitement against Israel’s Arabs and their exclusion from mainstream society (prevailing these days), inter alia, by a series of anti-democratic laws pushed through by the right-wing parties of the outgoing Knesset.

The office of minority affairs in its various versions was never considered an attractive portfolio and had few takers. In its few years of existence throughout the state’s 71 years, the ministry was almost devoid of resources and real authority. Nonetheless, a group of Likud members from the Druze minority is now demanding that Netanyahu reconstitute the long-forgotten agency and appoint a minister of minority affairs for the country’s Arab, Druze, Bedouin, Christian and Circassian minorities. This group — which opposes the Nationality Law anchoring the Jewish nature of the State of Israel passed last year that relegates all non-Jewish Israelis to the level of second-class citizens — hopes a full-time minister will implement the pledge Netanyahu made last year to “provide a response to the real problems of the Druze.” Netanyahu made that promise in order to appease leaders of the Druze community after the law was adopted. They also expect a massive budgetary allocation for such a ministry based on a five-year plan for the Arab sector, formulated by Social Equality Minister Gila Gamliel and Finance Minister Moshe Kahlon. Under the plan, approved in December 2015, the government will invest 15 billion shekels ($4 billion) in improving the infrastructure, education, culture and housing in Arab communities.

A reconstituted Ministry of Minority Affairs could be considered a plum given the political right’s understanding that despite its unpopularity among Arab voters, it cannot afford to neglect them in light of the electoral tie between the right and the center-left. A minister of minority affairs committed to the well-being of Arab citizens and equipped with sufficient resources and authority could one day cull the votes of marginalized communities that no one — certainly not the right — courted before.

By the way, in the recently concluded election campaign, many parties — with the exception perhaps of the center-left Blue and White — tried to attract Arab voters. The right-wing Yisrael Beitenu, for example, sent Arabic speaker Eli Avidar, No. 4 on its Knesset slate and a former Foreign Ministry official, to convince Arab citizens to vote for Liberman. The ultra-Orthodox Shas Party also set up a special headquarters for the Arab sector, garnering thousands of votes. As an aside, on April 21 the chair of the Central Elections Committee asked Attorney General Avichai Mandelblit to investigate suspected fraud at some polling stations, especially in Arab communities.

In 2015, the government voted to establish a Ministerial Committee on Arab Sector Affairs. Netanyahu himself headed the committee — perhaps in a bid to repair the public-image damage wrought by his Election Day warning that “Arab voters are heading to the polling stations in droves" — comprised of 10 other ministers. The committee was tasked with “handling the affairs of Israel’s citizens from the Arab sector.” This was a hopeless task, and in fact, none of the other 10 members of the committee, each with a tranche of the five-year budget allocation for the Arab sector, bothered to prioritize the affairs of 20% of the population divided among numerous government ministries.

In the wake of the 2019 elections, the time has come to appoint a full-time minister of Arab affairs. Even if the reason for the appointment is to “invent” new ministries for all those seeking ministerial jobs, the result will be favorable. A budget of 15 billion shekels (the $4 billion promised in the special Arab-sector plan) requires a government ministry led by a minister committed to his appointment and ambitious to succeed, who will make the ministry thrive and restore Arab trust in state institutions.

In a victory speech after his April 9 win, Netanyahu pledged to be the prime minister of “Jews and non-Jews, all citizens of Israel … I am taking care of the country that belongs to all of us.” The time has come to prove that he means it.