Obviously, the criteria for being appointed new minister in Prime Minister Benjamin Netanyahu’s caretaker government is not competencies but loyalty to the chief. 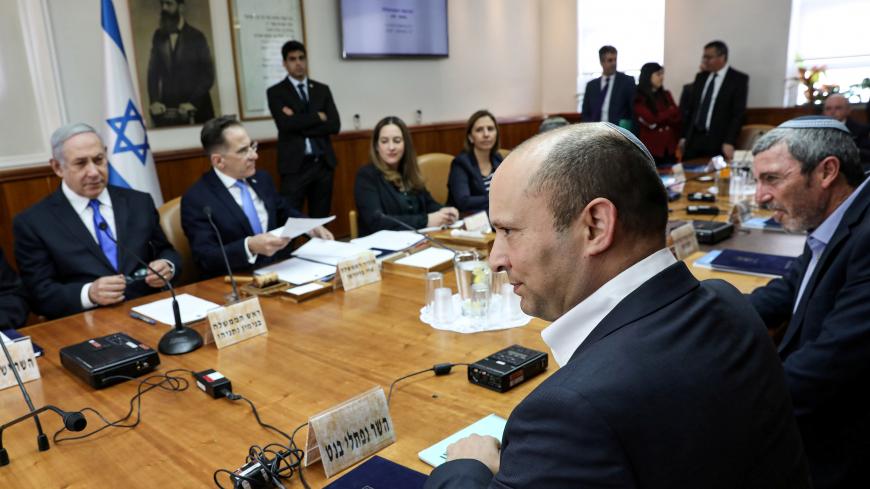 Blue and White party leader Benny Gantz is running out of time. His mandate to form Israel’s future government expires Nov. 20. If he fails in his task, the Knesset will have 21 days to form a government. If that option fails as well, Israelis will be sent to the ballot boxes for a third time within a year. That would give Prime Minister Benjamin Netanyahu some four additional months to lead the interim government he has been heading since the April 2019 elections. In other words, Israel will be run for one whole year by a government that has not won the confidence of the Knesset.

Although he leads a provisional government, Netanyahu has been hiring and firing ministers to his heart’s content to ensure sufficient allies who can provide him with immunity from possible criminal prosecution. The four-member Knesset faction consisting of the HaBayit HaYehudi-National Union parties now holds the Education and Transportation ministries. The New Right faction with its three Knesset members now holds the Defense Ministry portfolio — all in return for their unconditional support and loyalty to Netanyahu.

Transportation Minister Bezalel Smotrich, named to his position in June, aspired to become justice minister but was given a budget-rich ministry instead. To his credit, it took him only a few hours to realize that although he would be unable to lead judicial reforms, he could achieve much more in a ministry also in charge of the roads and infrastructure in the West Bank — much more than by serving as a minister in charge of defending Netanyahu by waging war against the State Prosecution.

At a Nov. 18 Knesset Finance Committee session, Smotrich declared that he had made a dramatic decision: to shut down one of Tel Aviv’s three rail lines for six weeks to enable completion of its electrification. “A minister susceptible to political pressure would have balked. I have the courage,” he added.

While everyone’s attention was focused on the consequences for commuters of the “dramatic decision” by the courageous minister, who allegedly proved his bravery in the past as an activist against Israel’s 2005 withdrawal from the Gaza Strip, Smotrich announced another decision. This one was far more dramatic, at least for the settlers whom he addressed as “friends” in a video clip he released Nov. 18, announcing with great fanfare a five-year plan for the West Bank that would include new roads, new armor for buses traveling to the settlements, upgrading of safety at intersections, and more.

“I took office a short time ago and since then we have been pushing and lobbying for you, as we have for all the citizens of Israel,” Smotrich said, pledging that the five-year plan was oriented toward developments in the West Bank, 30, 40 and 50 years from now. Nothing less. “The Judea and Samaria area and their residents will receive what all Israeli citizens receive — in planning, infrastructure, public transportation, road safety and in general,” he emphasized.

With all the public and political attention focused solely on efforts to form a new government, no one seems available to tell Smotrich that a provisional government is not allowed to make dramatic decisions. Not regarding Israel Railways and certainly not pertaining to the West Bank, and surely not based on a 50-year forecast. Smotrich seems to think he and others in Netanyahu’s defense cordon can easily weather a little media flack over such decisions. Just as long as they can exploit to its fullest the no-man’s-land provided by the provisional government.

Israel’s lawmakers did not take into account the scenario of an interim government with almost no expiration date. Given current circumstances, Netanyahu is highly susceptible to pressure and needs every one of the 55 Knesset members from five parties that he has mobilized to support him. Giving significant ministerial appointments in an interim government to tiny factions comprising three or four lawmakers in return for their defense against possible indictments seems — from Netanyahu’s perspective — a small price to pay. They, in turn, are given free rein in their interim ministries to improve the quality of the settlers’ lives and develop infrastructure in West Bank territories.

In order to make way for Smotrich at the Ministry of Transportation, Netanyahu had to move the incumbent Israel Katz elsewhere, and chose the Ministry of Foreign Affairs. Anyone listening to Foreign Minister Katz addressing the UN General Assembly on Sept. 27 in English, must have realized that his skills or contacts with world leaders were not considerations in his appointment. Katz, who also heads the influential Likud party Secretariat and who was accused in 2016 of trying to unseat Netanyahu as party leader, has made no bones about his prime ministerial ambitions. Netanyahu gave him the foreign affairs portfolio to temper his impatience.

Israel’s Ministry of Foreign Affairs is undergoing one of the worst periods of its history. Ambassadors and other diplomats often complain that Israeli embassies and consulates around the world have been crippled since 2015, when Netanyahu decided to retain the portfolio for himself and made do with appointing a deputy minister (Tzipi Hotovely of the Likud). He named Katz as a full-time minister only when he was forced to form a coalition of committed loyalists.

The same goes for the New Right’s Naftali Bennett, whom Netanyahu fired this past June as minister of education. When he feared that Bennett was currently talking politics with his rival, Benny Gantz, Netanyahu was quick to offer him a warm embrace — and the defense minister’s job, which he had also held until now. A reminder: The New Right party led by Bennett and former Justice Minister Ayelet Shaked did not garner sufficient votes to be reelected to the Knesset in April. Ahead of the September elections, a humiliated Bennett crawled to the Yamina (Rightward) alliance of right-wing parties, where he was fourth on its list of candidates. Yamina received the equivalent of seven Knesset seats in the elections, but immediately afterward split into two small factions (one being Bennett’s New Right). Despite his party’s poor electoral showing, Netanyahu not only brought Bennett back into his government, he also gave him the most prized post: minister of defense — but not before Bennett prostrated himself in an obligatory hazing, or one he thought was required, by arguing in an embarrassing Facebook post Oct. 19 that one does not unseat a prime minister just because he received cigars and champagne bottles.

However, the record for cynical appointments goes to Netanyahu’s naming of Likud freshman Amir Ohana as justice minister on June 5. Ohana is waging an ugly and destructive battle against the legal system, with only one goal in mind: to extricate Netanyahu from criminal charges. In an unusual move, even Supreme Court Chief Justice Esther Hayut lambasted Ohana for expressing views from which “the path to anarchy … is short.” But Ohana had to deliver the goods, and he clearly does so or else he would not have been catapulted above the heads of more senior and experienced Likud figures to the high-level position. Ohana reportedly befriended Netanyahu’s son Yair, who recommended him to his father, who then gave him the job. Since then, Ohana has his hands full defending Netanyahu at every opportunity and all hours of the day and night.