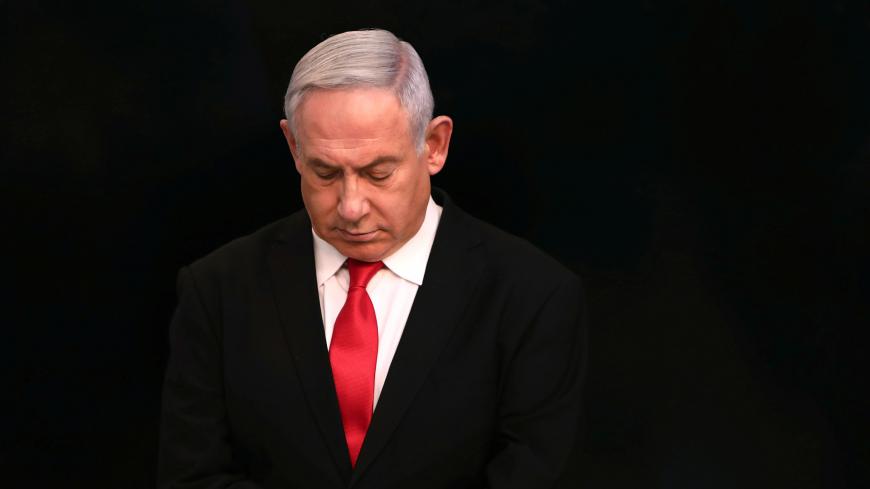 Israeli Prime Minister Benjamin Netanyahu arrives at his office to deliver a speech about measures to fight the novel coronavirus, Jerusalem, March 14, 2020. - Gali Tibbon/Pool via REUTERS

On the evening of April 6, the Likud and the Blue and White had come close to signing a draft agreement to form a unity government. Two weeks earlier, Blue and White leader Benny Gantz had fractured his own camp by acting on the good-faith belief that the coronavirus crisis required him to put the country above all else and form a government with Benjamin Netanyahu. He certainly never imagined that the war against the novel coronavirus would hardly feature in the coalition negotiations, which have instead focused on matters of concern to Netanyahu, in particular his political survival.

Being at the center of the talks, these issues put reaching an agreement at risk. On top of this, Gantz was prepared to agree that the Netanyahu family receive an official residence, paid for by the state, even after Gantz becomes prime minister, one and a half years down the road in accordance with the coalition agreement.

The big breakthrough occurred when Gantz shocked his supporters by conceding on the issue of annexing West Bank territories, agreeing that it could be brought before the Knesset for a vote. In other words, he made it easier for a Netanyahu-Gantz government to impose Israeli sovereignty on territories in the West Bank and Jordan Valley. Then, when it seemed that the road was clear for a national emergency government and a coalition agreement signed before Passover, Netanyahu reneged.

After reaching agreements on all the important matters, the Likud backed away from an understanding on judicial appointments. “After reaching understandings on all issues, the Likud party asked to reopen discussions regarding the committee to appoint judges,” an outraged Blue and White responded. “In light of this, negotiations have been halted. We will not allow any change in the functioning of the judiciary nor damage to democracy.”

Maintaining the status and independence of the Supreme Court was one of the most important issues for the Blue and White during the campaign for the March 2 elections. For the last few years, the Netanyahu government had worked incessantly to shatter Israel's legal system. Supreme Court justices were painted as intervening in legislation and depicted as serving the left, while gatekeepers like State's Attorney Shai Nitzan and Attorney General Avichai Mandelblit were accused of going after Netanyahu, no matter the cost. In June 2019, Netanyahu appointed one of his people, Amir Ohana, as justice minister. Ohana has since fought incessantly against the judicial system, as if trying to find as many escape hatches as possible for Netanyahu before he has to stand trial for bribery and fraud.

For this reason, Blue and White demanded leadership of the Justice Ministry as part of a coalition agreement. It was a red line for the alliance's leaders, who presented themselves as defending the rule of law against those plotting to eliminate it. As part of the negotiations, it was agreed that Blue and White's Avi Nissenkorn would be appointed justice minister and that the Committee for the Appointment of Judges would continue to function as it has traditionally. The Likud then demanded that the committee's operation be changed, giving it more leverage over appointments made by the committee. The demanded change blew up the negotiations. The rift between the two sides is now so deep that Ronen Tzur, Gantz’s strategic adviser, told Knesset Television, “There is a good chance that there will not be a government.”

Netanyahu had claimed that the formation of a unity government is vital in these troubled times. If that were truly the case, why would he suddenly withdraw from the agreements he had reached with Blue and White? The unequivocal answer can be found in the Twitter accounts of the leaders of the pro-settler Yamina.

Former Justice Minister Ayelet Shaked attacked Likud’s alleged surrender to Blue and White, which in her eyes would enable the High Court to pursue a proactive role of controlling the government branches, as advocated by Aharon Barak, a former president of the Supreme Court. Shaked tweeted on April 7, “If the prime minister gives up control of the Committee for the Appointment of Judges, it would mean that Barak (Aharon, not Ehud) could say that the old days are reborn and coming back. Ideological incest will return full force, through the front door. Then we could only dream of healing a diseased system.”

As justice minister from 2015 to 2019, Shaked waged a campaign against the Supreme Court to terrorize its justices, advising them to “consider carefully” before making decisions that failed to serve the interests of the West Bank settlements. Shaked boasted about how she had been able to transfer authority over Palestinian affairs, in particular land ownership disputes on the West Bank, from the Supreme Court to the Jerusalem District Court. At the same time, she took steps to ensure the appointment of conservative judges to the Jerusalem court, a process overseen by the Committee for the Appointment of Judges. “Shaked’s revolution” featured prominently in her party’s election campaign and was accompanied by a promise to overturn the judicial revolution advocated by Barak.

In a 2018 interview with Yedioth Ahronoth, Shaked boasted that she had gotten conservative judges appointed, meaning judges whose worldview matched that of the right-wing government, attributing it to her exceptional political skills. Upon learning about the agreement to appoint a justice minister from Blue and White, who would also control the Committee for the Appointment of Judges, Shaked and other Yamina members set out to ridicule Netanyahu’s concession and declare war on it.

Erez Tadmor, founder of the right-wing group Im Tirtzu, wondered whether the agreement on annexation was important enough to give up control of the Supreme Court. Of note, Netanyahu had made use of Im Tirtzu activists during his election campaign. “The legal system is destroying Israeli democracy,” Tadmor tweeted. “Withdrawal to the 1967 borders is an existential threat. Those are the ‘Auschwitz borders.’ It is a simple deal: maintaining and reinforcing the exaggerated and dangerous strength of the legal system in exchange for imposing sovereignty and erasing the existential threat of the 1967 borders. Is it the correct deal for the right to make?”

Transportation Minister Bezalel Smotrich of Yamina tweeted, “Who decided that this is the equation?! A permanent government isn’t necessary to impose sovereignty. This could also be done by a caretaker government.” The implication was that control of the Supreme Court is too high a price to pay for a unity government.

It didn’t take much more than that to terrify Netanyahu. Yamina, a small party with just six Knesset seats, had managed to disrupt his equilibrium. It now looks like Netanyahu is not only willing to break up well-advanced negotiations over a unity government, but is also willing to take the country to a fourth round of elections. All that really matters is that he not upset the settlers' party.

It wouldn’t be the first time that a commotion generated by the settlers and the right has made Netanyahu nervous enough to change his mind. In fact, what hasn’t he done to appease them? There are countless examples, among them blowing up negotiations with the Palestinians in 2014 during Barack Obama’s presidency after Naftali Bennett and right-wing organizations like My Israel and Im Tirtzu caused an uproar protesting the release of Palestinian prisoners in the “fourth pulse” of the talks.

Another example dates to April 2018. Netanyahu had just reached an agreement with the United Nations to expel half the asylum seekers in Israel in exchange for granting legal status to another 16,000 of them. Bennett, at the time education minister and leader of HaBayit HaYehudi, argued that future Israeli generations would regret the agreement. Demonstrations were held in southern Tel Aviv denouncing Netanyahu, who eventually folded and canceled the agreement. No subsequent solution to the problem of asylum seekers has been found.

Facing pressure from Yamina, Netanyahu folded in the coalition negotiations. He is willing to drag Israel into another election to avoid upsetting right-wing voters. His coronavirus government could fall even before it's formed. If it does, it won't be because of Israel’s war against the pandemic, but the right's war on the Supreme Court.