Iraq struggles to distance itself from US-Iran tensions

As the conflict between the United States and Iran intensifies, Iraq insists on remaining impartial in the conflict. 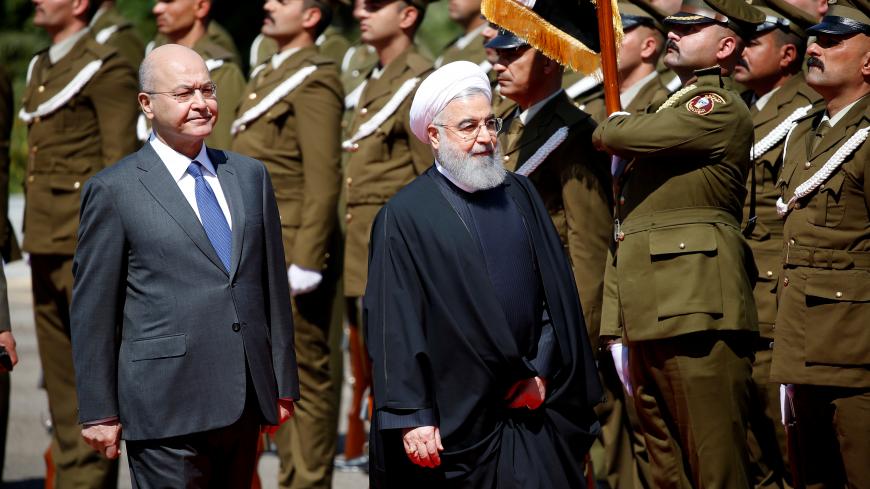 Iraq is trying hard to dissociate itself from the rising hostilities between Iran and the United States, as it hopes to preserve its national interests without aligning with either axis in the conflict.

Following his recent visit to Iran, Iraqi Prime Minster Adel Abdul Mahdi announced April 9 that he will soon visit Saudi Arabia to sign economic and security agreements, as Iraq has done with Jordan and Iran. A high-ranking Saudi delegation visited Iraq last week and signed several agreements, including ones involving electricity imports to Iraq and the construction of a large stadium.

Iraq depends on Iran for a large portion of its electricity supply. The United States has warned Iraq several times to cut its electricity imports from Iran. Previously, Washington granted a short-term waiver to Iraq exempting it from US sanctions and allowing it to import electricity and gas from Iran. The waiver was extended a few times, but as US rhetoric against Tehran intensifies, Washington's tolerance with Baghdad's imports won't last forever.

Iraq has realized that US tolerance regarding electricity imports is limited, and thus has attempted to find alternate electricity sources in the region. Iraqi parliamentary speaker Mohammed al-Halbusi traveled to Kuwait in February and discussed the possibility of importing electricity to Iraq. In another meeting with the Kuwaiti ambassador in Baghdad, Salem Ghassab al-Zamanan, Halbusi thanked the Kuwaiti government for its efforts to improve the situation in Basra, particularly in the fields of electricity and water. Iraq is also considering importing electricity from Saudi Arabia.

Washington is tightening the noose on Iranians in Iraq and the region. It recently added the Islamic Revolutionary Guard Corps (IRGC) to its list of foreign terrorist organizations. This will affect the Iraqi Shiite militias that are working under the Popular Mobilization Units, as they are in direct contact with the IRGC and Quds Force commander Qasem Soleimani.

The US charge d’affaires in Baghdad Joey Hood warned the Iraqi militias receiving support from the IRGC that the impact of US actions against Iran will affect them as well. “It is not normal for a Revolutionary Guard to be coming into another country and doing things without coordination with that government and trying to destabilize it, and weaken the sovereignty of that government,” Hood said.

Meanwhile, a group of Iran-backed Shiite militias slammed the United States on April 13 for adding the IRGC to the terrorist list. “We reject this action from America and say we have honor to be in the Islamic resistance that fought and beat terrorism,” a spokesman for the Fateh coalition, which is made up of Popular Mobilization Units factions, said in a statement from the home of Iran's consul general in the city of Najaf.

Abdul Mahdi seeks to maintain balance between the conflicting parties and avoid Iraq becoming a battleground between Iran and the United States.

As Iraq keeps its relationship with Iran at the highest level, Iraq-Saudi ties are growing rapidly. The Iraqi Council of Ministers approved April 9 a Saudi request to open a consulate in Najaf.

In his recent trip to Tehran, Abdul Mahdi made clear that Iran wouldn't dictate their demands to Iraq. Iranian Supreme Leader Ali Khamenei urged Iraq to demand that US troops leave the country “as soon as possible." Abdul Mahdi, according to a statement issued by his office, replied, “Iraq rejects being a part of regional and international axes. Iraq wants to keep its good relationship with all without being a part of an axis against the other."

In his five-day trip to Washington last Month, parliamentary speaker Halbusi said US military support is vital in combating terror groups. "The continuation of US support to eliminate the remaining sleeper cells and extremist ideologies are vital to ensuring that an Islamic State resurgence is contained," he said.

Abdul Mahdi refused to pay its gas and electricity fees in US dollars or euros to Iran, as Iran had requested during Abdul Mahdi's trip to Tehran. He also informed officials in Tehran that the project to connect Iran's railway to Syria through Iraq should be under Iraqi supervision and should not include transferring arms or selling Iran’s oil in a way that violates US sanctions.

Iraq is trying to maintain impartiality in the intensifying conflict between Iran and the United States. However, questions remain: Will Iraq's efforts successfully curb Iran's influence in the country? Or will Iraq eventually be turned into a battleground between the two parties?