US sticks Iraq in middle by calling Iran's IRGC terrorists

Iraqis are divided on the recent US action against Iran's Islamic Revolutionary Guard Corps, as some back Iran while others fear that a US-Iran conflict will engulf Iraq. 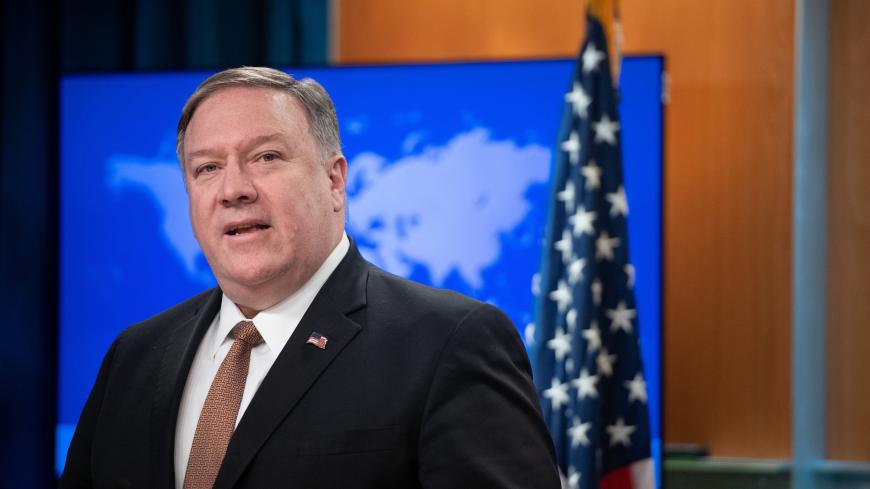 US Secretary of State Mike Pompeo announces that the United States will designate Iran's Islamic Revolutionary Guard Corps as a foreign terrorist organization during a press conference at the State Department in Washington, April 8, 2019. - SAUL LOEB/AFP/Getty Images

After US President Donald Trump designated Iran’s Islamic Revolutionary Guard Corps (IRGC) as a foreign terrorist organization, all eyes turned to Iraq, where thousands of US troops remain and many armed factions operate with the IRGC’s support.

Shortly after the April 8 announcement, the US Embassy in Iraq clarified what Washington wants Iraqi authorities to do in this regard.

“This designation makes it clearer and clearer that people can have a relationship with the problematic parts of the Iranian government, like the IRGC, or they can have a relationship with the United States and our financial system, but they cannot do both at the same time,” Joey Hood, charge d'affaires of the US mission in Iraq, told reporters April 11.

“If they put the interests of the Revolutionary Guard before the interests of Iraq, they could be caught [up in] these designations,” he said in reference to the Iraqi parties and armed groups close to Iran.

Iran took retaliatory measures in response to the US action, which the IRGC called "the black decision by Trump and the idiots that surround the American regime." On April 9, Tehran designated the US Central Command a terrorist organization, thus placing all US forces in Iraq on the Iranian terror list. The IRGC then promised to “utilize a strategy of meeting aggression with aggression against the enemy and teach it unforgettable and painful lessons."

The Iraqi factions and parties close to Iran backed the IRGC. The Badr Organization said April 9 that the US decision “will lead to more clashes and wars.”

A number of Iraqi Shiite factions showed solidarity with the IRGC, holding a conference April 13 at the home of Iran's consul general in the holy city of Najaf, denouncing the inclusion of the IRGC on the terrorism list.

The Hezbollah Brigades responded by calling the United States “the world's greatest sponsor of terrorism” and reiterating calls for US troops to be driven out of Iraq. “The presence of US military forces in Iraq poses a threat to our national security and the security of our brothers,” the statement added.

The Hezbollah Brigades is an Iraqi faction very close to Hezbollah in Lebanon and has been on the US terrorism list since 2009.

Pressure has recently increased on the Iraqi government regarding the US presence in Iraq. During Iraqi Prime Minister Adel Abdul Mahdi's visit April 6 to Iran, Iranian Supreme Leader Ali Khamenei urged Iraq to call on US forces to leave Iraq “as soon as possible.”

This call did not go unnoticed in Iraq, especially after the IRGC was classified as a terrorist organization. On April 8, Hezbollah Brigades spokesman Jaafar al-Husseini said, “Imam Khamenei commanded the removal of US forces from the region.”

The escalation on both sides has sparked concerns among Iraqi parties who fear Iraq will turn into a battlefield for the United States and Iran.

Osama al-Nujaifi, a former speaker of the Iraqi parliament, tweeted April 9, “A storm will hit the region in the wake of the US decision. The authorities must ensure that Iraq does not turn into an arena of confrontation or a battlefield" for something it has nothing to do with.

The current situation brings to mind the confrontation between US forces and Iran-backed Shiite armed factions during the US occupation of Iraq (2003-2011). But there is a big difference between the political situation in Iraq back then and now. Unlike that period, when the United States was the de facto ruler of the country, many of these factions now have a significant presence in Iraq's political arena, be it through the legislature, the government or the bureaucratic structure of the country in general. They have something to lose, and a military confrontation would threaten many of the benefits they get through their influence in Iraqi politics.

The parties that want to clash with US forces on Iraqi territory now have a difficult task to perform, which is garnering the support of the Iraqi people, who are sick and tired of the wars that have wreaked havoc on their country. The Iraqi people see Iran as one of the causes behind the deteriorating situation in the country. In November, The Washington Post published a poll that showed low Iraqi public support for Iran, even among the Shiite community.

Those parties will need the public's support in coming elections.

At the same time, it's unclear to what extent the United States is willing to place more Iraqi actors on the terrorism list at a time when it maintains contacts with many of them despite their close ties to the IRGC.

For example, many US politicians met with Badr Organization President Hadi al-Amiri throughout the long years when he held various important positions that had a clear effect on the course of political action in the country. The Badr Organization has close ties to the IRGC, and Amiri demanded in 2015 that a statue be erected in Iraq for Qasem Soleimani, commander of the elite IRGC's even more-elite Quds Force. In other words, the possible inclusion of groups such as the Badr Organization on the terrorism list would deprive the United States of its contacts with them.

As Iraq suffers from an already fragile situation, a misstep taken by either side could throw the country into another round of violence.