As Islamic State militias have become active again in different areas of Iraq, the debate over ejecting US forces is on the rise among Iraqi politicians. 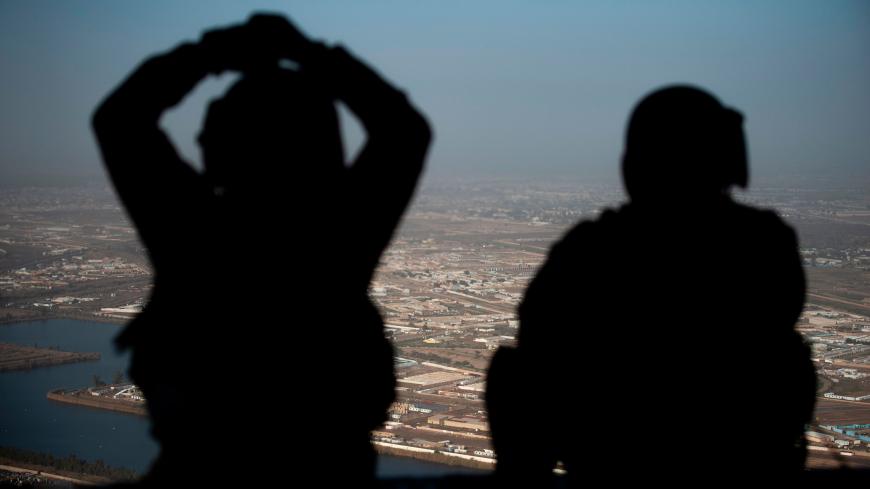 US Army helicopter crew members look out of their Chinook helicopter as they fly from the US Embassy to Baghdad International airport, over Baghdad, Iraq, Jan. 9, 2019. - ANDREW CABALLERO-REYNOLDS/AFP/Getty Images

As the Islamic State (IS) appears to be losing its last stronghold in Syria, but guerrilla IS cells are cropping up in Iraq, controversy is growing about Iraq's need for foreign forces, especially US ones. One politician even accused the United States of plotting to foster an IS revival.

Some 50 Iraqi parliament members submitted a request to the parliament speaker Feb. 19 to discuss and review the 2008 Strategic Framework Agreement between Iraq and the United States, which allows the presence of US forces in Iraq. Iraqi parties close to Iran have escalated their rhetoric against the US presence since US President Donald Trump's statements Feb. 3 on the role his forces play in watching Iran’s moves in the region.

Joey Hood, charge d'affaires of the US mission in Iraq, told the media Feb. 19 that the US military presence in Iraq involves only around 5,200 advisers and trainers, and no actual combat troops.

But some Iraqis claim there are more US military personnel in the country than that. Jaafar al-Husseini, a spokesman for the Iran-backed Iraqi paramilitary group Kata'ib Hezbollah, told Lebanon's Al-Mayadeen news Feb. 18 that the group “is active in the border areas with Syria to follow up on the Americans’ movements.” He said, “There are 31 US bases" and 34,000 US service members in Iraq. Kata’ib Hezbollah is among the Shiite groups most opposed to the US presence in Iraq and has close ties to Lebanon’s Hezbollah.

Hood denied the presence of any American bases in Iraq, stressing that US forces returned to the country in 2014 at the request of Iraq's federal government after the Islamic State took over part of the nation; he said the US military will leave immediately upon the Iraqi government’s request. He also said video footage that was used to back up claims that large numbers of US troops had been coming to Iraq was more than a decade old.

However, a BBC Persian correspondent reported Feb. 13 that the headquarters of US-Iraqi joint forces in the Iraqi border town of Qaim was only flying the US flag, whereas it had only flown the Iraqi flag before. She reported that no Iraqi troops were in sight.

Despite some Iraqis' opposition to a US military presence, the United States is trying to strengthen military relations with the country's leaders. High-level US delegations have traveled to Baghdad to discuss the role of US forces in Iraq.

Gen. Joseph Votel, commander of the US Central Command, arrived Feb. 17 in Iraq and met with senior Iraqi military figures, including Prime Minister Adel Abdul Mahdi, who also is the commander in chief of the Iraqi armed forces.

The prime minister's office issued a statement the same day saying both sides discussed “cooperation in the war against the terrorist IS, and [military] training,” which indicates the United States is determined to keep its military presence in the country.

The United States seems to have no intention of leaving Iraq in the near future. According to press reports, US forces have recently expanded their presence in some areas of Iraq, including in Anbar province bordering Syria, such as in Qaim.

The United States is well aware of the extent of differences among Iraqi authorities about the US future in Iraq, which gives US forces the leeway to plan to stay in the country. Recently, former Interior Minister Baqir al-Zubeidi, who belongs to the Islamic Supreme Council political party close to Iran, and the Iraqi Counter Terrorism Service have been airing their disagreements in the media.

“US forces in the Ain Assad Air Base [in Anbar] have [only this] mission: to support and train Iraqi security services, and aid intelligence [services] in monitoring IS movement. Their withdrawal from the country will happen by a decision from the Iraqi government when it deems it right,” Naaman added.

“The US advisory presence is now needed during the stabilization and peace phase. Our forces need to build capacity, increase combat capabilities and improve security and intelligence partnerships,” he said.

Military experts aren't the only ones calling for a US presence at this phase. Some political parties think Iraq should benefit from US forces' services.

Saleh al-Mutlaq, head of the Iraqi National Dialogue Front, a Sunni political party, said in a Feb. 19 interview on Al-Hurra TV that as a result of the presence of militias and the fragile security situation, the exit of US forces is not a priority for the Iraqi state.

All the calls demanding a US withdrawal are coming from political blocs that have been supported by Iran for 15 years, he said, adding, "It is in their interests to keep the status quo so they [can] continue to loot the wealth of the country."

In a serious development, some parties close to Iran have stepped up their rhetoric against those who don't support a US withdrawal.

In a clear threat, parliament member Talib Salim of Al-Sadiqoun Bloc of the League of the Righteous on Feb. 16 criticized those calling for the US to remain in Iraq, calling them “traitors and slaves for the dollar.”

Meanwhile, Muqtada al-Sadr, the leader of the Sairoon coalition — which won the most seats in the last parliamentary elections — complicated matters further when he called for a new law to schedule the simultaneous withdrawal of Iranian, Turkish and American forces from Iraq.

This proposal, however, seems to be a long shot, given the deep differences in the Iraqi parliament. Many Sunni and Kurdish members, and even some Shiites, don't support a US withdrawal.