Iran’s supreme leader has called on the nation to vote in the Feb. 21 general elections to serve both their country and their religion. 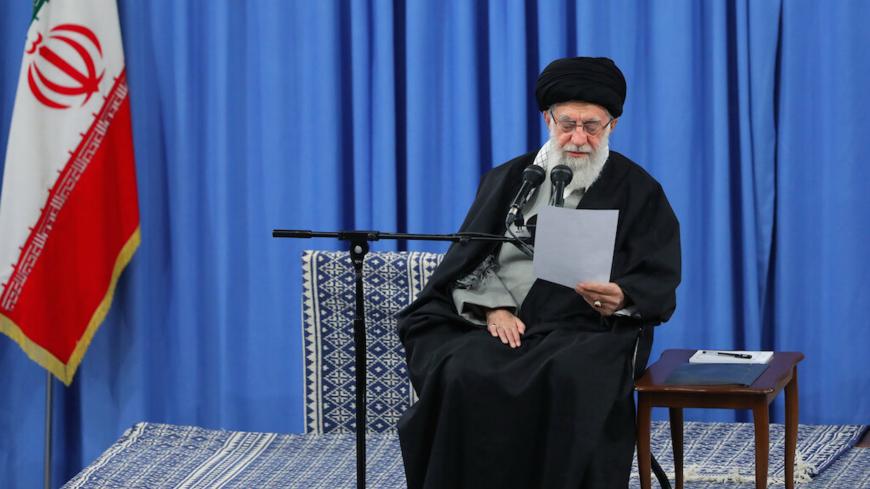 Iran's Supreme Leader Ayatollah Ali Khamenei speaks at an event marking the anniversary of the 1978 Popular Uprising of the People of Tabriz, in Tehran, Iran, Feb. 18, 2020. - Khamenei.ir

Three days before Iran’s parliamentary elections, the country’s Supreme Leader Ayatollah Ali Khamenei renewed his call on the nation for a show of support to the clerical establishment. Khamenei told Iranians again in a Feb. 18 speech in Tehran that voting was not just a national responsibility but a religious duty as well.

“America” and “the enemy,” recurrent motifs in Khamenei’s speeches, were central to his latest address at yet another “critical time” for Iran. “The polls will defuse the US’ evil intentions,” he told the crowd, describing a large turnout as a sign that Washington’s pressure campaign against Tehran has not worked. “A weak parliament will adversely change the course of Iran’s fight against the enemies,” he added in an attempt to convince Iranians that their security depends on their participation in the vote.

Campaigning is underway across Iran, there there are no indications of any heated competition in the capital Tehran and the other major cities. Weeks ahead of the vote, the hard-line Guardian Council barred a majority of prominent candidates representing the Reformist camp from the race.

The one-sided contest is now widely expected to produce a new parliament controlled by the hard-liners who have relentlessly opposed the policies of moderate President Hassan Rouhani and his fragile nuclear deal, one which has been in tatters since his American counterpart Donald Trump walked out of it in May 2018.

At a Feb. 17 campaign gathering in central Tehran, ultraconservative speakers sharpened their attacks and warned Rouhani that the upcoming parliament will strive to bring him down. The hard-liners have long pressed the president to abandon his engagement with the West, whose promises of economic relief, they argue, have given Iran “nothing.”

While 58 million Iranians in the country’s population of 83 million are eligible to vote in the Friday polls, many obervers doubt the country will see the same large turnout that has marked many past Iranian elections, including the one that sent Rouhani to office for a second time in 2017.

In the run-up to the vote, Iranians have taken to the streets to express their discontent over economic matters and a host of other grievances. Back in November, the state’s response to protests over higher fuel prices turned unprecedentedly brutal. While unofficial reports have put the death toll at up to 1,500, the government continues to ignore calls to release its own report.

During a Feb. 16 presser, Rouhani denied those reports and threw the ball into the court of the country’s judiciary-affiliated Legal Medicine Organization. The organization, however, took less than a day to respond that they already submitted their report to the Interior Ministry, which is responsible for making the data public.