Zarif says 'negotiating table is there'

Speaking to journalists at the Iranian mission to the UN, Iran's Foreign Minister Mohammad Javad Zarif revealed details about correspondence with the Donald Trump administration over a potential prisoner exchange. 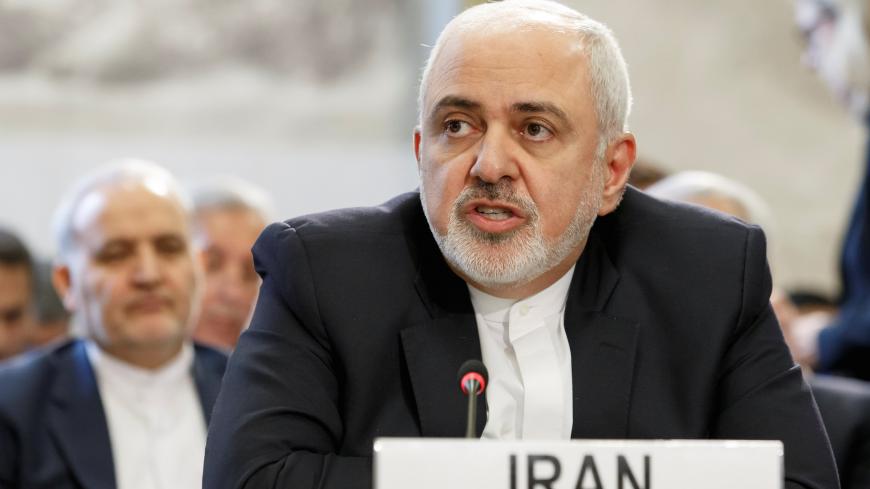 Iranian Foreign Minister Mohammad Javad Zarif delivers his statement during the Geneva Conference on Afghanistan, at the European headquarters of the United Nations in Geneva, Switzerland, Nov. 28, 2018. - Salvatore Di Nolfi/Pool via REUTERS

NEW YORK — Iran’s Foreign Minister Mohammad Javad Zarif acknowledged today that he had received a letter from Robert C. O’Brien, US special presidential envoy for hostage affairs, asking for the release of detained US citizens.

Zarif’s confirmation that he had received the US envoy's letter comes after he publicly proposed a prisoner swap yesterday, and said he was authorized to negotiate such an exchange.

He also said he had privately proposed a prisoner swap to the Trump administration six months ago, but had received no response.

Asked by Al-Monitor if he had not received a letter from O’Brien, Zarif acknowledged that he had, but portrayed the letter as one-sided.

“Know what the letter said? It said please release” the detained Americans, Zarif told a group of journalists at the Iranian mission to the UN in New York today. “It was not an offer.”

“The trend of thinking in Washington is to expect us to do unilateral actions,” Zarif added.

While the US-educated Zarif offered familiar critiques, there also seemed to be in his remarks a new emphasis on Iranian willingness to negotiate and Iran still being at the negotiating table, which the United States walked away from when it quit the nuclear deal last year.

Regarding several US Democratic presidential candidates saying they would have the United States rejoin the Iran nuclear deal if they won, Zarif said Iran can’t rely on that.

“We cannot rely on what will happen two years down the road,” he said. “We don’t know what will be the policy of a new administration, Democratic or Republican.”

Correction: April 26, 2019.  An earlier version of this story incorrectly said that Zarif had also asked his deputy to write a letter to Secretary of State Mike Pompeo asking for the release of Iranians detained for alleged violations of US sanctions laws. A spokesman for the Iran mission to the UN said Friday that Zarif said that he could have directed his deputy to write such a letter to Pompeo, but in fact did not, and his deputy did not send such a letter.