Iran has strongly condemned the US move to label part of its armed forces as a foreign terrorist organization, responding by designating US Central Command and affiliated forces as a “terrorist group.” 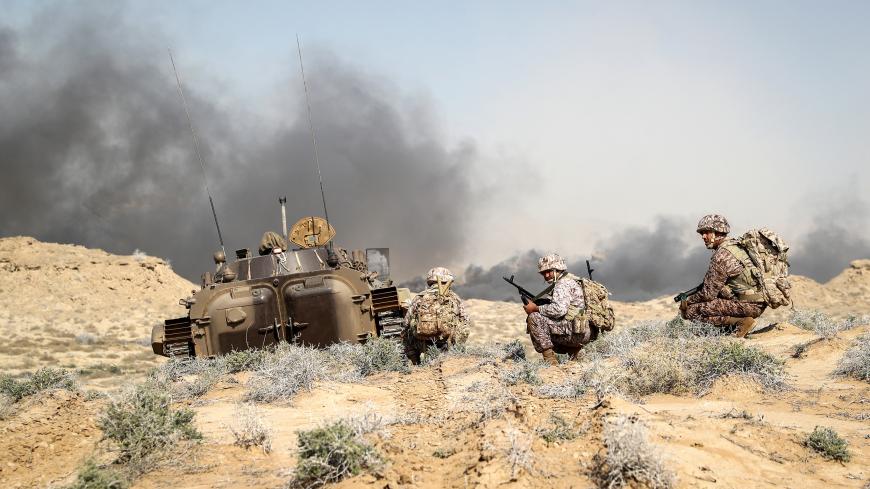 Military units of the IRGC Ground Forces are seen as they launched war games in the Gulf, Dec. 22, 2018. - Hamed Malekpour/Tasnim News Agency via REUTERS

US Secretary of State Mike Pompeo announced today that the United States would designate the Islamic Revolutionary Guard Corps (IRGC) as a “foreign terrorist organization.” The Wall Street Journal reported April 5 that as early as this week President Donald Trump would designate the IRGC as a “foreign terrorist organization,” an unprecedented move against a national armed force.

Iranian officials, as expected, have condemned the move by the United States. One of the first responses came from the commander of the IRGC, Mohammad Ali Jafari. “In case of such stupidity, the army and security forces of America in West Asia will no longer have the calm of today,” Jafari said April 7. When asked what the IRGC would do, Jafari replied, “If the Americans make such a stupid decision and endanger our national security, in accordance with the policies of the Islamic Republic of Iran, we will make operational similar countermeasures.”

Ebrahim Raisi, the newly appointed judiciary chief and a rising star in the Islamic Republic, condemned the potential designation and accused the United States of being a supporter of terrorism. “A country that has nothing but arming, guiding and giving refuge to terrorists in its track record is labeling the armed forces of another country terrorist,” Raisi said. He added that such an action “has no political or legal validity,” but asked the Foreign Ministry and the Supreme National Security Council to respond with similar measures.

Foreign Minister Mohammad Javad Zarif accused those of pushing Trump to label the IRGC a terrorist organization of being “Netanyahu Firsters,” after the hard-line Israeli prime minister who has advocated a confrontational US-Iran policy. He added that those who push the United States into such decisions “fully understand its consequences for US forces in the region. In fact, they seek to drag [the] US into a quagmire on [Netanyahu’s] behalf.”

Two hundred and fifty-five members of Iran’s parliament signed a statement in support of the IRGC in the likelihood of it being labeled a foreign terrorist organization. “The IRGC is one of the great achievements of the Iranian nation,” the statement began, praising the IRGC for its role in the Iran-Iraq War of the 1980s, reconstruction efforts after the war and its role in Syria and Iraq, which it referred to as “advisory help for regional governments in the fight against terrorism.”

The statement continued, “Iran’s national security and its armed forces have been a red line for parliamentarians.” It added that if the United States would designate the IRGC as a foreign terrorist organization, Iran’s parliament would pass a similar bill so that they would “regret their misplaced and idiotic action.”

Heshmatollah Falahatpisheh, head of the parliamentary National Security and Foreign Policy Commission, also said that parliament would respond with a similar bill. As did other Iranian officials, Falahatpisheh accused the United States of supporting terrorists, but he quoted Trump in doing so: “As Trump has admitted, the Americans created Daesh [Islamic State] and the reality is that the IRGC, the army and our military forces defeated Daesh.”

Moreover, in a statement published soon after the US announcement, the Supreme National Security Council — the top decision-making body in Iran — strongly condemned the move as “illegal and dangerous,” declaring that it has designated the United States as a “state sponsor of terrorism” and that “US Central Command and all affiliated forces are a terrorist group."

The IRGC was already designated as a supporter of terrorism and it is not clear exactly what the new designation means. It is also not clear what Iran's parliamentary bill would entail. However, the IRGC has economic assets and any European country seeking to do business with Iran may be more disinclined to make such economic ventures.