The Sept. 22 terrorist attack in the southwestern city of Ahvaz has raised an unprecedented call for Iran’s military and security forces to be held accountable. 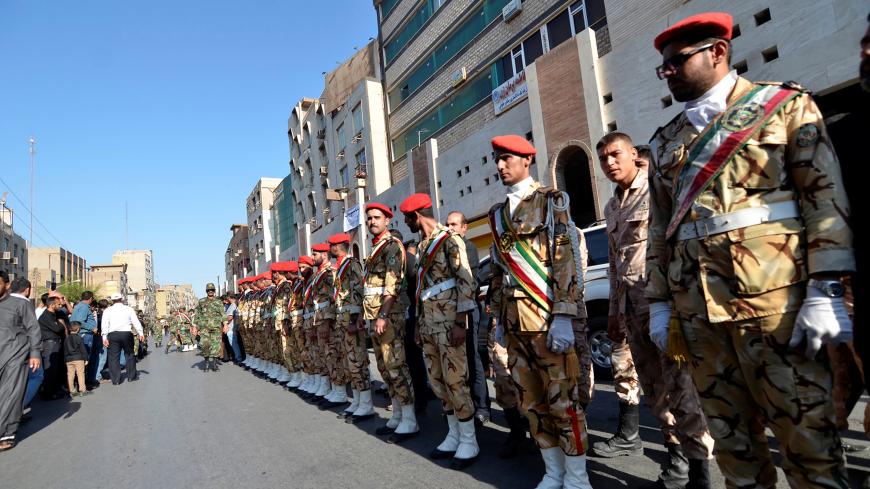 Security forces stand during a funeral of the victims of the terrorist attack that killed two dozen people, in the streets of the southwestern Iranian city of Ahvaz, Sept. 24, 2018. - Tasnim News Agency/via REUTERS

Nearly three weeks have passed since a deadly terrorist attack targeted a military parade in Iran’s southwestern city of Ahvaz. Some say this attack was the result of negligence on the part of the military and security forces, with resulting calls for these organizations to be held accountable. This is a somewhat new concept in Iran, as the military and security forces have always been immune to criticism under the rationale that the country owes its security to them and that demanding such answers from this sector is out of bounds.

The Sept. 22 attack saw four terrorists open fire on an annual military parade, killing two dozen people and wounding over 90 others in the capital of Khuzestan province. An investigation was immediately launched to see why and how this attack had happened. Ali Sari, a member of parliament representing the city of Ahvaz, was the first official to demand accountability in a Sept. 24 interview with the government-run Iran daily. He said, “We have to frankly ask ourselves who oversees security and then ask them why this happened. After [last year’s Islamic State] attack on parliament, we did not question those responsible for maintaining security. But now that this bitter incident has happened again, they need to explain where the potential negligence stemmed from.” Sari also revealed that many residents in Khuzestan possess firearms, and that no one has done anything about it. He said military and security officials must also accept their negligence in this matter.

Meanwhile, parliament held a closed session Oct. 3 to examine the dimensions of the attack. During the session, Iranian security personnel announced that over 30 individuals of various ranks and positions who oversaw safety at the parade had been dismissed and referred to court. News of this announcement was made by member of parliament Gholam Ali Jafarzadeh Emenabadi, who highlighted the “weakness of intelligence and security observations” during the session.

Behrouz Nemati, spokesman for the parliament’s presiding board, said security officials presented a report during the Oct. 3 session. Nemati said, “The respective officials declared that undoubtedly the incident occurred partly due to the inaction of those in charge, and some of them have been referred to the courts.” He said apologies were made during the session, but did not clarify by which security, intelligence or military organization or official. The lawmaker went on to say, “Given the various takfiri groups in Iraq and Syria, there should be no holes to be exploited by the terrorists.” He said more serious measures need to be taken.

Ahvaz member of parliament Homayoun Yousefi also called on those responsible for not preventing or immediately stopping the terrorist attack in Ahvaz to provide answers, while also stopping short of naming a specific organization.

Prior to the Oct. 3 session, video footage of the attack had been shown to parliament’s national security and foreign policy commission, raising criticism among some lawmakers. Hossein Naghavi Hosseini, an opponent of President Hassan Rouhani’s administration and a firm supporter of Iran’s military and security organizations, was one such individual. Naghavi Hosseini said security forces had failed to act decisively to stop the attack. “For 12 minutes, four terrorists easily fire shots, come and go, reload their weapons, engage in dialogue and no one even fires back at them,” he said.

The head of the commission, Heshmatollah Falahatpisheh, after seeing the video footage, said, “There were eight or nine sharpshooters who could have killed the terrorists within 30 seconds ... but one of them couldn’t believe there was a terrorist attack and thought blanks were fired and said he had received no order to shoot.”

Both Naghavi Hosseini and Falahatpisheh said the security forces had hesitated to intervene even though the terrorists were firing deadly shots at their victims.

Similar talk of negligence on the part of Iranian security forces was also brought up after the June 7, 2017, attack on the Iranian parliament, but the dimensions of those discussions were nowhere close to this. While some political figures were unhappy with how the security apparatus had performed last year, their discontent was never expressed in detail and in public.

Iran’s military and security forces have the backing of those in power and thus have rarely been criticized over their performance. Their immunity became even greater following the emergence of the Islamic State (IS) in Syria and Iraq and the resulting role of the Islamic Revolutionary Guards Corps (IRGC) in the fight against IS and preventing the group’s advance into Iran. Supporters of Iran’s military and security forces argue that these organizations were critical in shoring up the nation's defenses. As such, they believe that criticism directed at the military — and especially the IRGC — would be tantamount to collaborating with those who want to create insecurity in Iran.

In recent years, there have been instances where some Reformist figures have criticized Iran’s military policies in Syria and Iraq. However, these individuals have quickly come under attack by pro-military factions and have been called IS supporters. Rouhani himself was harshly criticized by his opponents during the 2017 presidential elections when he said, referring to the IRGC, “They write slogans on missiles and show an underground city in order to topple the Joint Comprehensive Plan of Action.” Rouhani's opponents even accused him of rising up against the supreme leader.

So far, Iran’s military and security organizations have been immune from any form of accountability, and have not even had to inform the public about their extensive economic activities. One such example is the Khatam al-Anbiya Construction Headquarters. This IRGC-controlled firm is one of Iran's largest contractors in industrial and development projects, and although there are many questions surrounding its activities and contracts, there has never been a clear answer provided.

With such a history, it seems that the recent wave of lawmakers and other politicians who are demanding accountability from the nation's security apparatus is something new. Still, it is not clear whether the relevant organizations will ultimately provide the public with a clear response to the criticisms they are facing.