Iranian officials have denied that those behind the attack on the Sept. 22 military parade in Ahvaz have been executed. 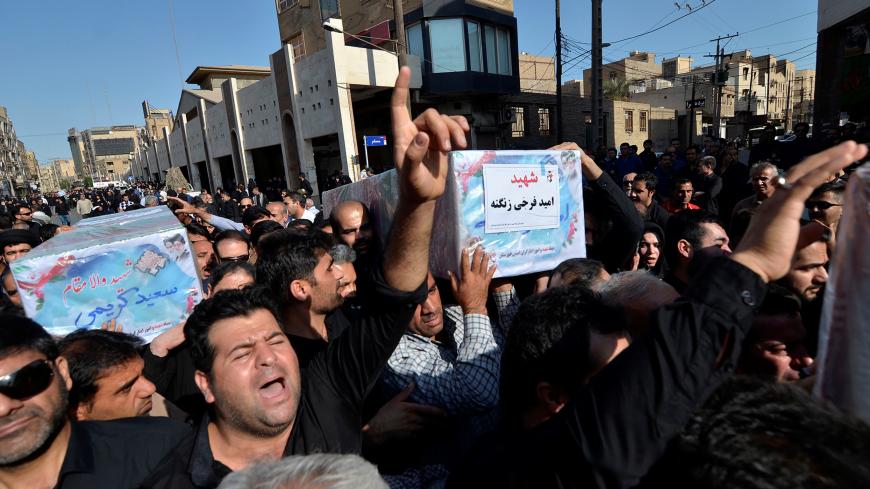 People carry coffins during a funeral of the victims of an attack that killed 25 people, in the streets of the southwestern city of Ahvaz, Iran, Sept. 24, 2018. - Tasnim News Agency/via REUTERS

Gholamreza Shariati, the governor of Khuzestan province, denied that the individuals who were behind the Sept. 22 terrorist attack on a military parade in Ahvaz were executed. This is just the latest news to spill over from the attack in Khuzestan province that killed 25 people, including bystanders and veterans participating in the parade.

Days after the attack, Iran’s Intelligence Ministry announced they had arrested a “team” consisting of 22 individuals who they claimed were “responsible” for the attack. The ministry also said they had confiscated explosives as well as military and communications devices. Mahmoud Alavi, Iran’s intelligence minister, said that “a major part of the actors” behind the Ahvaz attack were arrested in the roundup of the 22 individuals.

When asked by reporters about the fate of the 22 individuals arrested, Shariati said they had been “charged” but that specific information regarding their status must be referred to the prosecutor’s office. Mahmoud-Javad Jamali, a parliamentarian and member of Iran’s National Security and Foreign Policy Commission, also denied that the arrested individuals were executed and blamed the media for creating the news. He said the case has not been discussed at the National Security and Foreign Policy Commission, but that it would be addressed given the reports of their execution.

After the attack, both Arab separatists and the Islamic State claimed responsibility for the attack. Iran accused European countries of harboring those behind the attack, including Denmark, the Netherlands and Britain. In October, Denmark’s intelligence service PET claimed to have foiled an attack by Iran’s Intelligence Ministry on three individuals belonging to the Arab Struggle Movement for the Liberation of Ahvaz. Denmark recalled its ambassador after the alleged plan.

Tehran denied the allegations of planning the assassination of the individuals in Europe and called it a plot. On Nov. 7, Denmark then arrested three individuals who praised the attack on the military parade.

In other news, the search for a mayor of Iran’s largest city and capital has been reduced to two candidates after the latest voting by the 21-member Tehran city council. Former Minister of Roads and Urban Development Abbas Ahmad Akhoundi and Reformist politician Pirouz Hanachi received the top two votes and will compete with one another to take over the position.

The office of Tehran mayor has historically been a significant and coveted seat. A number of mayors have used the position to dramatically shape the outlook of the city and elevate themselves to the national stage. Since the August 2017 departure of Mohammad Bagher Ghalibaf, who served as Tehran mayor for 12 years, a strong candidate who can maintain the seat has not yet emerged. The current mayor, Mohammad Ali-Afshani, has held the position since May. The previous mayor, Mohammad-Ali Najafi, served just eight months before that.

It is too soon to determine if the next mayor will be able to maintain the seat or even want to. Given that Akhoundi’s tenure as minister has been under current President Hassan Rouhani’s administration, conservative media has been vocal in their opposition to his candidacy and will likely oppose him if he becomes mayor.