Khamenei appears to point finger at IS for Ahvaz attack

Arab separatists walked back claims of their involvement in the Ahvaz terrorist attack after Iran summoned European countries for hosting them. 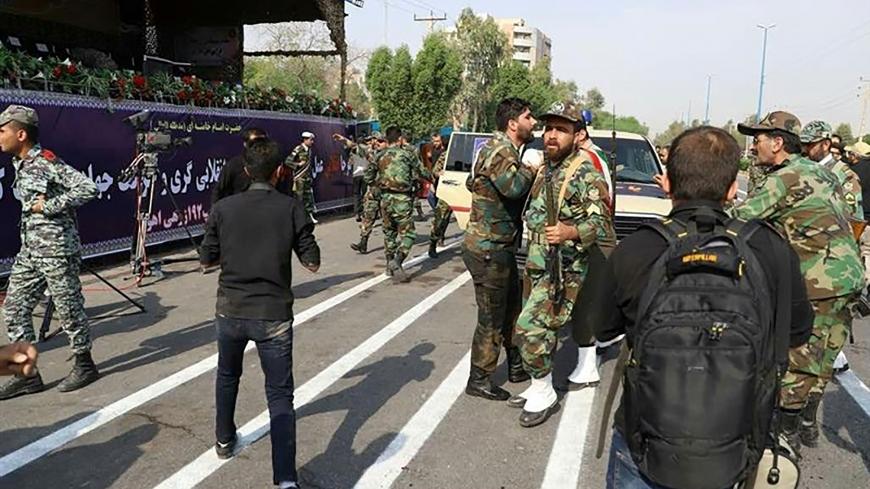 A general view of the attack during the military parade in Ahvaz, Iran, Sept. 22, 2018. - Tasnim News Agency/via REUTERS

While Iranians in the province of Khuzestan held funeral processions for the victims of a terrorist attack on a military parade, there still seems to be a great deal of confusion in the media as to who was behind the attack, causing tension between Iran and a number of European countries.

IS is not the only group to take responsibility for the attack. European-based Arab separatist groups also attempted to claim responsibility, causing the wrath of Iran against their European host countries.

Yaqub Horr Tostari, who claimed to be a spokesman for the separatist Al-Ahvaz movement, called into a Saudi-funded London-based Persian-language station, Iran International, to take responsibility. Tostari said that a group called "the National Resistance of Ahvaz" carried out a “legitimate attack.” Tostari denied that his Al-Ahvaz movement was behind it but rather described the National Resistance of Ahvaz as an umbrella group. The Islamic Republic News Agency reported that the Patriotic Arab Democratic Movement in Ahvaz, a separatist group, had also taken responsibility.

Iran’s Foreign Ministry spokesman Bahram Ghassemi criticized European double standards with regard to terrorism, saying, “It is not acceptable that so long as these terrorist groups have not committed a crime on European soil [they] are not added to the blacklist of terrorist groups.” Ghassemi noted that Denmark and the Netherlands were previously warned about the Arab separatists who either claimed or promoted the attack, and that Iran expects them to be arrested and tried.

At the funeral processions today for the victims, Iran’s Intelligence Minister Mahmoud Alavi said that a number of individuals behind the attack were arrested. He did not give further information.

Iran’s Supreme Leader Ayatollah Ali Khamenei also spoke about the attack during a meeting with Iranian athletes. “There will be a harsh punishment for the agents behind this attack,” Khamenei said. He added that the terrorists in the Ahvaz attack were the same as those in Syria and Iraq, in that they are protected by the United States and funded by Saudi Arabia and the United Arab Emirates. Interestingly, this is how Iran typically describes IS.