Using missiles and armed drones, Iran said it sought to send a message to terrorist groups and their sponsors. 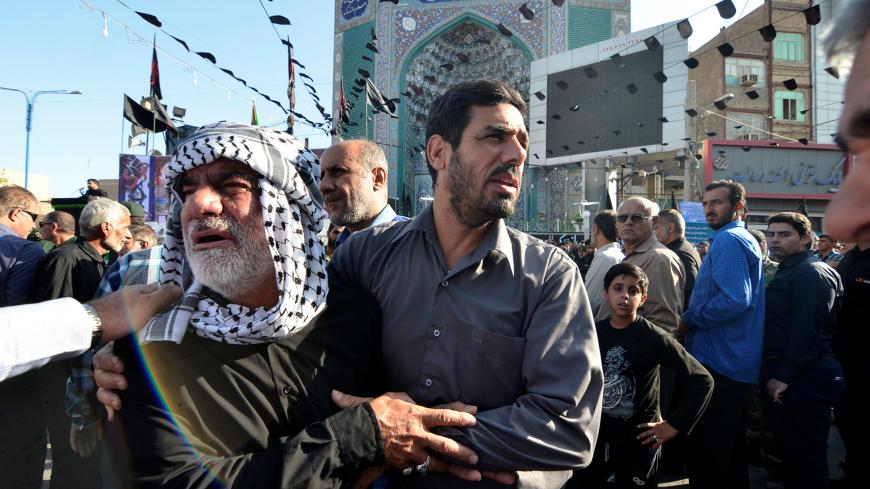 Men mourn during a funeral of the victims of a terrorist attack that killed 25 people, in the streets of the southwestern Iranian city of Ahvaz, Iran, Sept. 24, 2018. - Tasnim News Agency/via REUTERS

The Islamic Revolutionary Guard Corps (IRGC) has responded to the Sept. 22 terrorist attack in the southwestern city of Ahvaz — which both the Islamic State (IS) and Arab separatists claimed — by using missiles and, for the first time outside of its borders, armed drones against targets in Syria.

Iran’s Foreign Ministry spokesman Bahram Ghassemi said after the missile attack, “Any action or movement from the military or political segments is not without a message and certainly has special messages.” He continued, “What can be stated clearly is Iran’s serious determination for countering centers of terrorism, a determination that we saw this morning from the forces of the IRGC.”

Ghassemi did not elaborate on what the message was. The IRGC’s Aerospace Force commander, Amir Ali Hajizadeh, said after the missile launch, “The national security of Iran is our red line, and we will not compromise on this.” He added that the use of missiles and armed drones was meant to be “a lesson to not support terrorists and they should be scared of this situation.” Paraphrasing Supreme Leader Ayatollah Ali Khamenei, Hajizadeh said, “If they hit us once, we’ll hit them twice.”

Hajizadeh did not say who “they” were, but Iran often accuses regional neighbors of supporting extremist groups in the region. The IRGC statement wrote that “takfiri terrorists supported by America” were targeted in the missile attack. Conservative analyst Hassan Rahimpour Azghadi tweeted, “The power of missiles, is actually a guarantor of peace and security. If the arrogance finds out that you do not have the power to defend your nation, it will be tempted to attack you.” The term “the arrogance” is a term applied to the United States.

Despite the message to the United States that the missile launch was in part meant to convey, there were numerous claims of responsibility for the Ahvaz attack. Arab separatists based in Europe attempted to take credit, though they quickly distanced themselves after Iran summoned the ambassadors of their host countries. The terrorist group IS also took responsibility for the attack and released a video of the attackers. Khamenei had earlier said that the attackers were similar to those in Iraq and Syria in that they are “protected” by the United States and funded by Saudi Arabia and the United Arab Emirates. This is how Iran often described IS in Iraq and Syria.

Conservative Iranian media close to the IRGC noted that this was the first time Iran has used armed drones outside of its borders. In a previous missile attack against IS in Syria in June 2017, Iran used drones as surveillance after the attack. This time, however, seven armed drones carrying four missiles each were used.