While the Trump administration said that it was prepared to help Iran following extensive flooding, at the same time it blamed the disaster on "regime mismanagement." 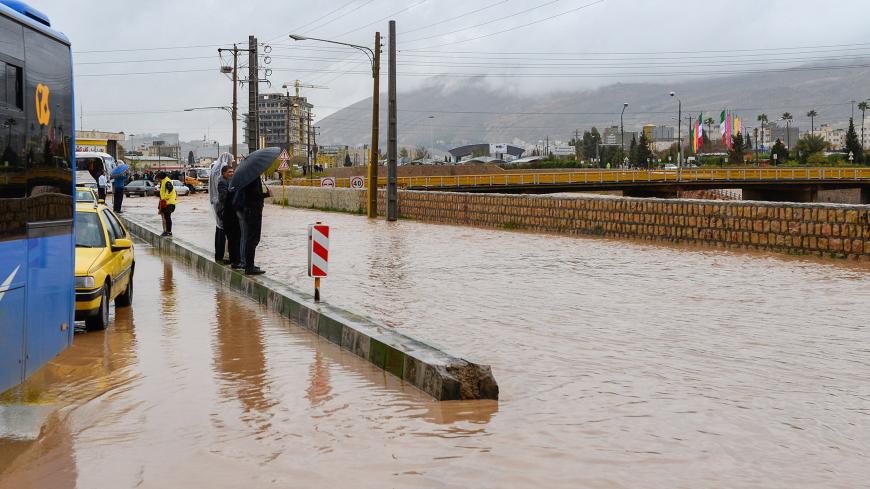 WASHINGTON — Secretary of State Mike Pompeo today extended condolences to the victims of Iranian flooding, and said the United States was prepared to offer help. But in a sign that the offer may have been less than serious, he did so in a statement blaming Iranian regime mismanagement for the flooding, and without any accompanying guidance on how assistance could be directed to Iran without violating US sanctions.

“On behalf of the American people, we offer our condolences to the victims of the recent floods in Iran,” Pompeo said in a written statement. “These floods once again show the level of Iranian regime mismanagement in urban planning and in emergency preparedness."

Pompeo rejected the reported claim by Iran’s Foreign Ministry that US sanctions were preventing donations to Iran’s Red Crescent society.

“The regime blames outside entities when, in fact, it is their mismanagement that has led to this disaster,” Pompeo’s statement continued. “The United States stands ready to assist and contribute to the International Federation of Red Cross and Red Crescent Societies, which would then direct the money through the Iranian Red Crescent for relief.”

Pompeo’s statement of condolence was also followed by a lengthy briefing by US envoy on Iran Brian Hook on how effective the Trump administration’s maximum pressure campaign has been at draining Iranian revenues. The timing of the briefing was related to the coming one-year anniversary of the Trump administration’s withdrawal from the Iran nuclear deal, a US official, speaking not for attribution, told Al-Monitor.

Some Iran watchers and former US aid officials said the US messaging on Iran’s flooding struck them as unusually cynical and tone-deaf compared with the actions of former Democratic and Republican US administrations after natural disasters in Iran.

After the 2003 Bam earthquake, the Bush administration State Department announced “extraordinary steps” to facilitate relief efforts to Iran, including the issuing of a special Treasury Department license, said Esfandyar Batmanghelidj, the London-based founder of the website Bourse and Bazaar, which tracks developments in Iran’s economy.

The 2003 State Department announcement “even included a phone number so you could call to find out how your organization could avail itself of the licenses,” Batmanghelidj wrote on Twitter.

In contrast, “Pompeo has not provided any clarity how anyone else besides the US government can take advantage of a relaxation in certain aspects of the sanctions regime in order to help relief reach Iran,” Batmanghelidj told Al-Monitor.

“The idea that the United States can simultaneously maintain that it cares for the Iranian people but not proactively seek to address the ways sanctions make relief [after the flood] more difficult is disingenuous,” he added. “So at the end of the day I see this as basically … not serious.”

In 2017, after an earthquake in Kermanshah province killed over 500, there was likewise no sanctions relief or gesture of assistance.

The Iranian people are well aware of Iranian regime mismanagement, but the Trump administration does not have credibility to try to advance its agenda on this issue, said Ali Vaez, Iran director at the International Crisis Group.

“The administration is clearly trying to exploit this natural disaster to twist its knife and further discredit the Iranian government. But this is an exercise in futility,” Vaez told Al-Monitor by email. “The Iranian people are fully aware of endemic mismanagement and corruption in their country. The Trump administration, with its travel ban and insults to sense of dignity and nationalism of the Iranian people, has near zero credibility in directing their anger to advance its own agenda.”

As to the blame game, the Trump administration just looks like it is trying to score political points, Vaez said.

“US sanctions are undoubtedly impeding disaster relief,” Vaez continued. “The fact that [the Treasury Department Office of Foreign Assets Control] OFAC hasn't issued a general license (unlike in 2003 after the Bam earthquake) is further evidence that what the administration cares about is not real relief for the Iranian people, but to score a political point.”

“If [Pompeo] really wants to demonstrate goodwill, he would be better off waiving the rules in the US,” Vaez said.

“Certainly if you are sincerely trying to help, you don’t craft a statement in such a way as to blame a country for an act of God,” Konyndyk told Al-Monitor. “It is unseemly. I think even on political terms, this is a deeply counterproductive approach.”

“The point of providing assistance in a situation like this is to alleviate specific suffering, and also to show solidarity,” Konyndyk continued. “If the message that the administration wants to send to the Iranian people is that it’s your government, we don’t like it, [our problem is] not with you, then providing a really sincere, robust, good faith offer of assistance in a situation like this is an important way to show that.”

The Treasury Department did not respond to a query if it would be providing the kind of clarifying guidance that the US administrations did after the 2003 and 2013 earthquakes in Iran to facilitate aid relief.

The State Department said the United States was willing to help, but the burden was on the Iranian government to convince the international banking sector that humanitarian transactions could be safely conducted.

“The burden is on Iran here to open up its dark economy so that banks around the world have more confidence that when facilitating humanitarian transactions, humanitarian goods will actually reach the people,” Palladino said. “The regime makes it very difficult to facilitate humanitarian goods and services.”

Tyler Stapleton, deputy director of congressional relations at the Foundation for Defense of Democracies, said his organization was pleased at the US offer.

“It was the right thing to do,” Stapleton told Al-Monitor. “To the degree Iran was not prepared to deal with an emergency situation of this magnitude seems consistent with the mismanagement inherent in the regime.”