The Obama administration has refused blanket approval for humanitarian assistance that could help save the lives of thousands of earthquake survivors in northeastern Iran. An American well-versed about the issue told Al-Monitor that the White House is sensitive to election-year charges of being soft on Iran. 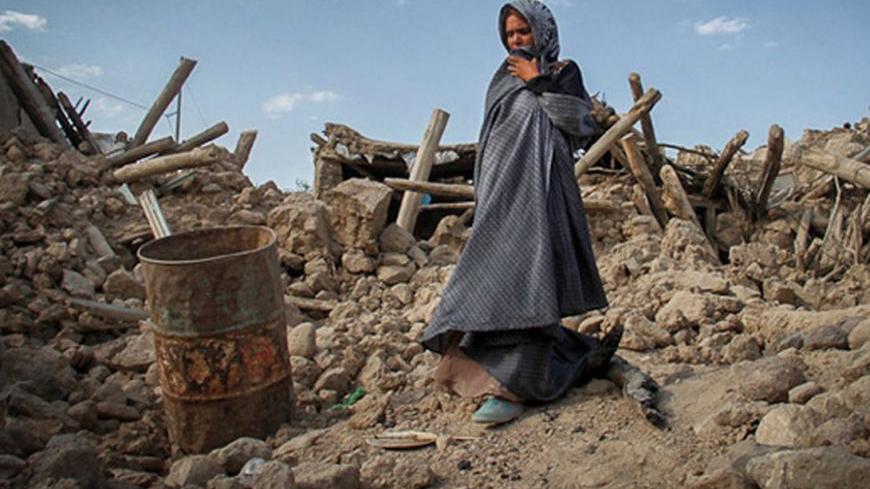 The Obama administration was quick to express condolences for the hundreds of lives lost in earthquakes last weekend in northwestern Iran, but initially refused blanket approval for humanitarian assistance that could help save the lives of thousands of survivors.

On Tuesday, the US Treasury Department announced that it would expedite authorization for private Americans seeking to send aid to quake victims. However, the administration rebuffed requests from Iranian-American organizations to approve a general license similar to what the Bush administration provided in 2003 after a massive earthquake leveled the ancient Iranian city Bam. That means Americans still must obtain specific approval from the Treasury’s Office of Foreign Assets Control (OFAC) to send money to individual Iranians and nongovernmental groups.
An American well-versed about the issue, speaking on condition of anonymity, told Al-Monitor that the State Department supported the request for a general license but that the White House, sensitive to election year charges of being soft on Iran, approved narrower language.

The White House, after initially declining comment, denied this and said it was still "considering options" to assist Iranians.

“There is no truth to this account," Caitlin Hayden, a spokesperson for the National Security Council, told Al-Monitor in an email Tuesday night. "The White House has not vetoed any such license proposals and we are in fact actively considering options while waiting for the Iranian government to decide whether it would like to request assistance for its people. The US Government is continuing to work to determine how we can best help support the Iranian people in this difficult time.”

Even before the earthquakes struck near Tabriz in Iran’s East Azerbaijan province, it was difficult for Americans to navigate the ever more complex web of US sanctions against Iran. Just a day before the quakes, President Obama signed into law yet another bill restricting foreign companies seeking to do business with Iran, the Iran Sanctions, Accountability, and Human Rights Act of 2012.
“Even with the authorizations contained in the regulations and the exemptions … there is no practical way to send either personal remittances, nor is there a reliable way to ship goods to Iran,” Erich Ferrari, a Washington lawyer who specializes on sanctions, told Al-Monitor. “The environment has become chilled to such an extent that a lot of the authorizations are becoming meaningless.”
Hooshang Amirahmadi, president and founder of the American Iranian Council (AIC), which has been soliciting donations for quake victims, said that AIC has applied for a license and that it would be possible for the council to send the money to Iranians via  foreign banks. For ordinary Americans, however, that is not an option, Ferrari said. “You can’t go into your local Bank of America and send money to Iran,” despite Treasury Department regulations that ostensibly permit private citizens to transfer funds to family members.
Iran has not made donating aid easy. In 2003, then Deputy Secretary of State Richard Armitage said in an interview for my book Bitter Friends, Bosom Enemies, that he called Iran’s ambassador to the United Nations in Iran and offered assistance for the victims of the Bam earthquake. Within an hour, Armitage said, the ambassador at the time, Mohammad Javad Zarif, phoned back and accepted the aid, which was flown in by the US military – the first and only time such flights have occurred with Iranian authorization since the 1979 Islamic Revolution.
This time, Iran initially rejected foreign help. President Mahmoud Ahmadinejad's government has been harshly criticized for its inadequate response.
Trita Parsi, head of the National Iranian American Council, told Al-Monitor that the Bush administration not only issued a three-month general license for aid to quake victims, but renewed the license twice, enabling Americans to send help for nine months without needing to get permission.
At the time, of course, Iran was not subjected to the plethora of restrictions it faces now. While most US sanctions passed in recent years contain so-called humanitarian exemptions, Parsi said, the various laws have different language regarding humanitarian matters. “Some have exemptions, some don’t, and there is no clear hierarchy,” he said. Parsi added that the US Customs and Treasury Department have different definitions of what constitutes a donation.  “When we impose so many new sanctions so quickly, it is very difficult for the bureaucracy to figure out what is the law,” he said.
US and most foreign banks are similarly risk-averse, fearing they may be implicated in prohibited activities or simply hurt their reputation among powerful US groups that lobby for sanctions against Iran if they handle any transactions with the Islamic Republic. As a result, Iranian-Americans have trouble sending medicine to their relatives with life-threatening conditions. It is also almost impossible for Iran to purchase spare parts for old American airplanes that are prone to crashing.
While sanctions are supposed to be a tool to persuade the Iranian government to curb its nuclear program, they are increasingly hurting ordinary people. Sanction supporters in the US and elsewhere say they believe that popular pressure will induce the Iranian government to change its policies, but so far that has not occurred.
Barbara Slavin is Washington correspondent for Al-Monitor and a senior fellow at the Atlantic Council, where she focuses on Iran. She tweets  @BarbaraSlavin1.