More than a week after two earthquakes hit Iran, the US Treasury Department has issued a “temporary general license” that will permit American nongovernmental organizations to send up to $300,000 to Iran for humanitarian relief and reconstruction over the next 45 days. Barbara Slavin reports for Al-Monitor. 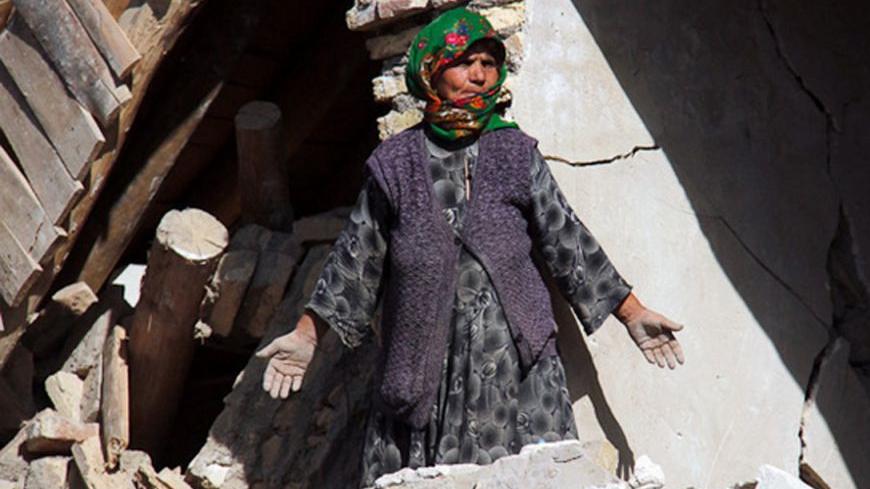 An earthquake victim stands near a damaged house in the earthquake-stricken town of Azerbaijan in Iran, Aug. 13, 2012. - REUTERS/Farshid Tighehsaz/ISNA

More than a week after Iran suffered two earthquakes in its northwestern province of Azerbaijan, the US Treasury Department has issued a “temporary general license” that will permit American non-governmental organizations to send up to $300,000 to Iran for humanitarian relief and reconstruction over the next 45 days.

The Obama administration took the action after complaints from Iranian Americans and others that US banks were reluctant to process such transactions despite the fact that the US regulations exempt humanitarian items from sanctions. The Treasury Department announced last week (Aug. 14) that it would expedite authorization for Americans seeking to help Iranian quake victims, but the announcement didn’t do much good, Iranian Americans say.
Last Friday (Aug. 17), the White House organized a conference call for Iranian Americans and others working on Iran relief who were upset about the difficulties they were experiencing in trying to send money and relief items.
“They’re feeling the pressure obviously but they have difficulty opening up channels,” said one individual who participated in the call but asked not to be named because the discussion was supposed to be off the record. “When we told them the banks said they are afraid [to handle such transactions], one official blamed Congress.”
Although Congress has been responsible for pushing the Obama administration into ever-tougher sanctions, 14 members of Congress, led by Rep. Dennis Kucinich, D-Ohio, lobbied the White House for the regulatory change and a coalition of Iranian American groups and thousands of individuals also signed letters, according to the National Iranian American Council (NIAC).
Trita Parsi, president of NIAC, told Al Monitor on Tuesday (Aug. 21) that he was “very happy” that the Obama administration had decided to issue a blanket approval. “This enables NGOs to send donations directly to other NGOs in Iran,” bypassing the Iranian government, which has said it would accept foreign help but has so far rejected assistance offered by the US government. “Now the onus is back in the Iranian court,” Parsi said.
In a blog post, deputy national security adviser Denis McDonough said the US government remains "ready to provide emergency health care kits, plastic sheeting, blankets, hygiene kits, kitchen sets, plastic water containers and water treatment units, as well as other support through partner NGOs," if the Iranian government changes its mind about official US aid.
Iranian officials have been criticized for a poor response to the quakes, which killed several hundred people and injured several thousand in two villages near Tabriz. Enterprising young Iranians have been driving to the remote area on their own bringing water, clothing, food and medicine.
Under the new US rules here, American nonprofits will be able to collect donations to support earthquake relief and reconstruction and send up to $300,000 to Iran by Oct. 5, said a press release e-mailed by the Treasury Department’s Office of Foreign Assets Control (OFAC). Organizations seeking to transfer more money need to apply for a specific license, OFAC said.
The US action is not as far-reaching as what occurred in 2003 following a much more devastating earthquake in the ancient central Iranian city of Bam. Then the US offered – and Iran quickly accepted – significant help that included aid flown in by US military aircraft. At the time, the Bush administration issued a general license for private Americans and NGOs to assist Iran that was good for three months and renewed the general license twice.
Since that time, however, US-Iran relations have deteriorated to the point that the US government speaks openly of a “military option” against Iran’s advancing nuclear program. A complicated web of sanctions signed into law since 2010 prohibit US banks from dealing with 24 Iranian banks including the country’s Central Bank. Numerous Iranian officials have been blacklisted for alleged connection to Iran’s nuclear program, terrorism and human rights abuses.
Asked about the delay by the Obama administration to approve a general license given that the quakes happened more than a week ago, OFAC spokesman John Sullivan told Al-Monitor, “We were examining a number of options to best serve the humanitarian relief effort including issuing specific licenses for aid as well as clarifying what aid was already covered by our existing guidelines.”
According to the OFAC release, “the general license is a demonstration of administration’s commitment to supporting the Iranian people affected by this tragedy, and responds to the American people’s desire to provide immediate assistance.”
Barbara Slavin is Washington correspondent for Al-Monitor and a senior fellow at The Atlantic Council where she focuses on Iran. Follow her on Twitter: @BarbaraSlavin1.