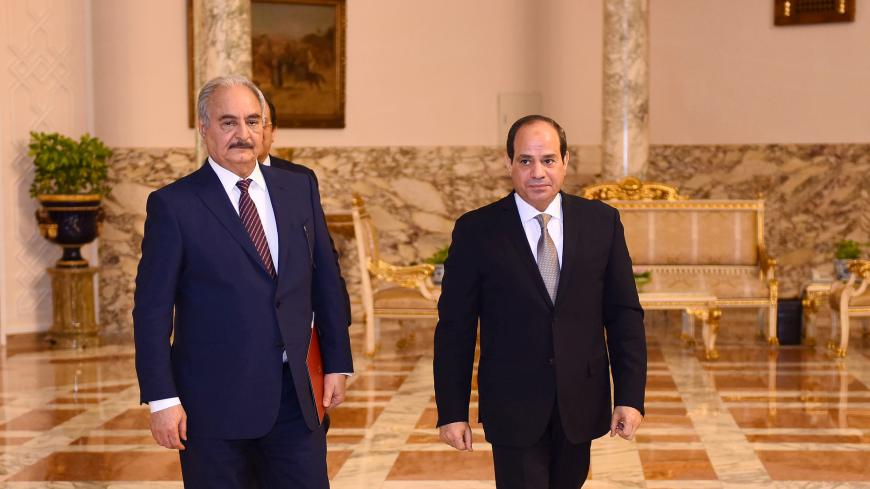 CAIRO — Libyan National Army (LNA) commander Khalifa Hifter visited Egypt on April 14 to meet with Egyptian President Abdel Fattah al-Sisi and discuss new developments in Libya. It was Hifter’s first foreign trip since the start of the military conflict in Libya on April 4.

The meeting between Sisi and Hifter comes after the Libyan army launched on April 4 a military operation dubbed Operation Flood of Dignity under Hifter’s command to seize control of the Libyan capital Tripoli and expel militias. The capital is currently under the control of the Government of National Accord (GNA) led by Fayez al-Sarraj.

A statement issued by the Egyptian presidency following the visit said that Sisi “reiterates Egypt’s support for the efforts made to fight terrorism, extremist groups and militias in a bid to establish security across Libya, pave the way for a stable and sovereign civil state and kick off the reconstruction and restoration process in the country.”

BBC published a report April 5 stating that the Government of National Accord, which is backed by the United Nations, relies on a group of militias for protection and security. This group, according to the report, includes several organizations, most notably the Tripoli Protection Force, Libya Revolutionaries and the Joint Deterrence and Intervention Force.

The UN condemned in August 2018 the militias’ obstruction of the Libyan institutions’ work. It also called on the GNA to launch a campaign against these groups and take the necessary steps to prosecute the responsible parties.

Ahmad Youssef Ahmad, a professor of political science at Cairo University and former dean of the Institute of Arab Research and Studies, told Al-Monitor over the phone, “There is a strong relationship between Egypt and the [Libyan] national army. Egypt’s support for this army is strategic and it backs the military efforts to reunite the Libyan state. It was normal for Hifter to visit Egypt to discuss the latest events in Libya with the Egyptian president and listen to the Egyptian point of view.”

In an April 5 statement issued by the Egyptian Foreign Ministry, Egypt called on all parties in Libya to exercise restraint and stop escalation. It also reiterated its support for the UN efforts and stressed the need for a political solution, being the only option to preserve Libya. At the same time, it called for continuing the fight against terrorism and eradicating it from all Libyan territory.

There are media reports that claim Hifter has been enjoying Egyptian support ever since he confronted Islamist armed groups in the wake of Operation Karama in May 2014, which was aimed at cleansing the city of Benghazi, the second-largest city in Libya, from extremist groups that had unprecedentedly gained influence in the eastern part of Libya.

In an interview with the French magazine JeuneAfrique on Feb. 9, 2018, Hifter talked about his relationship with Sisi. “Our positions are getting closer, indeed. I do not see the Egyptian president as an example, but the situation of his country when he came to power is comparable to that of Libya today. Our great enemies, the Muslim Brotherhood, threaten both our countries and their African and European neighbors. Terrorism has spread across Libya,” he said.

A news analysis published on Sept. 20, 2018, by Afrigatenews said that the Egyptian role in Libya stems from several motives. These include securing the common border, which extends over 1,200 kilometers (746 miles), confronting the movements of terrorist groups between the two countries and preserving Egypt's regional role.

Youssef Ahmad said, “The Egyptian position on the Libyan crisis is a strategic position that is consistent with the Egyptian policy toward the conflicts taking place in the region. Egypt seeks to defend the entities of the Arab nations against any challenge. In Libya’s case, it is supporting the national army in its bid to reunite Libya, especially considering that the GNA is forging alliances with unofficial militias that are not subject to the will or control of the state.”

Also, according to Youssef Ahmad, Egypt is anxious about its border with Libya, and it fears the infiltration of terrorists into Egypt. “Anything that happens in Libya will certainly affect Egypt's national security, hence the Egyptian interest in what is going on there,” he said.

Abdel Sattar Hatitah, a writer specializing in Libyan affairs at the London-based Asharq Al-Awsat newspaper, told Al-Monitor over the phone, “Egypt is a source of confidence for Hifter. This is why he visited Egypt to discuss the steps that need to be taken in his country.”

He added, “Egypt’s support for the Libyan army is an important position, and I think that the Europeans are intrigued by this support because it is a serious and declared stance against terrorism. In conjunction with Hifter’s visit, Sisi received a call from German Chancellor Angela Merkel to discuss developments in Tripoli."

An April 15 statement issued by the Egyptian presidency said that Sisi received a call from Merkel, who “was keen to listen to the president's vision regarding the latest developments on the Libyan arena in light of Egypt's active role in the region and given that Sisi currently chairs the African Union.”

Sisi and Merkel agreed to intensify international efforts in a bid to find a swift solution to the Libyan crisis and stop the situation from deteriorating.

In the wake of the armed clashes, the World Health Organization in Libya announced on Twitter April 18 that 213 people had been killed in more than two weeks since clashes broke out in and around Tripoli.

Egypt supports all efforts aimed at restructuring the Libyan military establishment. On Feb. 20, 2018, the Egyptian Committee on Libya discussed with the Libyan army delegation the military establishment restructuring mechanisms as well as ways of upgrading the professional military performance. This would protect the country's border and preserve its unity so that the army serves as a key guarantor of the civilian character of the Libyan state.

Hatitah concluded, “By supporting the Libyan army, Egypt is not seeking to protect the Libyans but to protect its border and the security of its people because terrorism in Libya travels across neighboring countries such as Egypt.”