The Red Sea governorate will ban the single use of plastic products starting in June, in a bid to reduce pollution that is threatening its biodiversity, which is the main touristic attraction of the area. 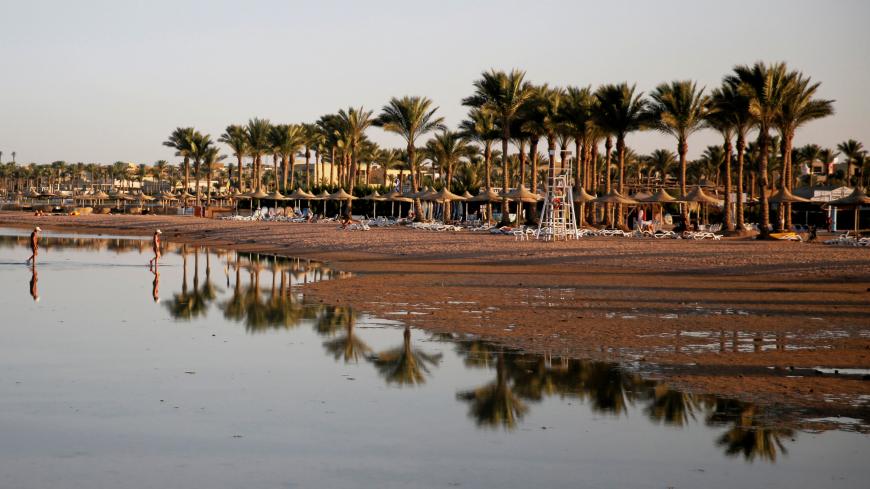 Tourists are seen on a beach in Aqaba Gulf in the Red Sea resort of Sharm el-Sheikh, Egypt, July 12, 2018. - REUTERS/Amr Abdallah Dalsh

Egypt’s Red Sea governorate will be the first governorate in the country to ban single-use plastics starting June. The ban comes as part of a decision April 1 by Red Sea Gov. Ahmed Abdullah seeking to protect marine life, particularly endangered species that are exposed to plastics.

The governor explained in a press statement that the ban of single-use plastic bags will apply to pharmacies, grocery and seafood stores, restaurants, fruit and vegetable shops, butchers and supermarkets. Plastic products such as knives, forks, plates, straws and cups used on bus tours and boat trips will also be banned.

The Red Sea governorate is located between the Nile and the Red Sea in the southeast with a coastline of 1,080 kilometers (671 miles). It is one of Egypt's main tourist destinations and known for its water sports, scuba diving and sailing facilities.

TripAdvisor placed the governorate's capital Hurghada on its list of 25 cities around the world to visit in 2019, referring to the city as a prime destination for diving and snorkeling because of its stunning coral reef and turquoise-colored waters.

In order to implement the ban on plastics in June, Red Sea officials have been working closely with the Hurghada Environmental Protection and Conservation Association (HEPCA) — a nongovernmental organization founded in 1992 to protect and preserve the natural resources of the Egyptian Red Sea environment — to organize awareness campaigns about the hazards of single-use plastics on public health and provide shops and restaurants with an alternative.

Heba Shawky, deputy managing director of HEPCA, said that the decision does not only benefit marine life, but human lives, too.

“People should realize that single-use plastics are harmful to marine life and their own health as well. Unfortunately food shops use plastic containers for hot foods such as soups, causing a threat to people's health including cancer,” she told Al-Monitor.

According to Shawky, during cleanup campaigns carried out by HEPCA, in cooperation with local diving centers, it became clear that plastic bags cover the coral reef leading to its destruction. She said that plastics also threaten dolphins, migratory birds and sea turtles.

“Single-use plastic bags look remarkably like jellyfish when floating in the sea. When turtles, for instance, see [a plastic bag], they unfortunately eat it, thus filling their stomachs and sadly causing death,” Shawky added.

She noted that one of the campaign’s activities is to organize lectures and events in schools, markets and governmental institutions in order to talk about the alternatives to single-use plastic products such as biodegradable and recycled bags.

“We are distributing these bags in different sizes for free to Red Sea residents. They can be used for two years or so. The public’s feedback has been very positive as they have started using them [the recyclable bags] even before June,” she said.

Various governorate agencies — such as the supply, environment and health administrations — will be in charge of following up on the ban. After the ban enters into force in June, if a restaurant or a grocery store, for instance, is found using single-use plastic products, it will be given a week's notice to use alternative products. If it fails to do so, the facility will be closed.

Egyptians use roughly 12 billion nondegradable plastic bags each year, at a total cost of 2 billion Egyptian pounds (roughly $115 million), Mohamed Shehab Abdel Wahab, then-CEO of the Egyptian Environmental Affairs Agency, said in June 2018. Once these bags are used, they end up in the streets, the Nile, the Mediterranean Sea and the Red Sea.

Many efforts have been made to restrict the production of single-use plastic bags in the country. In June 2017, a European Union-funded initiative was launched by the Ministry of Environment, in cooperation with the public and private sectors, to reduce the plastic bag consumption. The initiative also aimed to encourage manufacturers to produce disposable and paper bags. During this initiative that lasted about 18 months, roughly 4.5 million tons of biodegradable plastic bags were distributed mainly in Cairo.

In 2018, dozens of young people in Hurghada organized a campaign to clean up beaches on Magawish island, a nature reserve located near the city's coastline and known for its coral reef. The campaign succeeded in cleaning the plastic and solid waste.

Globally, plastic pollution has become a notorious environmental issue, which is posing a major threat to coastal biodiversity. According to a report published by the UK Government Office for Science in 2018, around 70% of marine litter is nondegradable plastic and is expected to increase threefold between 2015 and 2025.

In March, the European Parliament overwhelmingly approved a ban on some single-use plastics in all EU member states by 2021. More than 80% of marine litter on European beaches are made up of plastic.