The project, which will be showcased at COP27, is establishing around 100 coral nurseries near Hurghada. The newly grown coral will then be planted in parts of the reef damaged by human activities and climate change. 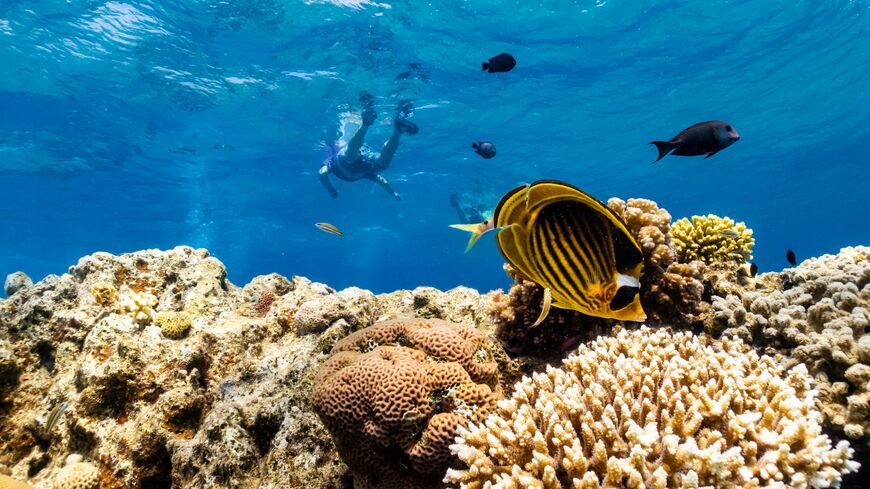 Swimmers, snorkelers and beachgoers enjoy a swim at the Coral Beach Nature Reserve on July 16, 2022, in Eilat, Israel. The corals in this Red Sea gulf might be one of the last remaining complete ecosystems by 2100. However, there is a possibility that this surviving coral reef could be used as a blueprint for an entirely new climate-resistant ecosystem. - Lukasz Larsson Warzecha/Getty Images

As part of preparation for the UN climate change conference (COP27), Egypt’s Ministry of Environment announced on Sep. 4 a pioneer project to restore coral reefs in the Red Sea that have been damaged by human activity.

The pilot project, a collaboration between the Environmental Affairs Agency, the Academy of Scientific Research and Technology and the company Gabrtek, is establishing dozens of coral nurseries off the coast of Hurghada. Coral nurseries are structures, in this case made of organic materials, that facilitate rapid growth of small coral fragments in order to later replant them in damaged reef areas.

“I realized a long time ago that there is a problem with coral reefs [in Egypt]. I can see that it’s degrading everywhere I go,” Ahmed Gabr, a former Egyptian Army officer with a long experience in diving and the person in charge of the pilot project, told Al-Monitor. “It’s very important to focus on curing and taking care of these coral reefs.”

The Red Sea hosts one of the longest continuous living reefs in the world, stretching some 4,000 km along its coastline and harboring an estimated 350 different coral species. About 15% are unique to the region, the third largest such proportion in the world. And in Egypt, where coral reefs extend into the gulfs of Suez and Aqaba, they represent an important source of food and livelihood.

Like most reefs around the world, the coral reefs of the Red Sea have been degraded for years by a combination of natural and human factors. Some of their greatest threats include pollution, urban developments along the coast, and pressure from fishing activities. But in Egypt, the greatest impact is often attributed to Red Sea tourism.

“The marine ecosystem and the corals are considered the most valuable heritage of Egypt,” Abd El Rahman El Mekkawi, professor at Sinai University and founder of the I-Dive Tribe NGO for marine life conservation and protection, told Al-Monitor. “Unfortunately, this unique varied marine life is in constant danger. Professional divers may break a half to one centimeter of corals per dive, let alone unprofessional divers, whereas the centimeter of coral may need about 30 to 70 years to grow,” he noted.

Another major threat to coral reefs around the world is climate change, particularly the rapid warming of the oceans. It is estimated that 70 to 90 percent of the world’s reefs will be severely degraded by mid-century for this reason. But Egypt stands somehow apart, as its coral reefs, particularly in the Gulf of Aqaba, are proving to be much more resilient and tolerant to rising sea temperatures.

“All the scientific evidence shows that our coral is more tolerant to climate change. This means that the coral reef of Egypt is not just of national or regional importance, but also global. If it can be one of [the last] refuges of coral reef in the world, then it’s very important,” Mahmoud Hanafy, marine biologist, professor from Suez Canal University, and a member of the Hurghada Environmental Protection and Conservation Association (HEPCA), told Al-Monitor. “We have to protect this reef by all means.”

Coral is formed by colonies of very small animals called polyps which reproduce both sexually and asexually. But their propagation is a very slow process and, in the middle of a reef, they tend to be very vulnerable. A coral nursery eliminates most of these hazards.

In Egypt, Gabr explains that organic materials serve as substrate for the coral to grow. His team takes fragments of coral that is already broken and cut them into pieces of between half a centimeter and a centimeter. They then glue them to the substrate and put them in the coral nursery.

Gabr said the project started three months ago, and that they have already established 20 coral nurseries near Abu Monkar Island in Hurghada. Their goal is to have 100 within a year. So far, they have managed to get coral from four of the nurseries to start propagating with a 40-75% success rate. Before rehabilitating any reefs, they first have to monitor the process over the course of a year. “Some of them already grew, and some started calcifying on the substrate, started to have roots and grow,” Gabr said. “We are enhancing our techniques  and figuring things out."

The Egyptian ministry of Environment stated in its press release that the project is part of its plans to address environmental challenges in partnership with other government agencies, the private sector and civil society. The ministry also detailed that in this case it will provide scientific, technical and logistical support to Gabrtek. Gabr said that volunteers will be involved in the project as well.

The project will be presented during COP27, to be held in Sharm El Sheikh in November, as a pioneering experience to adapt to the effects of climate change. The ministry anticipates that it will produce a study on the best practices and methods for the rehabilitation of coral reefs in the Red Sea, as well as reports on the biological diversity of the area.

However, HEPCA, one of Egypt’s most prestigious environmental organizations, has been very skeptical. Although they recognize the need to restore coral reefs, they consider that the coral fragmentation and transplantation method applied in this case may be counterproductive. This method, Hanafy said, records high mortality of healthy corals, and the resulting coral is less resilient than that propagated by sexual reproduction.

“We need restoration of coral reefs in some areas, such as off of Hurghada. But the conflict here is [how to do it],” Hanafy said. “Colonies coming from sexual reproduction would have more resistance than coral coming from fragmentation and transplantation, so this should be the approach.”