The shores of the Red Sea in Egypt have long been attractive to Russian tourists because of their rare coral reefs. 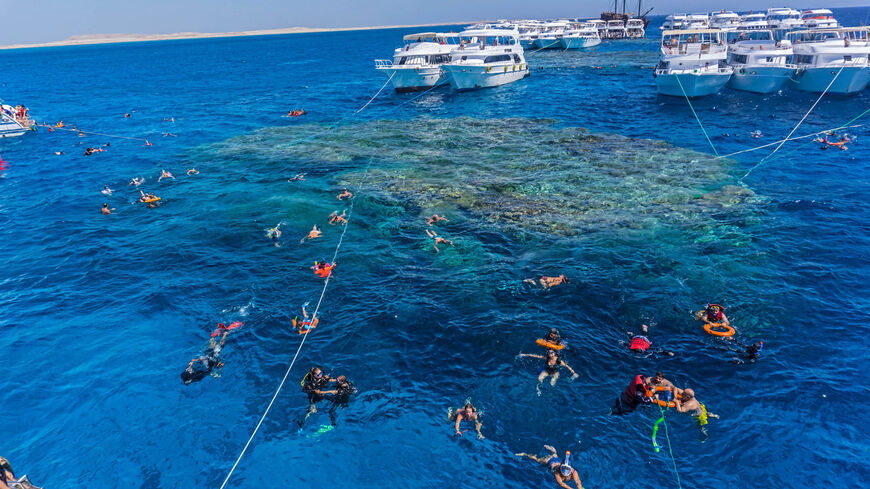 Local and foreign tourists snorkel in the Red Sea waters above a coral reef near Sharm el-Sheikh, at the southern tip of the Sinai Peninsula, Egypt, Sept. 29, 2021. - Khaled Desouki/AFP via Getty Images

CAIRO — Despite the losses of Egypt's tourism sector due to the Russian invasion of Ukraine, environmental experts see this as a blessing in disguise. They have long warned of the damage commercial tourism is doing to Red Sea coral reefs.

The coral in this region are famous for their ability to adapt to the rising temperatures in the sea. According to the United Nations Development Program (UNDP), the Red Sea hosts about 350 different coral species and is “one of the most sensitive biodiversity hubs remaining globally.”

Activities such as snorkeling and diving next to the coral reef spots have been attracting millions of tourists, mainly from Russia, over the years. However, these practices threaten the corals' ecosystem and expose the reefs to the risk of bleaching and eventually disappearing.

Mohamed Ali, owner of a diving center in Hurghada, located on the Red Sea coast, told Al-Monitor over the phone that the reefs are in good condition, “but of course, they are not what they used to be." He said, "When the number of customers [tourists] increases, consequently, a number of the corals die, and we find the coral reefs get harmed."

The tourism sector in Egypt has been severely affected by the war in Ukraine, as the number of bookings from Russia and Ukraine decreased last month by 30%. The Egyptian government estimated before the crisis in Ukraine to receive between 300,000 and 400,000 Russian tourists per month.

Ali said that since the beginning of the war the number of Russian tourists visiting the area has reduced by 70%, noting that the most significant portion of his customers are Russians who dive with his team to see the coral reefs. He added, “I used to take two or three boats a day, and each boat carried between 70 and 80 tourists. Now only one boat sails, with about 15 tourists on board from Poland, Serbia, England and Germany.”

Russian Ambassador to Egypt Georgy Borisenko told Sputnik agency that the number of Russian tourists who arrived in Egypt in 2021 amounted to about 700,000, most of them headed to the shores of the Red Sea. Meanwhile, about 125,000 tourists visited the Egyptian coastal cities during the first two weeks of this year.

Egypt was one of the most popular destinations for Russian travelers before the crash of a Russian airliner in the Sinai Peninsula in October 2015. According to Borisenko, about 3.3 million Russians vacationed in Red Sea resorts in 2014.

Last year, the UNDP launched the Marine Conservation Campaign with local authorities to protect the Red Sea’s coast and reduce human pressures on its ecosystem.

The UN body said, “Although tourists, beachgoers, and watersport enthusiasts continue to enjoy this beautiful coastline, some remain oblivious to their detrimental contribution to waste generation, littering, unsustainable diving, and snorkeling practices, as well as the feeding and collection of marine species. Human pressures placed on the ecosystem are often the basis of coral diseases that affect coral populations and reef-associated species.”

The Intergovernmental Panel on Climate Change, in a recent report, said that Egypt will lose about 74% of its coral reefs by 2100 as a result of climate change and human activities on the shores of the Red Sea.

For Ali and the divers who work with him in Hurghada, coral reefs are “our source of livelihood,” and to preserve them, they often warn tourists in the area not to touch the reefs or throw anything on them.

In a phone call with Al-Monitor, Maryam Elsadeq, environmental communications officer at the Hurghada Environmental Protection and Conservation Association (HEPCA), said that they work around the clock to reduce the pressure on coral villages. “A team of divers from the association are installing every day buoys for boat owners to put their anchors in because every time a boat’s anchors are put into the reef, it destroys about a cubic meter of it,” she said.

HEPCA was created in 1992 as a community-based initiative and proposed a permanent mooring buoy system to reduce reef damage. In addition, the mission of the association includes promoting ecotourism among locals and tourists, filing lawsuits against those who drop litter on the coral reefs and providing awareness campaigns for hotels along the Red Sea coast.

Mahmoud Hanafi, professor of the marine environment at Suez Canal University and adviser to HEPCA, told Al-Monitor that there is overuse of reef villages. “Diving rates exceed 200,000 dives per year for one diving site, while the sustainable rate should be between 5,000 dives and 22,000 dives, and exceeding this rate might harm the coral,” he explained.

He pointed out that commercial tourism is more suitable for the northern resorts on the Mediterranean than the Red Sea. “It is now time to promote ecotourism on Egypt's eastern coast because the pressure on coral reefs in Hurghada has become very high,” he added.

For this reason, HEPCA is now working on a project with the Red Sea governorate that aims to build “artificial coral reefs” for tourists to reduce pressure on the real ones. However, Hanafi did not provide information on when the construction of these artificial reefs would begin.

But for now, with fewer tourists, there is a chance — even if for just several months — that the reefs can breathe without external pressure.