Palestinian foragers are resisting an Israeli law that bans the picking of aqub, a delicacy whose harvest has long sustained local women. 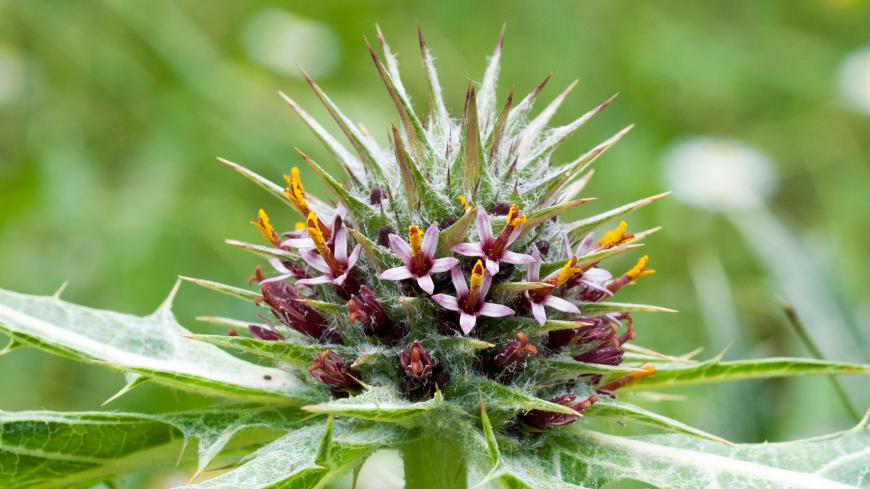 As the spring rains taper off and wildflowers coat the hills, Jamila gets up well before dawn. Quietly, furtively, carrying pails, burly jute sacks and scythe-like knives, she and a few friends climb into a rented minivan and the driver takes them out to the fields surrounding Arrabe, her village in the central Galilee.

By sunrise, Jamila, 66, is scrambling across the hills and climbing down into the deep wadis foraging for aqub, a small, artichoke-like local delicacy. Deftly, she cuts the head off from the thorny purplish stem. By mid-morning on a good day, she will have picked as much as 10 kilograms (22 pounds). Back at home, neighbors will come to her door paying as much as 50 shekels ($14) a kilo if she has invested the intense work necessary to strip off the thorns and clean them and 15 shekels a kilo ($4) if she sells it as is.

Aqub tastes somewhat like a cross between kohlrabi and asparagus, a taste that is clearly enhanced by identity and tradition. The plant has been foraged and eaten in this region since ancient times. Today, Palestinians serve it fried, with lemon juice and tahini, or in stews. According to local lore, it has all sorts of nutritional value, from increased immunity against disease to heightened sexual prowess. Arrabe, Jamila’s village, is particularly known for the high quality of the aqub that grows nearby. Arrabe is also known for having the largest percentage of medical doctors and other professionals of any Arab village in Israel. Locals quip that it's “because they eat so much from a very young age.”

According to Israeli law, however, aqub (known as gundelia in English and scientifically as gundelia tournefortii) is a protected plant and picking it is a criminal offense, punishable by fines and up to three years’ imprisonment. Inspectors from the National Nature and Parks Authority have already caught and fined Jamila several times this season, which is why, she explains, she does not want to give her full name.

While in previous decades, some entrepreneurs had taken to picking commercial amounts of aqub to sell to markets and restaurants, Margareta Walzak, a plant ecologist in the Nature and Parks Authority, tells Al-Monitor the fines and the intense labor involved in aqub harvesting appear to have put a stop to it. Most aqub foraging is done by individuals in small amounts, for family or local use.

Despite the fines — totaling several hundred shekels, much more than she makes from the aqub over an entire season — Jamila, a widow, says she will continue to forage. She says that she doesn’t know where she will find the money to pay the fines but adds defiantly, “Aqub is not only my livelihood — it’s my tradition and who I am.”

Rabea Eghbariah, an attorney for Adalah, the Legal Center for Arab Minority Rights in Israel, tells Al-Monitor that the ban on foraging is an affront to Palestinian identity and nationhood. Using the Arab term for the 1948 Israeli War of Independence, he says, “After the Naqba, when some 700,000 Arabs were expelled or fled from their homes, plants like aqub took on a special significance and became a sign of connection between the land and the nation. It is impossible to understand the injustice of this ban without understanding the cultural context, and the significance that zaatar — the Biblical plant hyssop — and aqub have had and continue to have in shaping Palestinian culture and identity."

In January 2019, Adalah appealed to Israel’s Minister of the Environment and the attorney general to lift the ban on picking aqub. Since it has not received a response, Eghbariah says that the organization is preparing to petition Israel’s High Court of Justice. Meanwhile, foragers like Jamila face high fines, no matter how much or how little they actually pick and whether it is for personal or large-scale commercial use. According to information provided by Adalah, over the past few years, some 70 individuals have been charged and their cases are still pending. More than 750 people have been fined.

Despite the ban, aqub isn’t listed on the parks authority’s list of threatened plants, popularly known as the red list.

Nor, Eghbariah contends, has any persuasive, reliable and scientific data ever been presented to show that aqub is indeed in danger of extinction. He also criticizes the blanket enforcement policy. “Maybe there is a negative effect on the plant, and so a study should be made that takes both ecology and culture into account. Instead, the state imposes criminal procedures on individuals and companies alike.”

Walzak says that initial surveys, made years ago, did show a drop in the number of aqub seedlings. However, she acknowledges that while it can be assumed that commercial foraging could lead to aqub’s extinction, there is no reason to assume that foraging small amounts should have any negative effect; nor, she continues, has there been any monitoring of the plant to show whether the current policy is effective.

Furthermore, Walzak says, enforcement and punishment should be selective. “We should not be placing heaving fines on people who forage small amounts. The inspectors claim that the men who pick commercial amounts send out the women as decoys. I admit, there is a certain tension within our offices between the information and science divisions and the inspectors. We are reviewing our policies and by next season I hope that we will have a more selective and proportionate policy.”

Al-Monitor was unable to obtain any response from the parks authority regarding the role of the inspectors.

A respectful and respected tradition

Throughout the centuries, foraging for aqub and other seasonal plants has largely been a women’s activity. Says Jamila, “Not all families forage aqub; it is a tradition handed down within families from generation to generation. Women go out to the fields together, getting exercise in the healthy air. We come close to our land. And we gossip and laugh a lot, too,” she adds.

This kind of work has also provided a means for women to maintain some social and even economic independence. Jamila relates that when her husband died, she was left with seven children; her oldest 15 and her youngest three. “We were a poor family, but we made do,” she recalls. “But when my husband died, I suddenly had to provide for my children and myself. I have no education; I have always been at home — what could I do? I knew that I could make a living off the land, like my mother and grandmother had done before me.”

Jamila has structured her life around the offerings in the fields that surround her. In the spring, she forages for aqub. A few months later, she picks, toasts and sells freekeh (green wheat). In the summer, when wild wheat is dry, she harvests it sets up a stall along the road to sell labneh, a form of cheese, and a thin, traditional phyllo-like bread that she makes for the Ramadan holiday. Later in the season, she grinds the wheat into bulgur. In the fall, she picks olives in the fields and cures them.

“Each season has gifts that it gives to us to live,” she tells Al-Monitor.

The claim that foraging aqub will lead to its extinction makes her angry. “My people have foraged aqub for centuries and it never became extinct. We know how to protect the plant. We do not pull out the roots and we leave aqub in the fields so that it will send out its seeds so there will always be more.

“And if the authorities really cared about aqub,” she continues, incensed, “they wouldn’t wait until we climb back up to the road to take our harvest. They have binoculars, they see us — they could stop us before we pick anytyhing. Instead, those inspectors are making fun of us, letting us work, then taking what we have collected.”

Eghbariah says that the Israeli authorities have created a narrative according to which “aqub is the victim and the Palestinians are the abusers."

"This is unjust,” he adds, explaining that the ban on foraging is based on what he refers to as “the Zionist ethos, which is deeply rooted in a belief that Israel will extract the best from the land, unlike the ‘ignorant natives’ who do not develop the natural environment and only harm it. This is a colonialist approach.”

He notes that in Lebanon, where aqub is also very popular, regulations that criminalize the foraging of protected plants also permit the picking of small amounts for domestic use.

“I am not a botany expert and I don’t know the exact balance between culture and control that is necessary to maintain the population of the plant,” he concludes. “But I do know that the current version of the law is unjustifiably harmful and an insult to Palestinian culture and nationhood.”