The tribe that the Houthis once bet on in their battles is the one fighting them now in Hajour district. 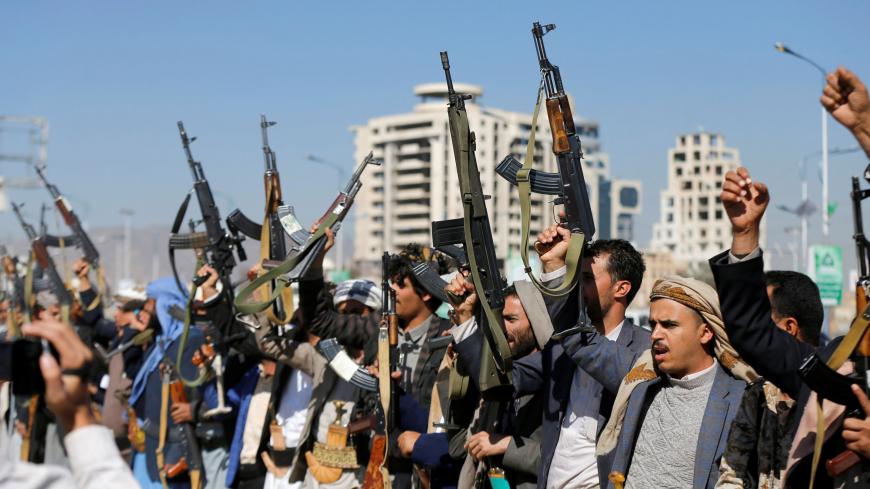 Houthi followers raise their rifles as they attend a gathering to show support for the Houthi movement in Sanaa, Yemen, Dec. 19, 2018. - REUTERS/Khaled Abdullah

With the support of the Saudi-led Arab coalition in Yemen and the legitimate government, the Hajour tribes are battling the Houthis in the northern province of Hajjah near the Saudi border.

On March 4, the coalition carried out its sixth landing, dropping weapons, ammunition, food and medical supplies in support of the Hajour tribes in Hajjah province. The coalition has been launching airstrikes against the Houthis in this battle while Yemen's legitimate government army troops are advancing on the ground. The battles between the Houthis and the Hajour tribes are taking place within the Fifth Military Region’s geographical scope. On March 1, the legitimate government decided to provide the Fifth Military Region with reinforcements from other military areas to support the Hajour tribes.

The Houthis, also known as Ansar Allah, have taken over, since they invaded the capital Sanaa in September 2014, most Yemeni provinces in record time. However, they have so far been unable to wrest control of Hajour in the Keshar district of Hajjah province. Hajour falls within a Zaidi area and the Houthis are Zaidis.

Hostilities flared up between the Houthis and the Hajour tribes after the tribes captured Houthi fighters in the tribal territory. The incident escalated in early February into an ongoing fierce battle.

The battle of Hajour may extend to the Huth triangle south of Saada province and cut off the main road linking it with Sanaa. The Houthis would almost be completely trapped in Saada, their stronghold. The distance between Hajour and the city of Houth that links Sanaa to Saada is only 50 kilometers (31 miles). This prompted the Houthis to mobilize their ground forces, heavy weapons and Katyusha rockets artillery in this battle.

Fahed al-Sharafy, adviser to the information minister in the legitimate government, told Al-Monitor, “The Houthis are attacking the Hajour tribes since these tribes took a patriotic position rejecting the Iranian project and refusing the return of the Yemeni Imamate rule.” He compared the Houthis to the Imamate regime against whom the Yemenis revolted on Sept. 26, 1962.

Stressing the importance of the Hajour battle, Sharafy pointed to the complex topography of the region and its connection to the neighboring tribal areas, describing the battle as the internal revolution of the tribes of the north. “With more support from the legitimate government and the Saudi-led Arab coalition, the Hajour tribes can clear more than 10 mountainous districts in Hajjah province of the Houthis,” he added. “The Hajour tribes will be backed by the tribes of Hached and Bakil in Amran province. Tribal uprisings would reach Saada, Sanaa and Dhamar at such high tempo that the Houthis would not be able to keep up.”

According to Sharafy, the Hajour tribes are so far winning this round. “The battle will not be the joyride that the Houthis have imagined. The Houthis’ future is at stake, especially if the legitimate government and the Arab coalition rush to offer full support to the Hajour tribes.”

A security source told Al-Monitor that the Islah party has been and continues to provide its supporters in Hajour with money and weapons, especially in the past few months.

A military source told Al-Monitor on condition of anonymity, “Arms were and are still being delivered to Hajour from the Fifth Military Region in [the city of] Midi controlled by the legitimate government.”

A Saudi local source told Al-Monitor, “The Salafist and Wahhabi seminaries are mobilizing money for a campaign under the slogan ‘Support Hajour.’”

Ahmed Jarib, a member of the Houthis' political bureau, told Al-Monitor, “The Saudi-led coalition’s failure to achieve any military progress on the various fronts in Yemen pushed it to ignite the battles in Hajour.”

He pointed out that Riyadh tried to exploit the situation of Hajour, from where hundreds of Salafists hail. “The war [the Houthis are fighting] is not against the tribes of Hajour, but rather against a rebel faction loyal to the Saudi [coalition] in Yemen. The coalition is trying to portray what is happening in Hajour as a fight between a nation on one side and a community on the other,” he said.

Jarib added, “The battle of Hajour is crucial given that this area is located in the center between the provinces of Hajjah, Saada and Amran.”

Meanwhile, a tribal source told Al-Monitor on condition of anonymity that “the Houthis are seeking to hold a long truce in Hajour.”

The source noted, however, that the Hajour tribes completely reject the idea of a truce. “They believe a truce would be a period of downtime for the Houthis who would exploit it to launch their attack. The Houthis have opened a second front on the borders of Aflah Ash Shawm district south of Hajour to besiege and pressure Hajour.”

Ahmed Karhash, a military expert and former commander of the northwestern region where Hajour is located, told Al-Monitor, “Battles erupted mainly because the Houthis fear the Hajour tribes would align with the legitimate government forces coming from Midi in northwestern Yemen.”

He said that the battle will militarily undermine the Houthis’ control on Hodeidah, noting, “The Hajour tribes are a serious and strong resistance force deep inside the control areas of the Houthis."

Karhash added, “It is still early to talk about the gains and losses of the two parties. But a preliminary reading of the results indicates that the Houthis are losing morally since their reputation has been tarnished among the tribes. The result of the battle highly depends on the potentials and capacities of the Hajour fighters. The forces of the legitimate government and the Arab coalition are backing these fighters with supplies and airstrikes. But their assistance, however, remains limited.”

He continued, “If the resistance in Hajour withstands, Qaflat Othor district in the province of Amran will be next in line to revolt since it is tribally and historically predisposed to do so. If this happens, the ensuing repercussions would adversely strategically affect the Houthis.”

So far the odds are in favor of the Houthis. However, the battle in Hajour will be a long-drawn-out war of attrition since the battleground is overly sensitive to tribalism. This battle will undermine the Houthis’ influence in general and will continue to be a future threat to them. The tribes that the Houthis once bet on for support in their battles could now turn against them.