After 10 years of war, are Yemenis hopeless?

The war in Yemen has added a new group of internally displaced persons to that previously created during a decade of conflict between Houthis and the state. 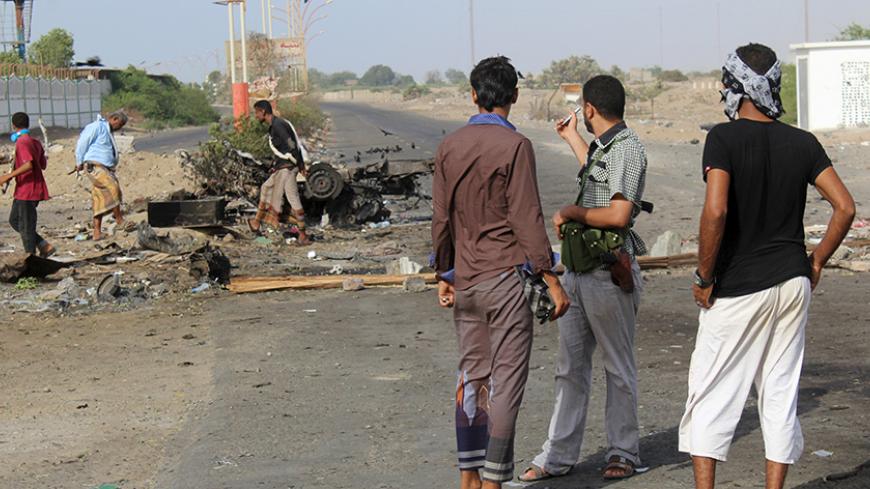 People look at the site of a suicide bombing in Yemen's southern port city of Aden, March 26, 2016. - REUTERS/Fawaz Salman

SANAA, Yemen — Adam Radman Hadaj, a Yemeni man in his mid-30s, decided to flee the violence of war in Saada province, in northern Yemen, in the hope that Hajjah province, on the border with Saudi Arabia, would be a safe haven for him and his 25-member family. Hajjah province is as far from the war as he could afford to migrate. Hadaj, a dark-skinned man with the frail body common among refugees, spoke about his situation as a displaced person.

Having lived at a relatives’ home for the past 11 months, Hadaj told Al-Monitor, “I did not expect life to be so harsh. I've encountered numerous difficulties in my life, but never have I had such a hard time. We do not have enough food. We are surrounded by disease and threatened by war. Each time I leave the house, I feel I will not be coming back.”

The situation of other internally displaced persons (IDPs) in Yemen is no different. Being displaced in a poor country ravaged by war, in this case between the Houthis and the government, is the definition of real suffering.

“More than 2 million internal refugees were displaced from their areas, fleeing the violence,” Adnan Hizam, media officer for the Red Cross in Yemen, told Al-Monitor. “There are invisible displacement destinations as numerous people seek refuge with their relatives in quiet areas, while others, who are affluent, rent houses.” In past months, Sanaa, Ibb, Amran, Hajjah, Marib and Hodeida provinces have provided sanctuary for the hundreds of thousands of displaced persons from areas in the central and northern parts of the country.

According to the World Health Organization (WHO), many of the refugees are living in unhealthy living conditions. In shelter schools, for example, some of which host hundreds of IDPs, only two bathrooms are available, one for each gender. Ahmed Chadol, a doctor and WHO representative in Yemen, told the UN News Center, “The health situation in the shelters that host internally displaced people is disturbing.”

In Hajjah province, Abdullah Idris directs the Baddah medical dispensary, which is supposed to provide medical services to the displaced. He told Al-Monitor, “There are nearly 12,000 displaced people seeking medical services, but I cannot give them anything. We have nothing at the dispensary.”

The dispensary is situated between the towns of Abes and Mastaba in an obsolete, single-story government building. It has two rooms packed with patients, a room allocated for medical exams and a dusty storeroom with a couple of boxes of medical solutions. Crowds of people flock to the facility in search of services.

A female volunteer who is also displaced from the province of Saada, the Houthis' stronghold, is in charge of exams for women. She works with two male physicians, including Idris, who spoke for nearly half an hour about the dire situation at the dispensary and the distress the workers feel from being unable to help patients. Ali Mohammed, deputy director of the dispensary, told Al-Monitor, “We received over the past three months hundreds of cases of dengue fever and malaria, as well as cases of acute diarrhea, usually caused by the lack of access to potable water.”

Yemen's deteriorating health system is exposing internally displaced persons to health risks that are a threat to their survival. In Aden, Abyan, Hodeidah, Amran and Sanaa provinces, the living conditions in shelters are exacerbating an already bad situation, especially for people suffering from such chronic diseases as diabetes, asthma, high blood pressure and ailing kidneys.

Benyan Jamal, a human rights activist, told Al-Monitor, “Yemen does not have a story like the drowning of the Syrian boy Aylan, whose photo from the Turkish beach shook the humanitarian conscience, to focus the world’s attention on the human suffering and agony in another Middle Eastern country ravaged by war. The Yemenis’ displacement options are limited, so drawing the world’s attention to their misery is difficult.”

Jamal noted that most of the IDPs are poor and do not have passports, or enough money, to leave the country. Their options for escaping violence are very limited.

On the road between al-Marzak camp and the town of Mastaba, in Hajjah province, dozens of IDPs walk under the blazing sun. They do not seem concerned about the hazards of being in a border region witnessing clashes between government-allied Saudi forces and the Houthis, who are backed by military forces loyal to former President Ali Abdullah Saleh. Zakaria al-Mouayad, 50, a refugee in the town of Mastaba wearing a torn garment that covered only half his body, told Al-Monitor, “Life no longer has value for us. Nothing here encourages us to take heed.”

Al-Marzak hosts thousands of Yemenis displaced by the conflict between the Houthis and the state that has plagued the country for a decade. The camp also includes hundreds of newly displaced persons fleeing the Saudi airstrikes supporting the Saudi-led military intervention, Operation Decisive Storm, launched March 26, 2015, to back President Abed Rabbo Mansour Hadi, Yemen's internationally recognized leader.

In October 2015, with the school year about to begin, dozens of families — some having registered in IDP camps while others fled to relatives without being registered — were moved to special camps. They had originally fled the neighboring provinces of Taiz and Dalea for shelter schools in Ibb province.

Hajjah officials built al-Salam Camp, a small camp not built to last. “The camp contains 72 brick rooms and accommodates 423 displaced people comprising 80 families, but we lack numerous capacities,” Said Malhi, deputy director of al-Salam, told Al-Monitor. “We need medicines, blankets and food. NGOs have given us nothing, except for UNICEF, which provided some aid.”

For the hundreds of thousands of Yemenis who have fled their homes to escape the violence of war, their situation seems bleaker with each passing day. They all wonder if they will ever return home.