From Saturday Mothers whose sons went missing in the 1990s to homeless children whose parents have been killed, Kurdish films provide a grim reflection on the situation on the ground in Turkey. 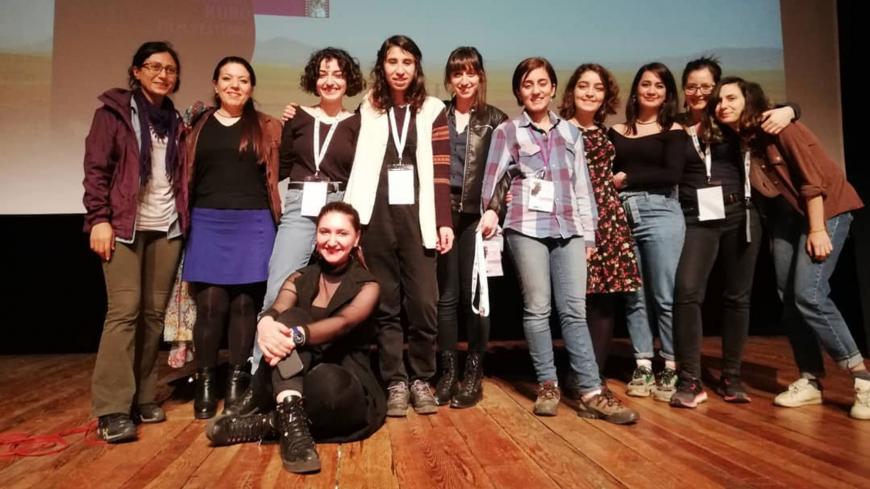 Some of the organizers of Istanbul's Kurdish Film Festival, Istanbul, Turkey, seen in a picture uploaded March 10, 2019. - Facebook/mezopotamyasinema

On the evening of March 8, International Women's Day, thousands of women convened on Istanbul's Istiklal Avenue. Several hours prior in a makeshift theater housed in an unassuming apartment building just a few minutes away, eight films by female directors were shown to a packed room.

The screenings took place on the third day of Istanbul's first Kurdish Film Festival, celebrating Kurdish female film directors on this annual women's day. And unlike the march on Istiklal Avenue that evening, which was roughly dispersed by police using tear gas against the demonstrators, the festival went off without a hitch.

Kurdish films and their directors, however, have faced censorship and no small amount of pressure from the authorities in recent years. The festival's opening film "Bir" ("The Well") is a harrowing documentary by director Veysi Altay about the Saturday Mothers, a group of mostly Kurdish women who began assembling in Istanbul's Galatasaray Square in 1995 to demand answers to the whereabouts of their sons, who had disappeared and most likely were killed during the 1990s. The film traces the efforts of the women and their families to find the bodies of their sons, some of whom were as young as 13 when they went missing. In February, Altay was sentenced to 2½ years in prison on charges of terrorism propaganda concerning the film "Nu Jin" ("The New Woman").

“The idea [for the festival] was born about two years ago and we were just now able to do it, due to the political atmosphere and the intense pressure and censorship directed toward cinema and art,” said co-coordinator Adar Tas of the Mesopotamia Cinema Collective. Tas said that she and her colleagues hope to benefit from holding the festival just weeks prior to Turkey's upcoming local elections, on March 31, and that it would be tolerated or ignored by the authorities as a result.

Kurdish film festivals are organized in cities in the primarily Kurdish east and southeast of the country, including Diyarbakir, Van and Mardin, and the German capital of Berlin hosted its 8th Kurdish film festival last year. Doing so in Istanbul, however, has proven much more difficult.

In 2009, "Min Dit" ("Before Your Eyes") became the first Kurdish-language film to be screened at Turkey's prestigious International Antalya Film Festival. The film follows two siblings who are in the car with their parents when they are shot dead by JİTEM (Gendarmerie Intelligence Organization) operatives. The children end up on the streets of Diyarbakir, eking out a living with other homeless children, eventually coming face to face with their parents' killer.

But the political climate in 2009 was much different from the situation today, and it is unlikely that such a politically charged film would be shown at a major festival in 2019. A March 4 screening of "Gunese Yolculuk" ("Journey to the Sun"), a 1999 film by Yesim Ustaoglu — perhaps Turkey's most celebrated female director — was canceled at Istanbul's Marmara University, a public school. The film follows the tragic stories of two young, working-class men — the Turkish Mehmet and the Kurdish Berzan — in Istanbul during a particularly volatile period.

Though set in the 1990s, films like "Min Dit" and "Gunese Yolculuk" seem ever relevant in light of the 2015 collapse of the peace process between the banned militant Kurdistan Workers Party and the Turkish state, which resulted in intense conflict in several southeastern cities, including the historic Sur district of Diyarbakir, a large section of which was razed to the ground.

“The reason that we held the festival here was so that no one could interfere with the selection of films and in order to be more comfortable among ourselves. We didn't search out another cinema because we knew that [the festival] would not be accepted,” Tas said of why the films were screened at the Mesopotamia Cinema Collective's small theater.

Regarding the March 8 screening, Tas noted that they wanted to set a day to share the efforts of female filmmakers with the public, given the mostly male-dominated nature of the film industry.

One of the films screened was "Tebesir" ("Chalk"), a short documentary by Ozge Astan, a math teacher who was one of thousands of educators fired from their jobs by decree during the extended state of the emergency period that followed the failed coup of July 15, 2016. The film shows Astan continuing to teach lessons out of an apartment as well as her demonstrating with colleagues on the main square of Istanbul's Bakirkoy district, demanding their jobs back.

Eight short films and documentaries directed by women were screened during the day, while the final showing in the evening was "Reseba" ("The Dark Wind"), a film by Iraqi Kurdish director Hussein Hassan about the Islamic State's genocidal attack on the Yazidis in 2014.

Though the small festival may have indeed benefitted from the pre-election atmosphere, it is a significant first and its existence reflects the bold, resolute efforts of Turkey's Kurdish filmmakers to address the politically sensitive issues of language, assimilation, violence and displacement through cinema.