Faced with an anemic economy and fears of terrorism, the 38th annual international film festival in Cairo lacked star power and international appeal. 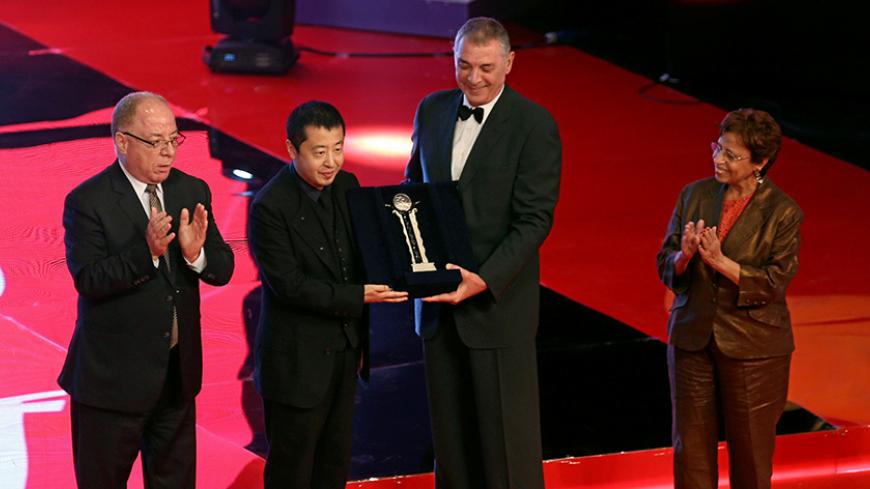 It was perhaps not the best time for Cairo to host its annual international film festival. Grappling with multiple challenges, including a struggling economy, terrorism in Sinai and a standoff with journalists, the Egyptian government has its plate full.

But the authorities in Cairo had hoped the 38th Cairo International Film Festival (CIFF) would attract a large number of foreign visitors at a time when tourism, the lifeblood of the Egyptian economy, has been hard hit by terror fears. In his address at the opening ceremony, Minister of Tourism Mohamed Rashed expressed his support for the festival, which he said “bears witness to the fact that Egypt is stable and safe and ... capable of hosting such grand international events.”

The authorities had also hoped the festival would serve as a distraction for Egyptians, offering them some respite from their anxiety over the high prices of basic commodities and looming harsh austerity measures. That is one reason why organizers decided to extend the event beyond the confines of the Cairo Opera House (the traditional venue) to theaters in downtown Cairo for the first time in five years, making the films accessible to a wider audience.

The festival, however, fell short of the state’s overly ambitious expectations. There were no Hollywood celebrities flashing big smiles on the Cairo red carpet this year. And for most Egyptians, even the modestly priced 20 Egyptian-pound ticket (less than $2) for each show was a luxury they could not afford during this time of economic crisis.

Nevertheless, organizers worked hard to ensure that the festival lived up to its reputation as the only (and oldest) international competitive feature film festival recognized in the Arab world and Africa by the Paris-based International Federation of Film Producers Association. Over 200 films from 60 countries were screened during this year’s CIFF (held from November 15-24), giving Egyptians — whose only exposure to foreign films are the commercial Hollywood productions screened at local theaters throughout the year — a rare opportunity to gain insight into the customs and cultures of other countries. China was the guest of honor this year, bringing no fewer than 15 Chinese feature films to the festival. Two of them were classics, while the rest were contemporary films made between 2001 and 2016, including several box office successes in Asia.

In a bid to avoid the kind of criticism directed at the festival in previous years, tickets were made available online and festivalgoers were kept informed about the films’ schedules, seminars and workshops via the CIFF website. Special packages for certain film categories were offered, allowing film enthusiasts to see several movies at discounted prices — “an added incentive to encourage more youth to attend,” said Magda Wassef, the festival chairperson. Meanwhile, a CIFF partnership with Twitter allowed celebrities attending the festival to engage directly with their fans, sharing key moments from the event via the social media network.

The death of iconic Egyptian actor Mahmoud Abdel Aziz just three days before the festival’s opening, however, cast a pall over the event, and many local celebrities were missing from the opening night extravaganza.

This year’s CIFF paid special tribute to the late Egyptian-British film director Mohamed Khan, who passed away last July. Hailing from Egyptian cinema’s 1980s generation of “neorealism” film directors, Khan’s films are a direct documentation of daily life in Egypt. Seven of his films were shown at the CIFF, including his 2014 melodrama, “Factory Girl,” which earned the film’s lead actress, Yasmin El Raies, a Best Actress Award at the Malmo Arab Film Festival in Sweden the year it was released. Shedding light on the hardships endured by Egypt’s working class, the film tells the story of a young textile factory worker named Hayam, who becomes infatuated with the factory’s new foreman. Believing that love can transcend the class differences between them, Hayam has a rude awakening when a pregnancy test is discovered on the factory premises and she is falsely accused by co-workers of committing adultery. She decides not to defend herself, breaking free from social norms but also breaking her own heart in the process.

The festival paid special tribute to Khan's work, which has inspired a new generation of young “apprentices” such as filmmakers like Hala Khalil, described by The Hollywood Reporter as “one of the bright new voices in Egyptian cinema.”

Khalil’s 2015 film, "Nawara" — chronicling the aftermath of the 2011 uprising on a young woman who works as a housemaid for Egypt’s elite — was featured among eight films in the CIFF’s New Egyptian Cinema category. Also featured was director Mohamed Diab’s “Clash,” a harrowing drama set entirely in a police van during the 2013 clashes between Egypt’s pro-military supporters and the Muslim Brotherhood that took place after the overthrow of Islamist President Mohammed Morsi.

Two Egyptian films competed with 14 foreign films in the official competition: "The Other Land," directed by Ali Idrees, and Kamla Abu Zekri’s “Women's Day,” which premiered as the opening film, earning rising star Nahed El Sebai the CIFF Best Actress Award. The latter film explores the immense social and psychological pressures faced by Egyptian women in the conservative, male-dominated society. Meanwhile, "The Other Land," which tackles the thorny issue of migration, has been chastised by critics for “propagating the state narrative.” Describing the film plot as “insensitive and reductive,” Mada Masr cultural editor Rowan El Shimi wrote that the film "reduced the horrendous obstacles most migrants have to face to mere promotional trinkets.”

The CIFF itself has been shrouded in controversy since the announcement of the festival’s lineup in a press conference in late October. The organizers’ decision to exclude Egyptian director Tamer El Said’s award-winning feature film, “In the Last Days of the City,” from the festival prompted free speech advocates to accuse the organizers of practicing covert censorship, a charge denied by CIFF’s artistic director, Youssef Cherif Rizkallah. Rizkallah insists that the decision was prompted by Said’s violation of an agreement on conditions for the film’s participation.

Shot in 2009 and assembled at great length over the next several years, "In the Last Days of the City" presents the first overt stirrings of turmoil — including labor strikes by factory workers — that would in January 2011 explode into a full-scale uprising against the authoritarian regime in Cairo.

Ironic perhaps that a film portraying media censorship and state propaganda would itself get censored. But as internationally renowned actor Khalid Abdalla — who stars in the film — told The Guardian in early November, “Scenes we captured so innocently pre-revolution have resonance in the [current] counter-revolution situation. Everyone jokingly says that things have gone back to the way they were [before the revolution] and the film embraces [that].”

Indeed, the CIFF’s exclusion of the film is testament to the fact that so little has changed in Egypt.