The Turkish Ministry of Culture is facing strong protests from the film industry over its censorship of Kurdish themes. 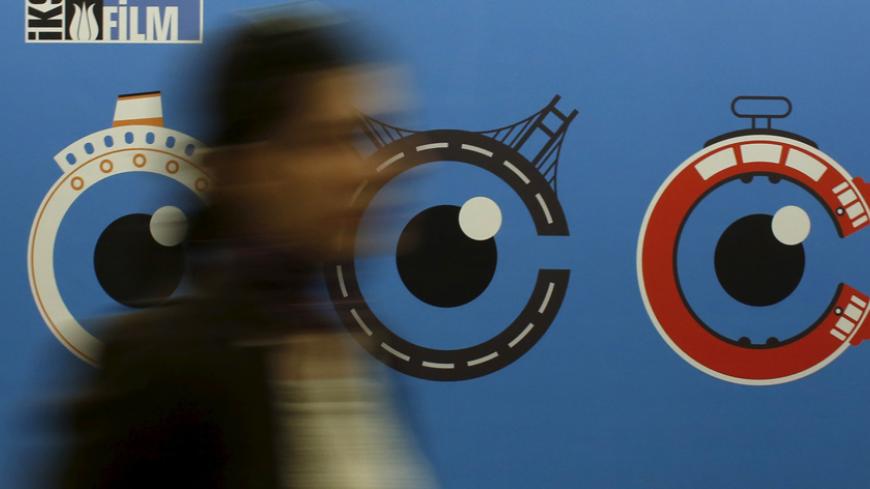 A woman walks past a banner of the Istanbul Film Festival at Atlas movie theater in Istanbul, April 14, 2015. - REUTERS/Murad Sezer

On April 12, the Istanbul Foundation for Culture and Arts announced that "A Guerrilla Documentary: Bakur (North)" would not be screened at the prestigious Istanbul Film Festival. The reason cited for the cancelation of the screening: a missing registration document.

Director of the Istanbul Film Festival, Azize Tan, voiced her disappointment about the cancelation decision during a televised interview. “We [as artists] failed to stand up against censorship in time. We struggled to get by the elusive rules and meander through the red tape. Now the audience and the producers of art are paying the price again.”

Film producers explained that the cost of the registration document is not the only factor making it difficult to obtain one. For instance, many filmmakers just finalized their movies before the festival, and many other films screened during the festival have not been finalized. A director may decide to share 180 minutes of the uncut version of his movie with the festival audience, but when the film is released to the box office, it may appear as a shorter, edited version. Once the movie is given a registration document, it cannot be altered according to Turkish laws.

This documentation is only required for locally produced movies. For instance, if "Bakur" were the work of a foreign producer, the film would not be required to obtain this documentation. This policy is seen as grounds for discrimination against the domestic movie industry. Many producers believe that even if the registration process was waived, the government would have found another technical excuse for its arbitrary intervention.

The trailer for Bakur (Courtesy of Ertugrul Mavioglu)

Other festival competitors did not take the cancellation of the screening lightly. Indeed, 23 movie producers announced their solidarity with the filmmakers and canceled the screenings of their films. The festival's board called off the closing ceremonies as well. In addition, over 100 film producers, including the famous director Nuri Bilge Ceylan, latest winner of the Cannes Palme d’Or, signed a declaration protesting state censorship.

However, all sides involved — tacitly or openly — agreed that the registration document is a mere pretext to prevent the screening of the movie. Tan pointed the finger at the Ministry of Culture. Cem Erkul, head of the ministry's cinema office, said that after reading sensational interviews with the film's directors in the daily Radikal, he called the festival organizers and said that the subject matter of the movie — which he said he had not watched — was unacceptable.

Similarly, Minister of Culture Omer Celik shared his views on Twitter, which immediately appeared in the headlines of Turkish newspapers. Celik wrote, “Terror is terror, it is the enemy of all democratic value and freedom. Those who fail to comply with the legal requirements [referring to the registration document] are now crying 'censorship' in a deceitful manner.” He added, “It is impossible to explain the kind of support given to terrorism in such professional organizations.”

The bureaucracy of the Justice and Development Party (AKP) was particularly concerned that the documentary was causing an uproar on social media. Even the prominent satire magazine Penguen picked up the scandal and placed President Recep Tayyip Erdogan on its cover. In the cartoon, Erdogan is told that all movies have been withdrawn from the festival and that a meteor is about to hit earth, to which he replies, “I must immediately inform my people about the benefits of the presidential system.” After all these heated statements, one cannot help but wonder what this documentary is all about.

The 92-minute documentary opens with the historic call of Abdullah Ocalan, leader of the Kurdistan Workers Party (PKK), during the March 2013 Nowruz celebration. It continues to document the daily lives of guerrilla fighters belonging to the PKK and the People’s Defense Forces (HPG), which is the PKK’s armed wing. It is a crucial production providing candid insights into the mindsets of these fighters. The film was shot during the summer and autumn of 2013 at three different PKK camps, primarily focusing on the guerrillas' reactions to Ocalan’s announcement of the withdrawal of PKK forces to Iraqi Kurdistan. The documentary also skillfully captures the evolution of the organization into a women’s liberation movement.

Directors Cayan Demirel and Ertugrul Mavioglu are experienced filmmakers and well respected in Turkey. Demirel suffered a heart attack and was released from the intensive care unit April 15. Mavioglu told Al-Monitor, “We are no strangers to censorship. Seven years ago, Demirel had produced 'Dersim 38,' a documentary that detailed the massacre of thousands of Alevi Kurds in eastern Turkey. It is banned and [the case is] still in the courts. We did not spend months in the mountains, seeking permission from fighters so that we could keep the documentary shelved at home. Of course we will find a way to get it out to the audiences in Turkey and the world. We are dismayed to see that the Ministry of Culture labeled our work as 'terror organization propaganda' prior to watching the documentary."

Mavioglu continued, “During the 1980s military regime, we experienced strict censorship on multiple levels. Their rules and regulations guided the succeeding administrations. In the last decade, we can summarize the AKP’s approach to arts with longtime Ankara Mayor Melik Gokcek’s words regarding a statue: 'I spit in the face of art like this.' There are so many examples: With the excuse of preventing alcohol sales, music festivals are banned. Not only movies are censored, even TV channels that dare show these movies are facing hefty fines. The AKP differs from the previous administrations by the effort it puts into co-opting some artists. While all artists who have signaled even the slightest support for the Gezi Park protests have been ostracized and penalized, others have been rewarded financially by the AKP administration.”

Director and actor Aydin Orak told Al-Monitor that there is no limit to censorship and bans in Turkey. “Before and while you are directing a movie in Turkey, you are constantly required to question if you are abiding by the core values of the Turkish Constitution.” As if this was not a sufficient curse for filmmakers, Orak added, “There was a time when speaking in Kurdish was fined — 5 liras for each word. Indeed, even whistling in Kurdish could get you in trouble.” In his movie, "Asasiz Musa" ("Musa Without a Walking Stick"), which details the life of Kurdish writer and dissident Musa Anter, Orak depicts this scene. "Bakur" might share the share the same fate with Orak’s banned 2011 documentary "Berivan." Following attempts to find legal means to screen his documentary, Orak finally posted it on YouTube.

Given the vast, instant reach of mobile devices, why would the AKP insist on movie censorship? It deters aspiring and financially struggling artists from any sort of dissent, and just as in other forms of art, censorship sets a precedence. The message is clear: If you want to reach an audience, you better produce the acceptable kind of Kurdish movies. The government doesn't ban all Kurdish movies, in fact, it's to the contrary. Just as the AKP allows Kurdish politicians to join its ranks, Turkey's Ministry of Culture supports certain famous Kurdish movie producers. As long as you do not whistle in Kurdish, or tamper with the AKP’s rules, Kurdish-ness is not a taboo.