The continuing deterioration of Turkey's economy and the fact that the pro-Kurdish Peoples’ Democratic Party (HDP) has refrained from entering candidates in local elections in the country's west, where the HDP is supporting other opposition parties, could result in the ruling party’s loss of some larger cities, which could lead to early general elections. 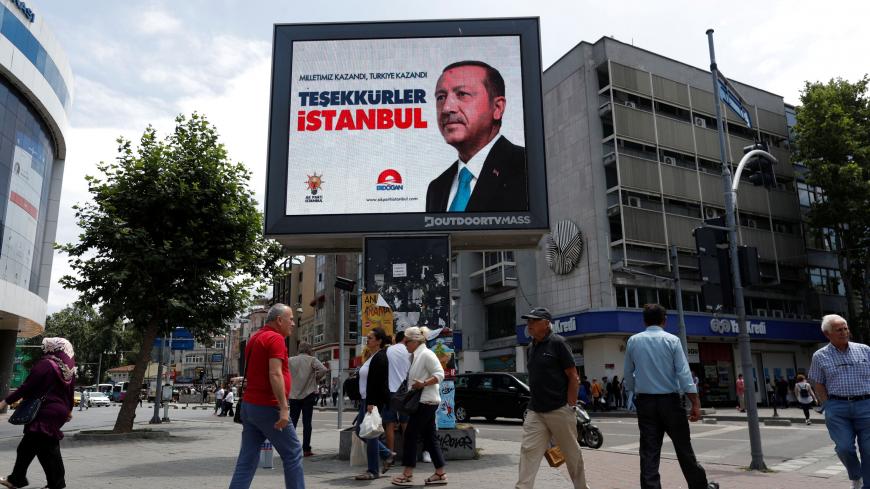 On March 31, Turkey will elect mayors for 81 provincial capitals and 957 towns. Under normal conditions in Turkey, local elections are considered to be of interest mostly to local people and do not have much effect on national political balances.

But this time, there is a different scenario for the local elections, one that is often expressed by narratives of President Recep Tayyip Erdogan. If you listen to the president's remarks and messages without realizing that the subject is local elections, you could get the impression that the country is heading to unprecedented vital elections, is about to engage in war or is going to undergo a change of regime.

In this election, the struggle is between coalitions — Erdogan’s Justice and Development Party (AKP) and the allied nationalist National Action Party (MHP) that have formed the People’s Alliance, and the opposition parties led by the main opposition Republican People’s Party (CHP), which have put together the Nation Alliance.

Simply by reading Erdogan’s personal Twitter message of Feb. 27 accusing the Nation Alliance of sympathizing with terror outfits one can see that these elections will have significance far beyond a routine local election. Erdogan’s polarizing narratives and policies is not a new phenomenon for Turkey. But his resorting to such offensive language against an opposition alliance that represents half of society has attracted much curiosity, particularly as he did not resort to such terminology in earlier general elections.

For Erdogan these local elections have excessive importance; this was clear from the day AKP announced its candidate for mayor of Istanbul, showing how high the party's bar is. The AKP’s candidate for Istanbul is the former parliamentary speaker, former prime minister and Erdogan’s right-hand man, Binali Yildirim. Erdogan is thus fielding his most significant associate for the Istanbul post.

Both Erdogan and his alliance partner Devlet Bahceli say the local elections are a ‘matter of survival’ for Turkey. This is terminology the Turkish nationalist right wing has been using to warn of Turkey being under threat. But it is also the first time that this is being used for local elections.

All these narratives indicate that the president is worried about possible outcome of the elections and is trying divert the voters’ attention. Only in the first two months of this year food prices in Turkey rose by 13.21%.

According to a poll by the Social Democracy Foundation, when asked what they can’t buy anymore, 51% of respondents said "red meat" and 23% said clothing.

Of course the ruling party is aware of these polls and as a response it has set up official sales points where products are bought directly from producers and sold to consumers at lower prices. Now thousands of people wait in line in all corners of the country to buy basics such as potatoes and onions a bit cheaper.

Erdogan’s portrayal of the coming elections as a "matter of survival" therefore could be interpreted as an effort to distract disgruntled voters’ attention to the country's polarization and security problems.

There have been other developments that indicate that Erdogan actions are not just a political tactic but that he is actually concerned with the outcome of the elections.

It is well known from the days when Erdogan was a candidate for mayor of Beyoglu district in Istanbul and later served as the Istanbul metropolitan mayor, prime minister and president that he has been a politician who has used polls extensively. When he recently said he doesn’t trust the polls, he attracted attention to what these polls were saying.

In Istanbul, Yildirim leads but opposition candidate Ekrem Imamoglu has been closing the gap every day. In nearly every poll for the Ankara mayor's race, Mansur Yavas, the opposition candidate, leads the government’s candidate, Mehmet Ozhaseki, by four to 10 points. These polls also suggest the possibility that the AKP could lose major cities such as Bursa and Adana.

For the ruling party, another disturbing development is in southeastern provinces where Kurds are in the majority and where the pro-Kurdish People’s Democracy Party (HDP) could easily sweep the mayoral posts. Previously, about 100 mayors elected in the region were removed from their posts by the government on charges of abetting terror and were replaced by trustees appointed by the government. Erdogan says that should people involved with terror be elected again, they would be removed and replaced by trustees.

The HDP did not name candidates in major cities such as Istanbul, Ankara and Izmir. The ruling party is worried about the HDP’s strategy of “make the government lose in the west but we will win in the east.”

In Ankara and Izmir, where the HDP has a 10% voting potential, the party will support the opposition. Most HDP voters are expected to heed this call and vote for other opposition candidates.

Erdogan’s march to power began with his election as Istanbul’s mayor in 1994. The same year, Melih Gokcek, a member of Erdogan's party, was elected as mayor of Ankara. For Erdogan, who has won all his elections with big margins, the municipal elections could be his Achilles heel. The loss of some big cities, a general loss of votes for the AKP, and new victories for the HDP in elections in provinces with large Kurdish populations could mean early general elections.

Recently, Amberin Zaman reported in an Al-Monitor article that former close associates of Erdogan were looking into setting up a new party. Establishment of this new party by politicians said to include former Prime Minister Ahmet Davutoglu and former Economy Minister Ali Babacan would depend on AKP’s vote count in the coming election. Should the AKP suffer a serious loss of votes, then it wouldn't be a surprise to see some of Erdogan’s former associates go their own way and set up their party.

Looking at all these developments, the March 31 elections could be a “matter of survival” not for Turkey but for Erdogan. Is this likely? We may see how Erdogan will react April 1.