Turkey’s ruling Justice and Development Party appears to have lost control of city hall in Ankara and may lose Istanbul as well, where unofficial results put the opposition slightly ahead. 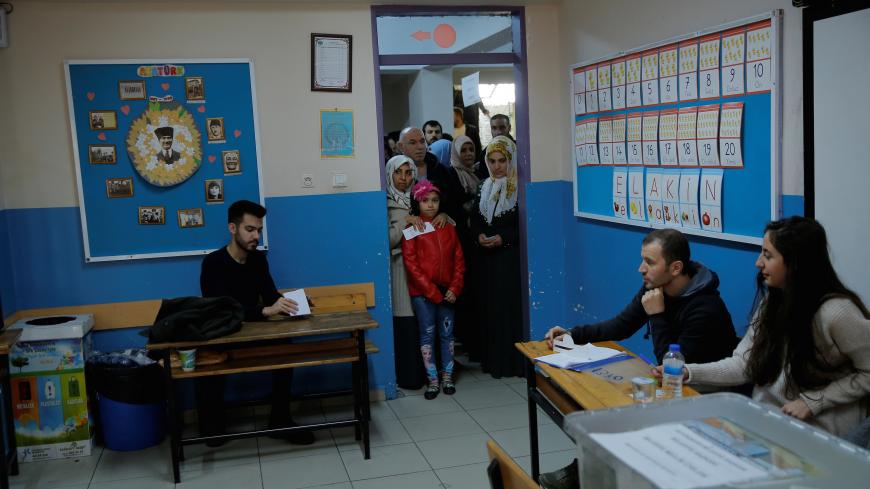 Turks line up to vote at a polling station during the municipal elections in Istanbul, Turkey, March 31, 2019. - REUTERS/Huseyin Aldemir

Turkey’s ruling Justice and Development Party (AKP) appears to have lost control of city hall in Ankara and is neck and neck with the opposition in Istanbul, according to preliminary results from Sunday's municipal elections. In the capital, Mansur Yavas, candidate of an alliance led by the main opposition Republican People’s Party (CHP), has taken the lead. Meanwhile in Istanbul, Turkey's largest city and its commercial hub, opposition candidate Ekrem Imamoglu reportedly leads former Prime Minister Binali Yildirim, according to the latest data provided by Turkey’s official Supreme Election Board.

Why it matters: These elections are the first since President Recep Tayyip Erdogan assumed sweeping executive powers last year. As such, they are widely seen as a vote of confidence in his single-handed rule. The results have no direct bearing on the central government, but are widely viewed as a rebuke to the government, especially over a bruising economic downturn marked by soaring prices and an unemployment rate heading to its highest level in three decades.

The nationwide turnout was below 83%, down from 87.5% in the June 24 elections, Turkey’s state-run Anadolu news agency reported. The decline is believed to have been triggered mainly by disgruntled AKP supporters shunning the polls.

Symbolic meaning of Istanbul: The fall of Istanbul in particular would be a watershed event for the AKP. Erdogan’s ascent to the helm of power began in Istanbul in 1994, when he was elected mayor of the city. Beyond its symbolic significance, the loss of Istanbul — a metropolis of more than 15 million people and Turkey’s industrial and commercial hub — would deprive the AKP of abundant economic resources, which have been instrumental in currying favor with voters and expanding the party’s base.

Today’s outcome is also a snub of Erdogan’s polarizing stance and unprecedented attacks on the opposition as part of a narrative that framed the local polls as a “matter of survival” for the nation against foreign conspirators and their collaborators within. Erdogan even accused the CHP of cooperating with “terrorists,” equating the pro-Kurdish Peoples’ Democratic Party (HDP) with the outlawed Kurdistan Workers Party (PKK). The HDP supported CHP-led alliances in major cities, including Ankara and Istanbul.

Election surprises: One of today’s many surprising outcomes came from Turkey’s mainly Kurdish southeastern region, where the HDP lost several of its former strongholds, including Bingol, Bitlis and Sirnak.

“Some of these are conservative cities [where] there is already a general inclination toward the AKP’s conservatism,” Irfan Aktan, a prominent journalist who has covered Kurdish politics for more than a decade, told Al-Monitor. However, in Diyarbakir, the largest city in the mainly Kurdish southeast, the pro-Kurdish party scored a significant victory.

What's next: With the elections over, Turkey’s economic crisis stands out as the primary challenge for the government. Free from electoral pressure, Ankara is expected to adopt austerity measures and may seek to reduce tensions with the United States and other Western powers to restore the confidence of foreign investors.

How Erdogan handles the opposition’s wins will be critical in this regard. Should he make good on his threats to oust opposition mayors, he could stir political tensions that could scare away investors and undermine the economy. In any case, opposition mayors face an uneasy coexistence with the government. Erdogan has warned that “those who are not in harmony” with Ankara will “tomorrow declare bankruptcy.”

Know more: Kadri Gursel details the fear-mongering that has characterized the electoral campaign. To see what awaits Turkey's economy after the elections check our economy writer Mustafa Sonmez’s latest piece.