Turkey's ruling party lost big in the municipal elections and the main opposition party took Ankara and Istanbul, which the Justice and Development Party and its Islamist forerunners had controlled for the past 25 years. 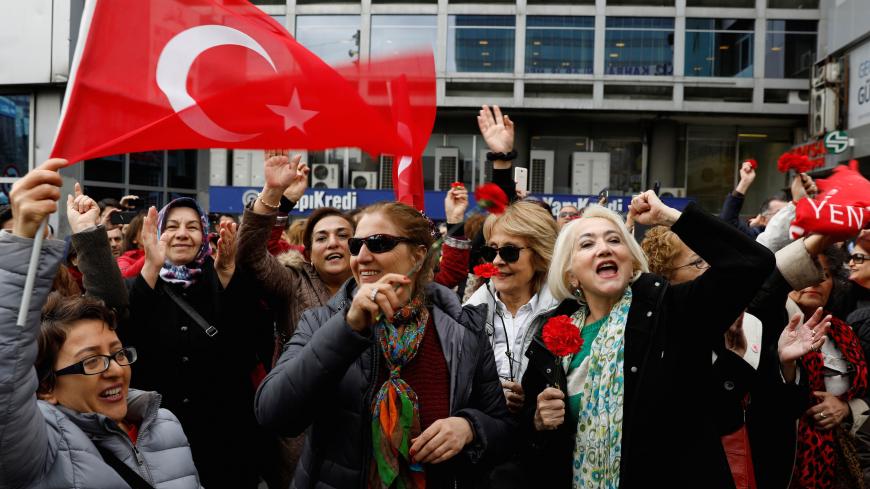 Supporters of the Republican People's Party celebrate in a square in Ankara, Turkey, April 1, 2019. - REUTERS/Umit Bektas

After decades in the doldrums, Turkey’s main opposition scored several major victories against the ruling Justice and Development Party (AKP) in nationwide municipal elections Sunday, snatching the political capital, Ankara, and the commercial capital, Istanbul, from its jaws and injecting renewed faith in what has long seemed a broken political system.

The election results saw the AKP lose several other major cities, including Antalya, a major tourist hub on the mediterranean, and Mersin a major port to the main opposition Republican People’s Party (CHP) along with Bolu and Bilecik in the west, Sinop in the north and Ardahan in the east. The AKP also lost to its electoral ally, the Nationalist Action Party, in seven cities, although their so-called "Public" bloc led the polls with 51.63% of the overall vote.

The reversal — the biggest electoral setback suffered by the AKP since it shot to power in 2002 — comes amid a weakening economy, now formally in recession. The government’s last-ditch efforts to hold on to voters by setting up vegetable stalls at subsidized prices and propping up the sagging the lira that shed nearly 30% of its value in 2018 through unorthodox interventions appear to have failed. The economy had long been the AKP’s strongest suit during its more than 16 years of uninterrupted power.

But several other factors appear to have tipped the scales. The first is Turkish President Recep Tayyip Erdogan’s unabashedly polarizing rhetoric throughout the election campaign labeling his opponents as terrorists and traitors. “Even his own supporters have grown fed up with this divisive language. Some simply refused to vote,” said a party insider with close ties to Binali Yildirim, the AKP’s mayoral candidate for Istanbul. Another is some 50% of Kurdish voters who normally cast their ballots for the leftist People’s Democracy Party (HDP).

In Istanbul, where the AKP lost by a razor-thin margin, “HDP Kurds voted for the CHP en masse,” said Behlul Ozkan, an associate professor of political science at Istanbul’s Marmara University who observed the polls. Kurds are believed to account for as much as 11% of the vote in Istanbul, which is often called the world’s largest Kurdish city. They voted strategically in keeping with instructions from the HDP, which struck an informal alliance with the CHP in provinces outside its strongholds in the country’s mainly Kurdish southeast.

Another factor that played in the CHP’s favor was its decision not to include the small pro-Islamic Saadet or Felicity Party in a three way alliance with the Good (Iyi) Party as it had during parliamentary elections in June last year. Saadet, which had alienated its pious base with its decision to team up with the secularists, managed to bleed votes away from the AKP this time around. “Even though it was a tiny fraction, Saadet contributed to the AKP’s loss,” Ozkan told Al-Monitor.

Nothing will have stung Erdogan as much as losing Istanbul, where he erected his political career after becoming the city’s first Islamist mayor in 1993. He dramatically improved services, regularized the water supply in the teeming metropolis, cleared mountains of rubbish accumulated under years of CHP rule and helped clean up the Golden Horn, which had degenerated into a cesspool of toxic waste and sewage. It took a full 12 hours for the government to grapple with defeat, with the state-run Anadolu news agency freezing reporting on results when it became clear the CHP had pulled ahead in Istanbul. "Erdogan knew he lost," the party insider said. "If he didn't he would have called out his supporters to the streets."

There are some uncanny parallels between Erdogan and the CHP’s victorious candidate, Ekrem Imamoglu. Both men are from the Black Sea, have a corporate background and played professional football in an amateur league. CHP leader Kemal Kilicdaroglu was sharply criticized by secularists for selecting Imamoglu, an observant Muslim. But in hindsight, the combination of piety with Black Sea roots seems a stroke of genius that drew voters from across the ideological spectrum.

And like Erdogan, Imamoglu is a fighter, refusing to concede the election when the AKP's Yildirim claimed victory before all the ballots had been counted and holding one press conference after another through the early morning hours.

It's too early to predict the precise impact of Sunday’s watershed. The writing has been on the wall for the AKP for some time. In June 2015, the AKP lost its parliamentary majority for the first time and was able to regain it only after Erdogan torpedoed his own party’s efforts to form a coalition with the CHP. In April 2017, he won a referendum on substituting the parliamentary system with a superpresidency, but votes against the change prevailed in Ankara and Istanbul, where the AKP and its Islamist forerunners have run the local government for the past 25 years.

Will Erdogan double down on his polarizing authoritarianism and drive Turkey closer to the precipice, or will he revert to the liberalism of his early days in power?

Erdogan’s initial reaction to yesterday’s losses was out of character for his usual combative self. Addressing supporters from the balcony of the AKP’s Ankara headquarters, as he traditionally does after each election, he cast himself as a lonely man let down by his own party, with only his wife Emine at his side. “People who have come with false promises, go ahead,” he said of his rivals. Sounding a rare note of contrition, he added, “We will see how they rule. We will continue on our path, God willing, by drawing from our mistakes in this election.” Erdogan seemed to pin these on his government’s economic performance and vowed to make structural reforms “to insulate a stronger economy against attacks.”

Outside the AKP headquarters, there were few supporters and many long faces. By the time Erdogan arrived, the crowd had grown to a couple thousand, nowhere near the 10,000 that had welcomed the president after previous elections. They cheered him, waved their orange AKP flags and joined him in singing a party song. But the passion, the delerious joy of earlier years, was gone. So too were the scores of cars cruising up and down Eskisehiryolu, horns blaring and young men leaning dangerously out of the windows to wave their flags.

The party insider told Al-Monitor that pressure was building on Erdogan to fire his son-in-law, Berat Albayrak, who is the economy minister. His lack of experience and arrogance, the source said, has made him highly unpopular within the AKP base. Albayrak is widely rumored to be at loggerheads with Erodgan’s son Bilal and Interior Minister Suleyman Soylu.

Erdogan has ruled out any bailout deal with the International Monetary Fund, but a growing number of analysts believe it offers the only salvation for Turkey’s ailing finances.

Ever the pragmatist, he may go to the IMF. Some believe he may even scrap the controversial S-400 deal with Russia, judging that the political and economic fallout from Washington’s threatened sanctions would far outweigh Moscow’s likely wrath. But such speculation may yet prove rose tinted.

Erdogan does not face presidential or parliamentary elections until 2023, which will mark the centennial of the Turkish republic, so he has a relatively free hand. He easily remains the country’s most popular and influential leader since Mustafa Kemal Ataturk and has survived constant adversity, including a bloody coup attempt in 2016 that targeted his life.

Yet, while Erdogan is expected to retain a firm grip over Turkey thanks to the enormous powers he bestowed upon himself, it's unclear whether he can control his own party in equal measure. Istanbul and Ankara, where the CHP won comfortably, are along with other large municipalities huge sources of patronage that help grease the party machine.

Ahmet Davutoglu, a former prime minister who was pushed out by Erdogan in 2015, is already looking to attract disgruntled AKP members to form a new right-wing conservative party. As the main architect of Turkey’s disastrous Syria policy, he is seen as too controversial to succeed. But yesterday’s debacle may force an internal reckoning. And one of the questions that will inevitably come up is whether to pursue the alliance with the nationalists that has come at the expense of Kurdish votes.

Those rooting for continued hawkishness will point to the HDP’s shocking losses to the AKP in its southeastern strongholds of Sirnak, Agri and, to a lesser extent, religiously conservative Bitlis.

HDP officials blame the outcome on the heavy presence of security personnel and the forced displacement of Kurdish civilians during a bloody urban uprising by the outlawed Kurdistan Workers Party (PKK) in 2015 that left much of Sirnak in ruins.

Thousands of HDP members, including former co-chair Selahattin Demirtas, are in jail over their alleged connections to the PKK. Despite such pressure, the HDP won resoundingly in most of the remaining Kurdish-dominated cities and towns, many of whose mayors were unseated and thrown into jail on thinly evidenced terror charges.

In a press conference following confirmation of his victory, Istanbul’s new mayor vowed to remain respectful “of our Kurdish citizens” and urged party supporters shouting Kemalist slogans to “be careful with your words, your attitude and your actions.” Imamoglu said, "Even a single person being slighted or offended will sadden me.” In a thinly veiled jab at Erdogan, he added, “We will strive to heal the wounds that have been opened, and not just those among our Kurdish citizens. Whoever has been wounded during this period, no matter their ethnicity, their faith, we will tend to them, heal them, in a new democratic phase of governance.”

Correction: April 2, 2019. Al-Monitor incorrectly said the ruling AKP lost to its electoral ally, the Nationalist Action Party in four cities, among them Erzurum. It lost seven cities and Erzurum was not among them.