While Turkey's opposition is seeing a rise in the polls, recent elections in Hungary provide an example for those who think a win is guaranteed. 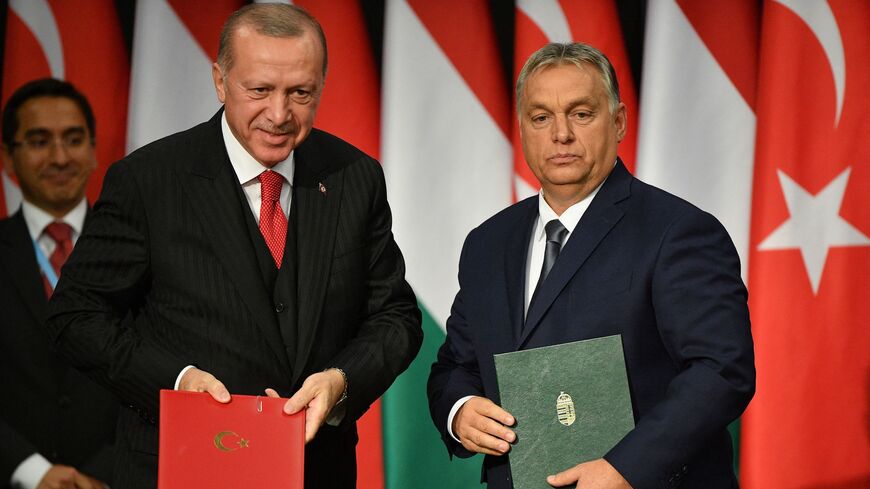 Diplomacy has been termed “the art of deceit,” but few doubt that Turkey’s President Recep Tayyip Erdogan was anything but sincere when he phoned Hungary’s Viktor Orban today to congratulate him on his landslide victory in Sunday’s parliamentary elections.

Both Turkey’s ruling Justice and Development Party (AKP) and the main opposition Republican People’s Party (CHP) have been following developments in Hungary with an eagle eye, seeing their own fates intertwined as it were with those of the respective contenders in Sunday’s ballot.

The similarities between Erdogan and Orban, unabashed populists who have ruthlessly hacked away at judicial and media independence, intimidated their opponents and changed the electoral system to ensure their continued dominance, are well known. The system they have created is called “illiberal democracy” — a term coined by Orban himself that roughly consists of retaining enough of a veneer of competition to claim legitimacy.

Erdogan has been in power for nearly 20 years. Orban, who served as prime minister between 1998 and 2002, returned to power in 2010. Sunday’s outcome clinched his fourth consecutive term since then with 53% of the popular vote. The result unleashed a wave of gloating among AKP supporters and calls from the ruling party’s critics for the opposition to take stock.

This is because six of Hungary’s opposition parties united in a bid to topple Orban, much as the CHP and five other opposition parties are hoping to do in the next parliamentary and presidential elections that are due to be held no later than June 2023.

“It’s a morale booster for the AKP to see Orban beat six opposition parties,” observed Nezih Onur Kuru, a researcher at Istanbul’s Koc University, because the exact number of opposition parties have united against the government in Turkey as well.

In 2019, in Turkey and Hungary alike, they delivered major upsets to the ruling party in municipal elections. In Hungary, the opposition scored in the big cities, including the capital, Budapest. In Turkey, the opposition unseated mayors in Ankara and Istanbul, proving that Erdogan was not invincible after all.

Current opinion polls show the gap narrowing between Erdogan’s coalition with the far-right Nationalist Movement Party and the CHP-led bloc known as the People’s Alliance, much in the same way that polls in Hungary suggested there would be a tight race. The main reason for the AKP’s waning popularity is the unravelling of Turkey’s once robust economy, with inflation now hitting over 60% as the effects of the Ukraine conflict begin to bite.

“Polls cannot be trusted. Undecided voters tend to plump for the incumbents, and any security crisis close to the election time would reinforce that instinct,” Kuru told Al-Monitor. Erdogan’s statesmanlike approach to the war in Ukraine, keeping Turkey neutral as it walks a fine line between Turkey’s NATO commitments and its complex ties with Moscow, has bumped up his ratings according to Metropoll, a respected polling outfit based in Ankara.

Turkey’s opposition is lacking on both counts. For one, the six-party alliance does not include the country’s largest pro-Kurdish party, the Peoples’ Democratic Party (HDP), because the CHP and its right-wing partners are fearful of alienating Turkish nationalist voters. Yet it’s an open secret that without the Kurdish vote, which proved critical in the municipal race, the opposition has little hope of winning at all.

Yet in a roadmap launched last week amid much fanfare, which purportedly outlines how Turkey’s current “one man” presidency will revert back to “strengthened parliamentary rule,” the opposition makes zero reference to the country’s long-festering Kurdish problem. There is no mention of foreign policy, education or even of the Istanbul Convention to protect women, which the AKP pulled Turkey out of, observed Riza Turmenoglu, a respected former judge at the European Court of Human Rights. “Must the sole alternative offered to the people be the old system in new packaging?” he asked in a recent column.

Ekrem Imamoglu, the mayor of Istanbul, and Ankara’s mayor, Mansur Yavas, are seen as the most likely candidates to beat Erdogan. CHP leader Kemal Kilicdaroglu has told them to stay put. Kilicdaroglu is believed to be coveting the candidacy himself, though polls consistently show him trailing behind Erdogan.

Some analysts contend, however, that comparisons between Turkey and Hungary are not all that relevant. Howard Eissenstat, an associate professor of Middle East and North African history at St. Lawrence University and a non-resident scholar at the Middle East Institute, a think tank in Washington, said, “Turkey's economy is much, much worse, which is the key advantage that the opposition has in Turkey over Hungary, where Orban could still take credit for growth and development.”

Eissenstat added, “I think that, in some ways, the economy gives the opposition a better chance in Turkey than it has had in the recent past, despite Erdogan's many structural advantages.”

At the same time, “The level of repression and the nature of polarization in Turkey are also quite different from Hungary and point to ways that the AKP might suppress the opposition or even overturn the electoral process in a pinch,” he told Al-Monitor. “In the end, I just don't think Hungary is a very good compass for Turkey; the differences far outweigh the similarities.”