Turkey’s main pro-Kurdish party played a key role in Erdogan’s defeats in big cities in the local polls, managing to get its voters to back mayoral candidates from the main opposition bloc while sitting out the races. 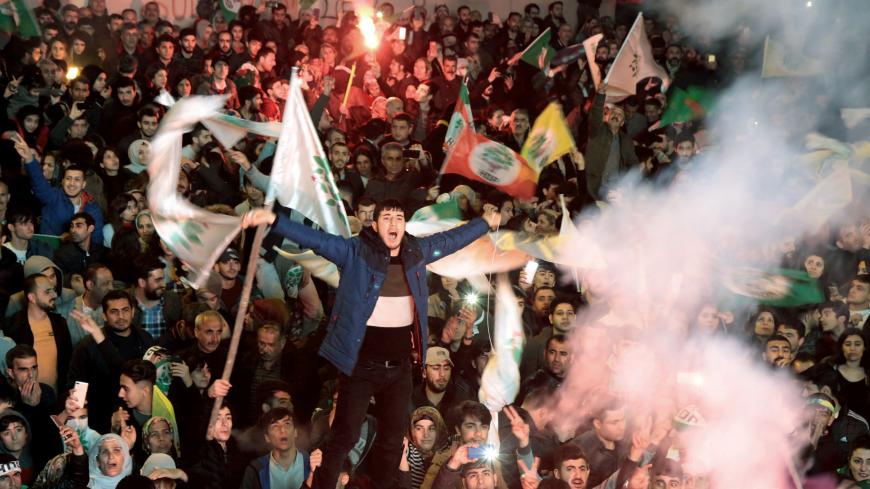 The Peoples’ Democratic Party (HDP) of Turkey — which has a predominantly Kurdish base and has suffered heavy government oppression since 2015 — played a decisive role in the government’s loss of the big cities, including the crucial Istanbul, in the March 31 local elections. As part of its political strategy in the country’s west, the HDP sat out the mayoral races in big cities such as Istanbul, Izmir, Adana and the capital city of Ankara. Paradoxically, the HDP absence from the ballots became the party’s way of proving its political presence and weight.

The HDP’s no-show in big cities aimed to precipitate the defeat of President Recep Tayyip Erdogan’s party, but to achieve this, the HDP had to do another thing: Get its supporters out to the polls to cast strategic votes for the Nation Alliance, comprised of the main opposition Republican People’s Party (CHP) and the right-wing Good Party. The election results show that the party pulled it off.

The number and share of Imamoglu’s votes correspond to the combined totals the CHP, the Good Party and the HDP mustered in Istanbul in the parliamentary elections nine months ago. The three parties collected 46% of the vote — or some 4,340,000 votes out of the total of 9,438,000 valid votes in the June 24 polls. In terms of shares, the CHP had 26% and the Good Party 7.8%. The HDP’s share was 12%, corresponding to some 1,146,000 votes.

Similar to last year’s elections, the Good Party contested the local polls under the umbrella of the Nation Alliance. It forfeited fielding a mayoral candidate in Istanbul to help the CHP, the senior partner of the alliance, win. Therefore, one could easily observe that the only factor that changed the situation for the three parties this time and made Imamoglu win was the HDP sitting out the race and managing to mobilize its voters to back the CHP candidate.

A major driver behind the Kurdish turnout that tipped the balance against the AKP was the HDP’s former co-chair, Selahattin Demirtas, who remains highly influential despite being behind bars for two and a half years now. In a Twitter message sent via visitors March 29, Demirtas appealed to HDP supporters to vote strategically. “You are the direct kingmakers of these elections,” he said. He added, “We have a historic opportunity at hand to show our decisive clout not only in the [southeastern] cities that we shall take back from the trustees but all around the country. The strategic votes we cast in the cities where we have not nominated candidates will demonstrate our strength.”

The trustees Demirtas referred to were another key factor that drove HDP voters to the polls to punish the government. During the state of emergency that followed the 2016 coup attempt, Ankara appointed trustees to 94 local administrations in the country’s east and southeast, removing their Kurdish mayors — elected on the ticket of what was then the Peace and Democracy Party — over alleged links to the Kurdistan Workers Party (PKK), a designated terrorist group. The municipalities of 10 provincial capitals, including three metropolitan ones, were among the seized administrations.

Ninety-three of the ousted mayors, all of whom had headed local administrations in provincial capitals, districts and smaller localities, ended up in jail on the same terror-related charges. As of December, 50 of them remained in prison. The emergency rule saw the arrest also of thousands of HDP members as well as 16 HDP lawmakers, nine of whom are still behind bars.

In sum, a deep sense of victimization spurred HDP voters as they went to the polls in the municipal elections. The HDP won the local administrations in 50 of the 73 provincial capitals and districts that had been handed over to trustees. The others were taken by the AKP, barring Tunceli, where the Communist Party’s Fatih Mehmet Macoglu clinched the victory.

The March 31 polls marked a significant power loss for Erdogan in big cities as a result of the concord among opposition voters, in which the HDP’s political initiative was highly influential. The government failed to escape this critical blow despite its high-pitch campaign rhetoric repeated day after the day by its members and media that the Nation Alliance was hand in hand with the PKK. This was due to two main reasons.

First, the issue of terrorism had fallen to the bottom of Turkey’s agenda in 2018 as a result of a lull in PKK activities since 2017. While the PKK and terrorism dwindled on the public’s problem-perception radar, mounting unemployment and soaring prices — the result of a bruising economic crisis — climbed to the top of concerns, outstripping other issues by far.

With things going upside down like this, the government’s propaganda that the opposition was collaborating with terrorists had little effect. By failing to create a perception of threat, the government failed to convince its disgruntled voters to go to the polls and dissuade right-wing opposition voters from backing CHP candidates. Its narrative that the elections were “a matter of survival” proved a flop.

Second, American presence and objections precluded any Turkish military operation against the PKK-linked People’s Protection Units to the east of the Euphrates River in Syria ahead of the polls. Such an operation might have stirred nationalist sentiment and overshadowed the economic woes while giving credence to the alleged threats to national “survival” and perhaps compensating the government’s loss of support.