Erdogan’s campaign uses brutal images at election rallies of the New Zealand terrorist’s footage and hateful rhetoric, deepening the rift within Turkish society and distancing Turkey further from the West. 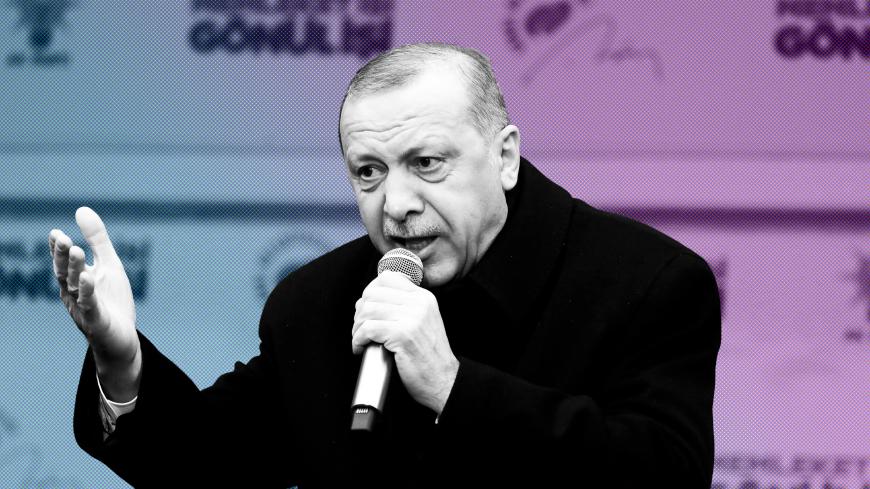 The Christchurch attack in New Zealand that killed 50 people has provided fresh ammunition to Recep Tayyip Erdogan’s campaign trail to lash out at Islamophobia days before the March 31 local elections, which Erdogan portrays as “a matter of survival." But it has also stirred tensions between Turkey and a grieving New Zealand that is trying to handle the situation sensibly.

The attacker — an Australian citizen — livestreamed the attacks with a head-mounted camera. Social media companies have been working diligently to remove the footage of the terrorist attacks. Nevertheless, Turkish President Recep Tayyip Erdogan played the videos over and over during his televised rallies.

New Zealand Foreign Minister Winston Peters said that dissemination of the video could endanger his country and that he had shared his concerns with the Turkish delegation.

At a Gaziantep rally, Erdogan asked the audience if they had watched the live feed of the attack. “This murderer published a manifesto where he targets all Muslims, along with our country and myself. He says we should not cross to the west side of the Bosporus, or he would come and kill us all and remove the minarets of the Hagia Sophia.” Erdogan told the crowd three Turkish citizens were wounded in the attack and that he had spoken to New Zealand Prime Minister Jacinda Ardern.

Erdogan used several slangs to ridicule the shooter, and then he asked his audience to stand in solidarity against the enemies of Turkey and Islam. Thereafter, all pro-government channels used the subtitle "Islam and Turkey’s Enemy Terrorist" when reporting the news about the New Zealand mosque shootings.

Within hours — first on social media and then on television — images of the assailant’s guns and magazines appeared. The writings on these were analyzed promptly and in detail by Sabah daily and discussed angrily on television shows. “Turkofagos” — a Greek word literally translated in English as “Turk Eater,” a nickname used for Greek revolutionary Nikitaras during the Greek Revolution and 1821 War of Independence — garnered much attention.

The attacker's words on Hagia Sophia and Erdogan’s name on the “to be killed” list hit a nerve in Turkey. Yet the Erdogan campaign's way of handling it all has been rather bizarre and dangerous.

The attack happened 15 days before local elections in Turkey. Erdogan’s campaign has been built on “survival” and desperate attempts for public displays of infatuation with the president. Different candidates have also made ridiculed attempts at invoking Islamic values, even going to the extreme to promise voters a place in heaven if they vote for the AKP.

Yet not even senior AKP bureaucrats imagined that Erdogan would use the attacker's own footage of the atrocity for his campaign. Erdogan told his audience, “Brothers, now I want to take you to New Zealand. Let’s look at the screen. It is beneficial for us to watch these.” Then he started showing the edited version of the shooter’s video to garner support from his Islamist and nationalist base. His audience — both at the rallies and at home watching television — included minors.

How can such acts of violence be displayed by the president in a country where even wine glasses and cigarettes are blurred onscreen to protect the morals and the minors through the vigilant screening of Turkey’s official broadcasting watchdog, RTUK? But the gruesome mosque attacks in New Zealand recorded by the terrorist to help spread his message can be repeatedly shown to crowds by the president?

The repeated words of leaders frequently have consequences. This election has seen intensified demonization of members of all opposition parties as well as different social groups such as Kurds, leftists and secularists, which contributes to further political polarization and inspires violent acts. All terror groups feed on this polarization, and they act to worsen it. By turning the terrorist’s propaganda images into its own election material, the Erdogan campaign may help ignite further hatred and anger among masses; it also normalizes violence while advocating revenge.

Erdogan played the footage with blurred images of the attack at several rallies March 15-17; he also added an edited video of Kemal Kilicdaroglu, chairman of the main opposition Republican People's Party. Erdogan’s words put Kilicdaroglu on the same level with Fraser Anning, a controversial Australian senator who is blaming Muslim immigration for the New Zealand mosque attacks. Erdogan lashed out at Kilicdaroglu, asking, “What different are you from that Australian senator?” After an angry rant — when the audience was booing Kilicdaroglu’s image on the screen at Erdogan’s rally — Erdogan repeated that Kilicdaroglu was working with the terrorists.

Erdogan has been struggling to make any credible promises during Turkey's recessionary economy, yet he has continued to rally based on fear-mongering and attacking opponents for not being patriotic or Muslim enough. This has become another tool for Erdogan to stir up popular feeling and play brave defender of the country.

Erdogan not only directed his anger toward the opposition but also against the non-Muslim world. Explaining the variety of terrorist attacks all around the world, he said, “If the assailant is Muslim, then the attack is labeled as Islamic terror. If the attacker is from another religion, the event will not pass the level of criminal incident and will be taken out of public view. Up until now, did you ever hear of Christian terror, Jewish terror, Buddhist terror or atheist terror?”

Erdogan also mentioned that the terrorist had spent several weeks in Turkey, and the Turkish National Intelligence Agency and the police were investigating where he had been and what he had done. Sources close to the Palace told Al-Monitor “to expect sensational leaks to the press before the election. The attention on this matter has to be kept alive because it finally gave the AKP base the boost it needed for the ballot box.”

Erdogan has built his divisive rhetoric on identity, which — by definition — is exclusionary. A Turkish diplomat with over a decade of service in EU countries told Al-Monitor on the condition of anonymity, “Since 2007, the AKP has expanded connections with the Turkish diaspora in Europe. Diyanet [the Turkish Religious Affairs Directorate], student groups or gangs all have become useful tools for the AKP’s expanding voter base here over the years for elections.”

The diplomat added, “There is a way to form a healthy diaspora that is well-integrated into the host society so that, by the second or third generation, they help form better relations between their new and old countries. Yes, anti-immigrant and white supremacist movements are on the rise, but reacting to them with the same identity argument is not the best way."