Erdogan’s government in panic over risk of electoral defeats

President Erdogan and his party are waging an election campaign of unprecedented vitriol and polarization, including a strong dose of religion, the main driver of which is the fear of losing big cities amid the country’s economic crisis. 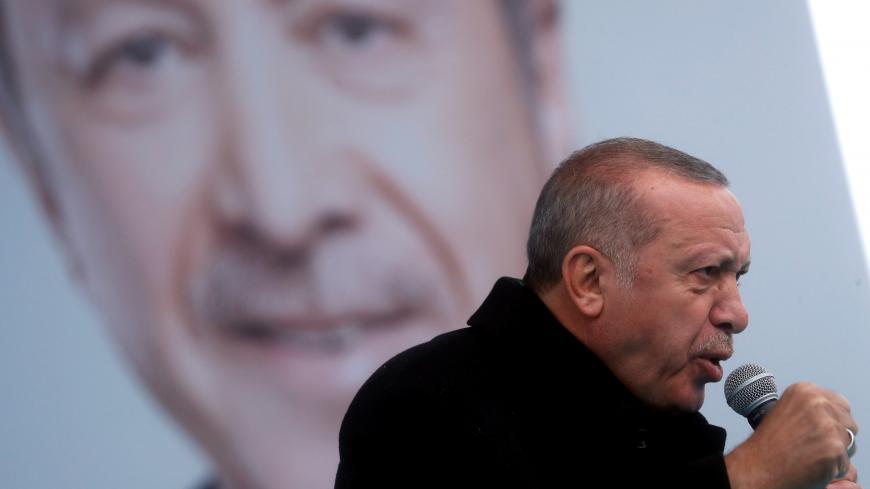 The campaign of President Recep Tayyip Erdogan’s government for the March 31 local elections will go down in history as the most polarizing campaign with the most virulent and offensive rhetoric that Turkey has seen under the Justice and Development Party (AKP). In no election before has the government employed religion and religion-based polarization so blatantly. The campaign has been marked also by unprecedented threats to opposition leaders and candidates as well as an apparent intent to not accept election results. Government spokesmen have virtually competed to delegitimize the opposition, seeking to keep their base intact by scaring voters with a demonized portrait of political opponents. The main cause of this extraordinary political syndrome is Turkey’s plunge into economic recession, which, coupled with a rising cost of living and growing unemployment, has raised the specter of the AKP losing the elections in big cities.

The syndrome climaxed after the March 15 mosque massacres in Christchurch, New Zealand, marking the coarsest exploitation of religion and religion-based polarization that Turkey has ever seen in electioneering.

Addressing a rally in the northwestern city of Tekirdag a day after the massacre, Erdogan pointed to the giant screen erected at the venue, saying, “Let’s watch this. It’s important.” What followed was footage from the mosque attacks, which the assailant himself had livestreamed.

Coming up next on the screen was Kemal Kilicdaroglu, head of the Republican People’s Party (CHP), the main opposition party and the senior partner in the Nation Alliance, which is the ruling party’s main challenger in the elections. Kilicdaroglu had already condemned the massacre the day it happened. “A grave terrorist crime has been committed against humanity. We call on Western countries to do their duties,” he told a gathering in Yalova March 15.

That’s how Erdogan used the bloodbath in New Zealand as a “religious justification” to urge voters to shun the Nation Alliance.

The persistent use of religion in electioneering has gone to extremes on the local level, with some AKP members claiming that voting for Erdogan will open the gates of heaven. In the southeastern province of Sanliurfa, a conservative stronghold, Mustafa Goktas, an AKP aspirant for the mayoral race in the district of Eyyubiye, told an election gathering March 16, “Vote for the AKP and Erdogan on March 31. Once you vote for Erdogan, you’ll have the key to heaven in your pocket. You should know that.”

In another election gathering in the same province March 3, AKP lawmaker Mehmet Kasim Gulpinar told his audience that “Allah will ask no questions” to AKP voters on Judgment Day.

Erdogan has used also threatening language against leading opposition figures while dropping strong hints that he is inclined to not recognize election results that are not to his liking.

The CHP’s Mansur Yavas, the Nation Alliance candidate for metropolitan mayor in Ankara who is ahead in all opinion polls, has been one of Erdogan’s prime targets. First, reports in pro-government media claimed March 8 that Yavas had been sued over a “forged promissory note” in 2015 and had lost the case. In a television program 10 days later, Erdogan was asked to comment on the issue. “The documents that have emerged and the judiciary’s decision regarding Mr. Yavas are not something that can be ignored,” he said. “Although [Yavas] has been able to run in the elections, those things will come to the nation’s attention after the elections, and then he will not only pay a hefty price but will make Ankara’s residents pay a price as well.”

Erdogan’s remarks can hardly be understood as anything else but an intimation that even if Yavas wins, he would be removed from office by law over the “forgery” conviction and replaced with a government-appointed trustee.

Meanwhile, Meral Aksener, the chairwoman of the Good Party, the junior partner of the Nation Alliance, was threatened with jail by the president. “Some are currently spending time in prison. You could meet the same fate,” Erdogan said March 9, referring to Aksener.

The menacing language is not limited to Erdogan, spreading down to the AKP’s provincial branches. Take, for instance, the remarks of the AKP’s provincial chairman in Kutahya, which not only vilify and threaten opposition voters but also condone violence against the opposition. “The evil alliance, the malign alliance or whoever come together doing politics against the values of this nation on March 31 will have no chance of walking those streets and neighborhoods,” Ali Cetinbas told AKP supporters March 10.

To offset the growing pressure of the economic crisis, government members have sought to portray the opposition as allies with terrorist groups. Interior Minister Suleyman Soylu, for instance, claimed in a March 11 speech in Aydin that if the AKP-led People’s Alliance emerged weaker from the elections, “They will give arms [even] to innocent 6-year-olds and ransack government buildings the next morning on April 1.” He urged voters to "not let Kilicdaroglu step into [local municipalities] with victory cries” because “he is coming here as a Trojan horse, bringing in representatives of the PKK [Kurdistan Workers Party]."

Foreign Minister Mevlut Cavusoglu, for his part, claimed that Nation Alliance candidates included supporters of terrorist organizations ranging from the PKK to radical leftist groups. “You are in alliance with the PKK, the FETO, the DHKP-C, the TIKKO and all sorts of terrorists, separatists and traitors out there. Is this nationalism?” he asked March 4 in Hatay province at the Syrian border. The minister also claimed the opposition supported Syrian President Bashar al-Assad, adding, “They have nothing to do with nationalism and the nation.”

All those examples show that despite its undisputed control over the media, public funds and the entire state establishment, especially the judiciary, the government is gripped by the panic of losing big cities under the bruising impact of the economic crisis, with the anxiety bringing out the oppressive propensity of its political culture like never before.