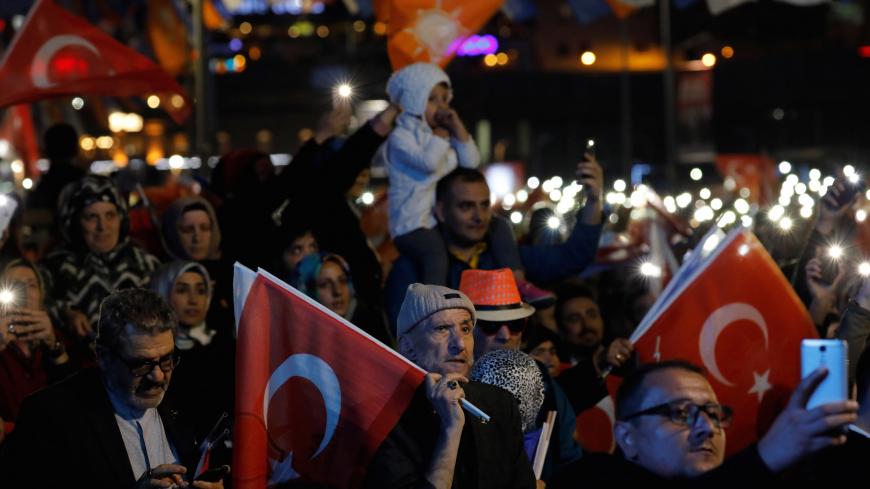 ANKARA, Turkey — Opposition parties have condemned President Recep Tayyip Erdogan for campaigning using the video made by the gunman who killed 50 people at two mosques in Christchurch, New Zealand.

In election rallies in the northwest towns of Zonguldak and Kocaeli today, Erdogan interrupted his speech to allow the crowds to watch the film taken by a camera strapped to the gunman’s helmet as he entered Al-Noor Mosque and went from room to room shooting worshippers. The video was played on huge screens beside the stage on which Erdogan stood.

The two main private TV channels, NTV and CNNTurk, broadcast the rallies live, as is customary with Erdogan’s speeches, meaning the video entered the homes and tearooms of millions of Turks.

The president’s video editors had blurred the images to lessen the horror of the atrocity, but one clearly saw the barrel of the gunman’s shotgun in the foreground. One heard the “Pop! Pop!” of rounds being fired, and one saw the hazy shapes of the people being targeted, some kneeling in prayer.

Pervin Buldan, the co-leader of the Peoples' Democratic Party (HDP), the third-biggest party in Turkey, accused Erdogan’s Justice and Development Party (AKP) of exploiting the video for the municipal elections March 31.

“Fifty people lost their lives in a very painful way (in New Zealand), and they want to turn this into votes,” Buldan told a rally of the pro-Kurdish party in Agri, eastern Turkey. “It’s a shame and it's a sin.”

Erdogan began using the video in his campaign speeches Saturday, the day after the atrocity. New Zealand Foreign Minister Winston Peters promptly expressed his concern to Turkish Vice President Fuat Oktay and Foreign Minister Mevlut Cavusoglu, who had arrived in Wellington to visit the three wounded Turks and convey Turkey’s sympathies over the massacre.

Peters told the media he had told Oktay and Cavusoglu that screening the video was “totally unfair.”

“Anything of that nature that misrepresents this country, given that this was a non-New Zealand citizen, imperils the future and safety of New Zealand’s people and our people abroad,” Peters said.

However, New Zealand’s appeal did not stop Erdogan from re-screening the video Monday and today.

“He’s unstoppable,” Ahmet Erozan, a legislator and deputy chairman of the Good Party (Iyi), told Al-Monitor. Erozan said the president was broadcasting the video because “losing an election for him is worse than to die. He is out of control.”

Opinion-makers across the world have censured social media for disseminating the gunman’s manifesto and video. Facebook was quick to reply that it had removed 1.5 million copies of the video in the first 24 hours after the massacre.

But evidently Erdogan has no qualms about disseminating the video, however blurred. And there are children in the crowds that he is addressing. During his speech in Kocaeli today Erdogan put his arm around a young boy.

He appears to have several motives. First and foremost, Erdogan wants voters to see the leader of the opposition, Kemal Kilicdaroglu, as a weak and ineffectual defender of Islam.

The video Erdogan screens has been edited so the massacre scenes are followed immediately by a clip of Kilicdaroglu speaking to a rally of his Republican People’s Party (CHP) in Yalova on Friday. Kilicdaroglu is shown saying: “In all the world, the drama and the terror going on within Islam have led to different perceptions of Islam. The Islamic world should reflect on why there is terrorism within its territory.”

When the video ends, Erdogan attacks Kilicdaroglu, saying “How can a Muslim speak like that?”

In fact, the quote Erdogan has picked on came at the end of a long and balanced passage. Kilicdaroglu condemned the atrocity in New Zealand, urged Western nations to recognize that it is “dangerous to make political capital out of Islam and other religions,” and criticized “the terrorist organizations Islamic State and al-Qaeda” for imposing their view of Islam at pain of death.

Erdogan also wants voters to see that he is a victim of the gunman’s hate. The manifesto does threaten Erdogan, and the video he screens includes highlighted texts from the manifesto. As the president told a crowd in Gaziantep on Sunday: “Together with all Muslims, our country, our nation and myself are targeted.”

The president intends for voters to see him as a strong defender of Islam. Today in Zonguldak he said of the gunman: “You killed our 50 brothers as they prayed. You will pay for it. If New Zealand does not deal with you, we will find a way to do so.”

Hours later, the HDP’s Buldan attacked the president for this. She recalled that dozens of people had been killed in the Islamic State group bombings of Diyarbakir, Suruc and Ankara in 2015, and accused the government of reassigning the security officials who failed to stop the suicide bombers involved.

“Now (Erdogan) comes along and says, ‘We will deal with the New Zealand (mass killer) if it does not.’ You have to account for the massacres in your own country first,” Buldan told a rally in Istanbul.

Kilicdaroglu was contemptuous of Erdogan’s attempt to destroy his reputation.

“A terrorist films how he massacred people, and you serve him by showing it at election rallies,” Kilicdaroglu said of the president. “It’s incredible. If you are enjoying it, you should take the video to the palace and watch it with your family for 24 hours.”

Opposition media have poured scorn on the president’s use of the video.

Sozcu, the third-biggest paper in Turkey, was the first to draw attention to Erdogan’s use of the massacre clip. On Saturday, its editorial gave the opinion of the CHP legislator Gursel Tekin, who said: “I condemn the spread of hate speech for a few votes. I invite the Supreme Electoral Council to fulfill its responsibilities. It is callous of Erdogan to show the video while knowing news channels would broadcast it live.” He called on the national broadcasting authority to stop TV channels from covering “rallies that spread hate speech.”

Neither the Supreme Electoral Council nor the national broadcasting authority, RTUK, has been known to rule against Erdogan.

The CHP channel, Halk TV, published a perceptive comment from one of the party’s former legislators, Eren Erdem, who is in jail for publishing terrorist material.

“After such a massacre, a terrorist expects the media to spread the images of the atrocity,” Erdem wrote. “The more these images are spread, the more the terrorist’s aims are realized. I am sure the (Christchurch) terrorist is now freaking out with delight.”

The debate over Erdogan’s publicizing of the massacre video coincided with a state prosecutor indicting the man who shares the HDP leadership with Buldan, Sezai Temelli. The official Anatolian Agency reported Temelli has been charged with “making terrorist propaganda.”