The Istanbul New Airport's current and projected damage to ecosystems, its subpar construction and its woeful financial setup is turning the project into a grandiose failure — one that will cost the Turkish public dearly for decades to come. 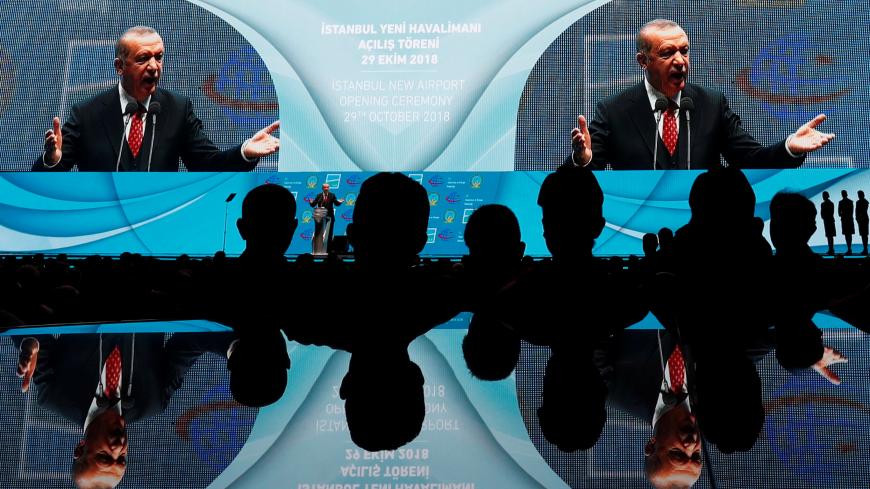 Turkish President Recep Tayyip Erdogan enjoys talking about gigantic construction works, aiming to make Western powers and domestic enemies envious. Often referred to as mega infrastructure projects, the third Bosporus Bridge, Istanbul Canal and the third international airport are his signature enterprises. Erdogan inaugurated the new airport at a soft opening Oct. 29, the 95th anniversary of the founding of the Turkish Republic. Named Istanbul New Airport (ISL), it aims to be the biggest hub in the world once it is fully operational.

Yet, when that day might actually come remains a mystery. The opening had been set for December. In January, a new date was announced: March 3. Around mid-February, another delay moved the opening to April. Despite all efforts, the airport suffered several cancelled flights and even temporary suspensions. Some reports say contractors are walking away from the project.

A senior employee from Turkish Airlines told Al-Monitor, “We need hangars for cargo and facilities for catering services. The construction is nowhere close to completion. We don't know when they will be done. It is not possible to fully operate before these facilities are completed."

These delays are not only embarrassing, but also indicate the Turkish government’s tainted management of even short-term planning. Indeed, the airport — once expected to be a "monument of victory" — has become a monumental problem.

Al-Monitor spoke with engineers, opposition lawmakers as well as workers’ representatives who are involved in the project. Almost all the groups criticized the project from the start, but their voices weren't taken into account. We found two main reasons for the delay — reasons that may cause serious problems if the airport becomes fully functional: bad planning and financial collapse.

First, the airport's location is simply wrong — for economic, environmental and infrastructural reasons. As explained in the official introductory video published Oct. 29, the land chosen for the project was previously the site of coal mines, with uneven surfaces, wetlands and coastal sand dunes. It took 750 million cubic meters (980 million cubic yards) of soil to fill and even it out — something the video portrays as an engineering conquest. Images captured from the sky may impress ordinary observers, but experts are concerned about the site's durability and safety.

An engineer from the Ministry of Transportation who spoke to Al-Monitor on condition of anonymity said, “I would not want any of my family members to even set foot in this airport. The project was started against all warnings and continued without meeting proper standards. For example, initially the recommendation was to [build] at least 105 meters [344 feet] above sea level. Then they reduced it to 90 meters, and finally it ended up at 60 meters. The ground is not stable; it's built on underground wetlands. There is not enough soil in the world to fill it safely.”

The engineer explained that the 105-meter height from sea level is directly linked to flight safety.

Indeed, on June 7, 2014, the first ground-breaking ceremony was held before the Environmental Impact Assessment report was even complete.

Several opposition lawmakers questioned the safety procedures. Sezgin Tanrikulu from the Republican People’s Party (CHP) shared with Al-Monitor multiple parliamentary questionnaires he had submitted. On Dec. 12, 2014, Tanrikulu asked three questions specifically concerning the distance above sea level being slashed. The change saved the construction consortium an estimated 2.5 billion euros ($2.8 billion) from their original plans, but it came at the expense of public safety.

The engineers Al-Monitor contacted all emphasized that a meteorological center should have been set up before airport construction began. The chosen area is susceptible to strong winds and fog for about one-third of the year. Not only is that dangerous for flights landing and taking off, the conditions have contributed to the deaths of many workers.

A senior construction worker who has been employed at the site for two years told Al-Monitor, “We don't know how many workers lost their lives, as different subcontractors were used. But I can tell you when I first started in 2016, we would stop work when the winds were stronger than 45 kilometers [28 miles] per hour. As the deadline approached, they would force workers to keep working under unsafe conditions at 65- to 70-kilometer [40- to 43.5-mlie] per hour winds.”

The airport has been described as the graveyard of an untold number of workers.

Environmentalists and scientists also accuse the project of ecocide for its cruel disruptions of ecosystems. The area is also in the path of major bird migration, which endangers the birds and increases the likelihood of birds entering planes' engines, risking the safety of flights.

The airport lacks proper public transportation to the city. Workers living under inhumane conditions and what few passengers there have been complained about the cost of reaching the airport. Plus, once the new airport is fully functional, Istanbul Ataturk Airport has to be shut down because Istanbul’s air traffic can't handle both airports at the same time. The airport was simply built at the worst possible place in the Istanbul region.

That brings us to the second reason for the delays. The consortium that won the bid to build the airport and its management rights for the next 25 years is called IGA, a group of five major companies (Cengiz, Limak, Mapa/MNG, Kolin Co. and Kalyon). These five companies, fortunate for their close links with the Turkish government, are frequently awarded lucrative tenders. Indeed, in 2018, these firms held five of the top 10 positions in a World Bank ranking of companies acquiring government tender bids in Europe and Central Asia. They originally each held a 20% share of the project. The project was delayed two years during which IGA paid no rent. The government initially guaranteed 90 million passengers per year to IGA. If this mark is not met, then the government will subsidize the remaining part. The five companies definitely saved money by changing the technical agreement after their bid was accepted.

In early January, news broke that Kolin Co., one of the five firms of the IGA consortium, was selling its 20% share back to the other shareholders. Bahadir Ozgur, a columnist for the publication Duvar, penned a piece titled “It's over, 3rd airport is going bankrupt.” His detailed analysis was followed by other experts in independent media outlets saying there are several indications that after the March 31 municipal elections, the IGA consortium will bail out of the project and leave all the debt with the government.

The more the airport's opening is delayed, the more debt is incurred by the main creditor, the government's airport administration directorate.

Beyza Ustun, an environmental engineering professor and former Peoples’ Democratic Party (HDP) lawmaker, concurred with other experts Al-Monitor interviewed that the airport will not be operating at full speed in the near future. “Since all projects are used as a tool for propaganda for the municipal elections, if there was any way that the airport could operate at some capacity that would have been done before April.” Ustun has worked in collaboration with the Solidarity Platform for airport workers, including those who have been arrested for protesting dangerous work conditions.

Indeed, the delays and hazards should not surprise anyone watching the airport planning — or lack of planning — closely for the last six or seven years. In June 2013, research published by scholars Seyfettin Gursel and Tuba Toru-Delibasi of Bahcesehir University Center for Economic and Social Research projected different scenarios estimating costs and profits of the airport project. Even using the most optimistic variables, their analysis demonstrated that the airport can't be expected to make a profit until 2043. Since the only creditor is the Turkish government, the costs will be incurred by the public. What public interests were served by the consecutive reckless choices made about the airport's construction?

So, why did Erdogan's administration stubbornly push the project? Simply because it could. So far, it seems only the IGA consortium has benefited from this project. There are myriad crucial questions still unanswered, and the public costs are snowballing each day.