Despite extensive incentives and other initiatives to create jobs, Turkey’s government has failed to reduce the unemployment rate to single digits during its 16-year rule and is now likely to bring it up to 15%, the highest level in three decades. 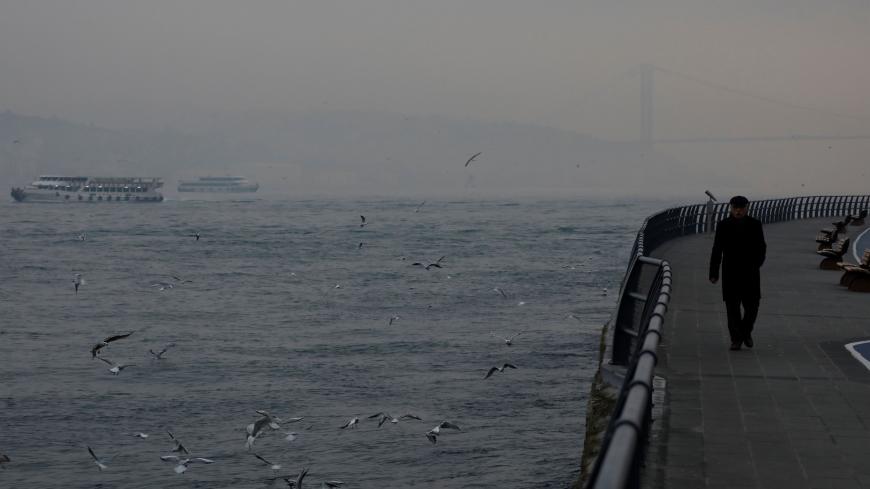 A man walks along the Bosporus during a foggy day in Istanbul, Turkey, Feb. 20, 2019. - REUTERS/Umit Bektas

Unemployment in crisis-hit Turkey has reached a staggering level ahead of the March 31 municipal elections, giving the opposition fresh ammunition in its quest to wrestle key cities from the ruling party and deal the government a political blow.

The country’s gross domestic product shrank 3% in the fourth quarter of 2018, according to official figures announced March 11, with the economy growing only 2.6% last year, a sharp decline from 7.4% in 2017.

Naturally, the contraction — coupled with consumer inflation of more than 20% — was expected to bring about a decrease in employment. On March 15, officials announced that the jobless rate hit 13.5% in December, exposing further the gravity of the country’s economic downturn.

The 13.5% figure is only a notch below Turkey’s worst unemployment rate in the past three decades — 14% in 2009, which was a year of crisis under the impact of global financial turmoil. Given the trend, however, the January rate, to be released in mid-April, appears set to break the record.

In the period from 1988 to 2002, the year the Justice and Development Party (AKP) came to power, Turkey’s average unemployment rate was 8%. It rose to 10.9% in the 16 years under the AKP. The jobless rate stood at 10.3% in 2002, when the AKP took over the government late in the year, peaking to 14% in 2009. Despite extensive incentives and other initiatives to create jobs and boost employment, the AKP government has failed to reduce the unemployment rate to single digits and is now poised to bring it up to 15%.

According to the Turkish Statistical Institute (TUIK), the number of jobless people rose to 4.3 million in December from nearly 3.3 million in the same month in 2017, as the rate jumped to 13.5% from 10.4% in the same period.

The data indicate that the more than 1 million increase in the number of jobless over a year included 633,000 people who lost their jobs and 378,000 who fell into the scope of the labor force but could not find a job despite looking for one. Construction was the sector where the largest number of people — 442,000 — lost their jobs last year. Employment in the agricultural sector was down by 375,000 people, a decrease that appears to have been partially compensated by the services sector.

The increase in the nonagricultural unemployment rate was also remarkable, rising to 15.6% from 12.3% in December 2017.

The rate of young people neither in employment nor in education or training stood at 24.9%.

The 13.5% overall unemployment rate is based on a narrow definition of unemployment. For TUIK, not all jobless people are “unemployed.” According to its definition, individuals aged above 15 are considered unemployed if they have used at least one job search channel in the past four weeks and are prepared to start work in two weeks’ time. Yet there are millions of others who wish to work but have lost hope in looking for a job. They do not figure in the official unemployment figures. When they are counted in as well, one gets the broad definition unemployment rate. The most detailed calculation method in this regard belongs to the International Labor Organization, which uses the term "labor underutilization" to describe broad definition unemployment.

According to the TUIK database, the 13.5% unemployment rate and the 4.3 million unemployed, calculated on the basis of the narrow definition, go up to 20.9% and 7.2 million, respectively, under the broad definition. The increase in the number of jobless is again around 1 million from 6.2 million in December 2017.

The country’s unemployment problem appears set to grow in the coming months. According to seasonally adjusted data, nonagricultural unemployment rose to 14.9% in December, with the increases in two consecutive months amounting to 1.3 percentage points. The Economic and Social Research Center of Istanbul’s Bahcesehir University estimates that seasonally adjusted nonagricultural unemployment rose 0.4 percentage points to hit 15.3% in January, which would mean a new record for the past three decades if confirmed officially in April.

Upon the appeal of President Recep Tayyip Erdogan, the government and the Union of Chambers and Commodity Exchanges of Turkey (TOBB) have jointly launched an “employment mobilization” campaign to rein in the worsening trend. Speaking at an Istanbul gathering March 15, Family, Labor and Social Services Minister Zehra Zumrut Selcuk voiced hope that the target of 2.5 million new jobs this year would be accomplished. TOBB Chairman Rifat Hisarciklioglu, meanwhile, urged even small business owners to employ at least one extra person “to both improve business and contribute to economic growth.”