Opposition figures are accused of trying to force out President Recep Tayyip Erdogan by leading demonstrations to save a park, yet they say the charges are an attempt to sway public opinion ahead of elections this month 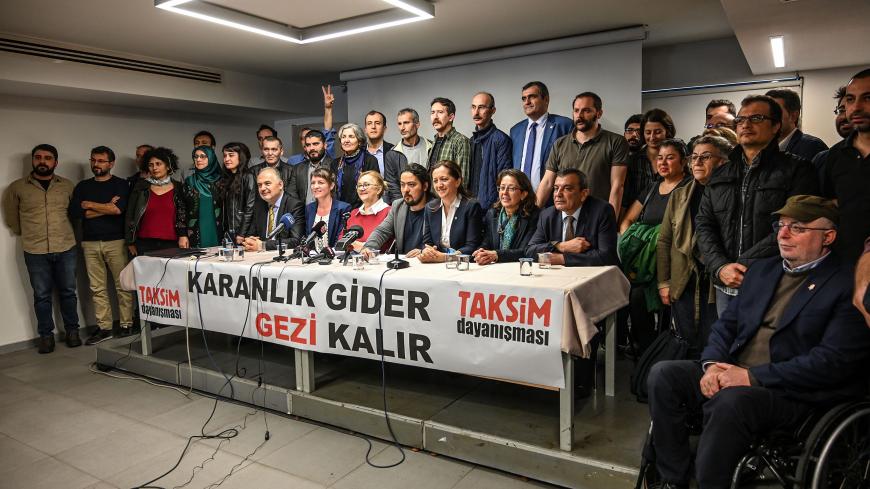 Members of Taksim Solidarity pose in front of a banner reading "Darkness will go, Gezi will stay," during a press conference in Istanbul, Turkey, March 11, 2019. - OZAN KOSE/AFP/Getty Images

ISTANBUL — Turkish activists blasted an indictment that calls for life sentences for 16 people who allegedly organized protests to save a park nearly six years ago, accusing the government of politicizing the judiciary ahead of elections this month.

A court last week formally accepted the 657-page indictment, which alleges the 2013 protests were an attempt to force President Recep Tayyip Erdogan, then prime minister, to either resign or “prepare the grounds for a civil war or coup.”

The protests began in opposition to government plans to demolish Gezi Park in central Istanbul to make way for a shopping mall. They quickly mushroomed into the largest anti-government demonstrations in a generation, with hundreds of thousands marching in cities across the country. At least nine people died in clashes with police.

Erdogan has linked the park protests to an abortive 2016 military coup and other attacks on his government. This week, he said environmental concerns were used by Gezi demonstrators as a pretext “to topple the government.” He said that those who planned and financed the protests would be brought to justice.

The president is campaigning for his party before the nationwide municipal elections on March 31. His critics say he is reviving the Gezi protests to rouse his base and distract them from anxiety over the economy, which is in recession after a credit-fueled expansion imploded last year.

“This government is an enemy of critical views and voices and is aware of the deep disquiet its failing policies have created across society,” Mucella Yapici, an architect who is among the defendants facing life in prison, said at a news conference on Monday.

“This entirely baseless bill of indictment, which makes a mockery of justice with its completely imagined accusations, will once again ruin the reputation of a judiciary that has already lost its credibility in the eyes of society,” she said, reading from a statement signed by Taksim Solidarity, which took part in the protests.

Yapici pointed to previous court judgments in which she and others had been acquitted because the demonstrations were protected by the constitution and laws on free expression.

But the latest indictment asserts that the real aim was to oust Erdogan. It says Osman Kavala, a prominent philanthropist, who has been imprisoned since October 2017, bankrolled the uprising and was also behind the failed coup three years later. Yigit Aksakoglu, a human rights campaigner, was jailed in November. Yapici and the remaining 13 defendants, including a filmmaker, journalists, lawyers and a popular actor, are free pending trial or have fled Turkey. The first hearing in the trial will be held June 24.

Yapici denied that the protest had a leader or financial backer or that it was associated with terrorism or coup plots. She described the indictment as “irrational [and] inspired by conspiracy theories.”

The indictment includes tweets, wiretaps of phone conversations and reportedly a map of Turkey’s beekeeping regions, allegedly recovered from Kavala’s phone, which prosecutors said showed a plot to divide the country. It also suggests a plot by disparate foreigners, including American billionaire George Soros, but does not explain their roles in detail. Soros’ Open Society Foundation closed its offices in Turkey last year, saying it had become a target.

Amnesty International on Friday issued a call for urgent action to release Kavala and Aksakoglu and drop the charges against all defendants, insisting “they are wrongly accused.”

Protesters at Gezi were overwhelmingly young Turks, many of whom camped for two weeks in the park. They wanted Erdogan to reverse his policies, such as curbs on alcohol and abortion, which they felt contravened Turkey’s secular constitution. Others were angered about a lack of social consensus on construction projects that have transformed Istanbul’s ancient skyline.

The motley alliance of environmentalists, leftists, secularists, Kurds and other groups that came together to save Gezi and express discontent with Erdogan has largely dissipated, especially since a sweeping clampdown on civil society in the wake of the coup attempt. Since 2014, Erdogan and his ruling Justice and Development Party (AKP) have won six presidential, municipal and parliamentary votes and a 2017 constitutional referendum that has expanded Erdogan’s presidential powers.

But some observers believe the AKP's support is receding ahead of local elections amid a dramatic economic downturn. Erdogan “is seeking to cement his voters who are hesitating about voting for the AKP,” Imambakir Ukus, a journalist and member of Taksim Solidarity, told Al-Monitor. “It’s an attempt to create the perception that Erdogan has been betrayed or is a victim, to rally supporters around him again. That’s why they are now depicting Gezi as an effort to topple him.”

On Friday, police used tear gas and rubber bullets to break up a Women’s Day march. Erdogan told rallies this week that opposition parties were behind this year’s event and accused the march attendees, estimated at 10,000 people, of protesting the azan, or Muslim call to prayer, which organizers denied. But the accusation angered Islamists, who marched past bars in the nightlife district of Beyoglu, near Gezi, on Sunday and shouted, “Break the hand that harms our azan.”

Gezi “was one of the proudest moments for Turkish society,” said Huda Kaya, a lawmaker with the pro-Kurdish opposition Peoples’ Democratic Party. She told the news conference that she attended the Gezi protests with her family. “The lies [about Gezi] are now lies about an attack on the azan. They won’t be able to prove these lies, and they will take their rightful place in history.”