State and Treasury department experts today warned a roomful of businesspeople that trade that is legal now may not be in the near future. 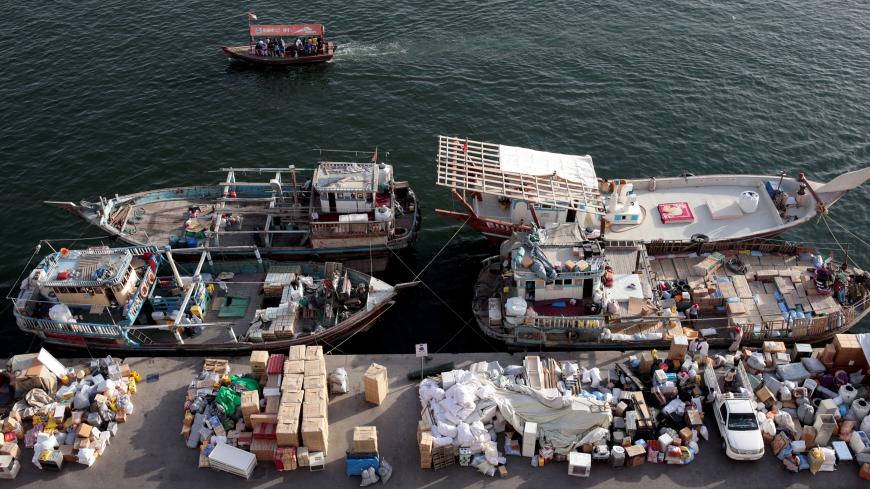 Goods wait to be loaded on dhows bound for Iran along the creek in old Dubai, United Arab Emirates, Nov. 5, 2018. - REUTERS/Christopher Pike

Donald Trump administration officials today told US and foreign businesspeople that legal trade with Iran — already severely restricted by sanctions — is likely to constrict further as the first anniversary of the US exit from the 2015 nuclear deal approaches.

At a meeting on “Sanctions: A Key Foreign Policy Tool” that filled an auditorium at the State Department, US officials asserted that sanctions on Iran were strategic in nature and aimed at “specific and narrow goals,” in the words of David Peyman, the deputy assistant secretary of state for counter threat finance and sanctions.

But those goals, according to Peyman and Brian Hook, the department’s special representative for Iran, still require a 180-degree change in Iran’s regional and defense posture. While Hook said the list of 12 demands put forward by Secretary of State Mike Pompeo last year is not “unrealistic,” Iran has shown no interest in coming back to the table as long as Washington remains out of the nuclear deal.

Peyman made clear that the many rounds of sanctions the US has imposed since May on Iran’s oil and financial sectors are only the beginning.

Companies still working with Iran should know that “the rules may change and may change quickly,” he said. “Tomorrow, next week or next month you may find yourself conducting business that may be legal today that isn't in the future."

Hook told the audience that the sanctions already imposed on Iran since May were the largest in history and covered 850 individuals and entities as well as entire sectors of the Iranian economy. “Our sanctions are back in place. There’s more to come,” he said. He described Iran as the “most significant threat in the Middle East” now that the Islamic State has been defeated in Iraq and Syria.

While Hook claimed US officials “do not want to hurt the Iranian people,” several members of the audience expressed concern over the administration’s lack of clarity over how to sell Iran food and medicine, which are theoretically exempt from sanctions.

“I find it troubling,” one sanctions lawyer told Al-Monitor, speaking on condition of anonymity. “It seems as if that is what they should be working on.”

Unable to find European financial institutions willing to accept payments for food and medicine sold to Iran, Europeans have created a so-called Special Purpose Vehicle (SPV) to process trade, beginning with unsanctioned goods. But the mechanism has yet to become operational and it isn’t clear whether it will also face US penalties.

Asked specifically about the SPV, Bradley Smith, deputy director of the US Treasury’s Office of Foreign Assets Control, was noncommittal. “We have to wait and see,” he said.

Peyman, who was a sanctions adviser to the hawkish group United Against Nuclear Iran before coming to the State Department, was more critical.

“I don’t think we’re keen on folks using the SPV,” he said.

US officials warned the audience that it was difficult for foreign businesses to avoid contact with sanctioned entities such as Iran’s Islamic Revolutionary Guard Corps (IRGC). Hook said between 50% to 70% of the Iranian economy is controlled by the IRGC.

Smith said that it was not sufficient for businesses to “know their customers” but that they also needed to know their “customers' customers” to avoid indirect contact with sanctioned entities.

Facing so many difficulties trading with its former partners in Europe and Asia, Iran is increasingly turning to neighbors to make up for the $10 billion in revenue Hook asserted had been lost in the past year from lower oil exports alone.

On a three-day trip to Iraq this week, Iranian President Hassan Rouhani focused on promoting commercial ties between the countries, which were bitter rivals before the US overthrew Saddam Hussein's regime in 2003 and enabled the country’s Shiite majority to take power. Rouhani spoke of increasing bilateral trade from $12 billion this year to $20 billion.

Although the United States encouraged Iraq to reduce trade with Iran, the Trump administration has given Iraq waivers to continue to import Iranian natural gas, which provides 40% of the electricity for the country. Any move to severely restrict Iran-Iraq commerce could destabilize Iraq and contradict other US foreign policy goals.

The Trump administration also hopes to keep a lid on oil prices to avoid hurting the US economy, which is slowing down after a boost from last year’s tax cuts. Waivers were granted in November to eight countries to continue to import limited amounts of Iranian oil and need to be renewed by May.

Hook promised more unspecified cuts to Iranian oil exports, which have already dropped by a million barrels a day. But US officials will have to take into account the fact that Venezuela, which produces a heavy crude similar to Iran’s, is also being sanctioned as the United States tries to overthrow the regime of President Nicolas Maduro.

Elizabeth Rosenberg, a former Treasury Department official who now directs the Energy, Economics, and Security Program at the Center for a New American Security, told Al-Monitor that while many of the topics are familiar, the Trump administration message to those who work on sanctions compliance issues “has become massively more politicized."