US fails to shield humanitarian trade with Iran as sanctions loom

European governments are urging the Trump administration to identify a legal means for their companies to continue to provide food and medicine to Iranians after the Nov. 5 re-imposition of secondary sanctions begins. 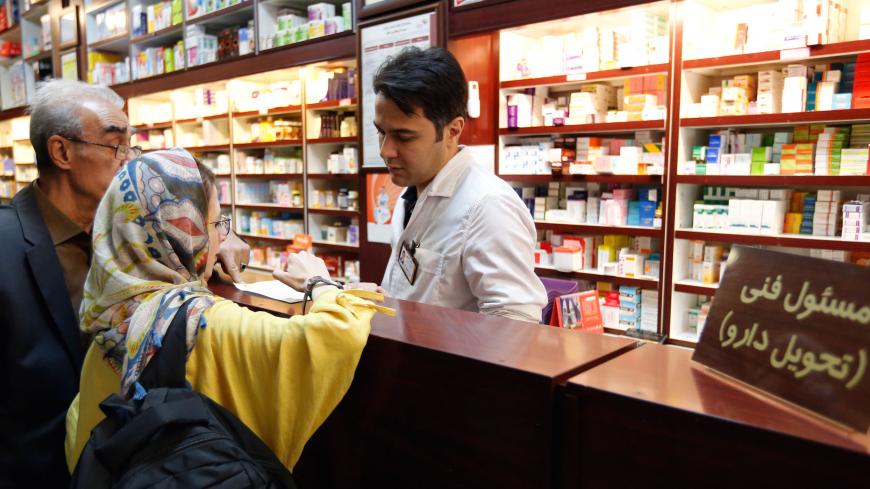 Iranians shop at a drugstore at the Nikan hospital in Tehran on Sept. 11, 2018. Judges at the International Court of Justice in The Hague unanimously ruled Washington should remove barriers to 'the free exportation to Iran of medicines and medical devices, food and agricultural commodities' as well as airplane parts. - STRINGER/AFP/Getty Images

European countries seeking to preserve the Iran nuclear deal in the face of resumed US sanctions are urging the Donald Trump administration to clarify how they can continue to legally provide food, medicine and medical devices to Iran.

Humanitarian trade is supposed to be exempt from the sanctions, which go back into full effect on Nov. 5. But with European banks reluctant to finance any transactions with Iran for fear of jeopardizing their much more lucrative US business, it remains unclear how crucial items will continue to flow to the Iranian people.

At an event at the conservative Hudson Institute on Oct. 29, French Ambassador to Washington Gerard Araud said US European allies “are expecting our American friends to make some gestures. For instance, the humanitarian goods. Of course, humanitarian goods are not sanctioned. But the fact is that the banks are so terrified by the sanctions that they don’t want to do anything with Iran.”

Araud added, “There is a strong risk in a few months that there will be a shortage of medicine in Iran if we don’t do something positive to solve this problem.”

Already, some Iranians are having difficulty finding life-saving medications in the market. One Iranian charity told the Christian Science Monitor that it has run out of four imported drugs used to treat cancer in children and is having difficulty receiving monetary donations from Europe.

During a previous period of sanctions before the conclusion of the 2015 Joint Comprehensive Plan of Action (JCPOA), Iranians also complained of shortages of vital medicines. However, banking and other sanctions at that time had broader international support because they had a clear goal: negotiations and a nuclear agreement. This time, US action is unilateral and the other parties to the JCPOA are trying to convince Iran to continue to comply with restrictions on its nuclear program absent the economic benefits it was promised.

Anticipating the resumed sanctions, US humanitarian trade with Iran is already down 40% under the Trump presidency compared to the situation that existed under the Barack Obama administration.

The Trump administration insists that it is on the side of “Iranian voices” and that its “maximum pressure” campaign only intends to squeeze the government, not the people, of Iran. But according to a European diplomat who spoke to Al-Monitor on condition of anonymity, neither the State Department nor the Treasury Department has given any guidance on how legitimate transactions can take place after Nov. 5.

The State Department’s homepage is entirely devoted to a “sanctions countdown” that lists Secretary of State Mike Pompeo’s 12 demands for radical changes in Iranian policies. These, plus improvement in Iran’s human rights record, are apparent US preconditions for new negotiations with the Islamic Republic — demands that Iran has rejected.

Asked if he could offer any guidance to the Europeans, a sanctions expert at the State Department declined to comment. Other administration officials have privately suggested that they are reluctant to “whitelist” any Iranian financial institution — even a private bank that has never been designated as connected to terrorism.

Many Iranians and Europeans were surprised when the Treasury Department on Oct. 16 sanctioned Parsian Bank — which had been a major conduit for humanitarian trade to Iran — on grounds that an investment company distantly linked to the Basij paramilitary organization had once owned 0.3% of the bank’s stock.

One positive development for the survival of the nuclear deal is that the Trump administration appears reluctant to block the SWIFT financial messaging system from continuing to work with Iranian banks. The State Department is also signaling that it will give waivers to some major Iranian oil importers and that it has abandoned any expectation of reducing Iranian oil exports to zero by the November deadline.

Ellie Geranmayeh, a senior fellow and deputy head of the Middle East program at the European Council on Foreign Relations, told Al-Monitor that the European Union was seeking “to ensure that at least a specified bank in Europe can handle payment transactions for humanitarian-related goods. They are pressing the US on this issue, including to ensure that there is not a broad sanctioning of Iranian private banks [for example, as we saw this month with Bank Parsian] that are the counterparts for many European companies exporting humanitarian goods to Iran.”

Another possibility is that European companies could use a new Special Purpose Vehicle (SPV) that the EU is creating to facilitate Europe-Iran trade. While the details of how this mechanism will work have not been disclosed, it could function as a sort of clearinghouse for bartering Iran’s oil for humanitarian goods.

The concept recalls the oil-for-food program set up in the 1990s that allowed Iraq to sell a limited amount of oil and ostensibly use the proceeds to feed its people. That program, however, was riddled with corruption on the part of Iraqi officials and middlemen, and tens of thousands of Iraqi children died of hunger and disease.

Geranmayeh said such a barter arrangement “is not the ideal choice — neither for Iran nor European companies. But as an urgent bridging solution, it might be that the SPV is used in this way.”

Other Iran analysts said it was incumbent upon the Trump administration to resolve this issue and not allow Iranians to die from diseases for which medicine is readily available in the West.

“This should be a proactive effort on the part of the Trump administration,” Suzanne Maloney of the Brookings Institution told an audience Oct. 30 at the Carnegie Endowment for International Peace. She noted that there were “vulnerable children” and others “who suffer from diseases and need US-origin drugs.”