Iran is still selling considerable quantities of oil to China, Japan, India and South Korea thanks to US waivers and other mechanisms to circumvent sanctions. 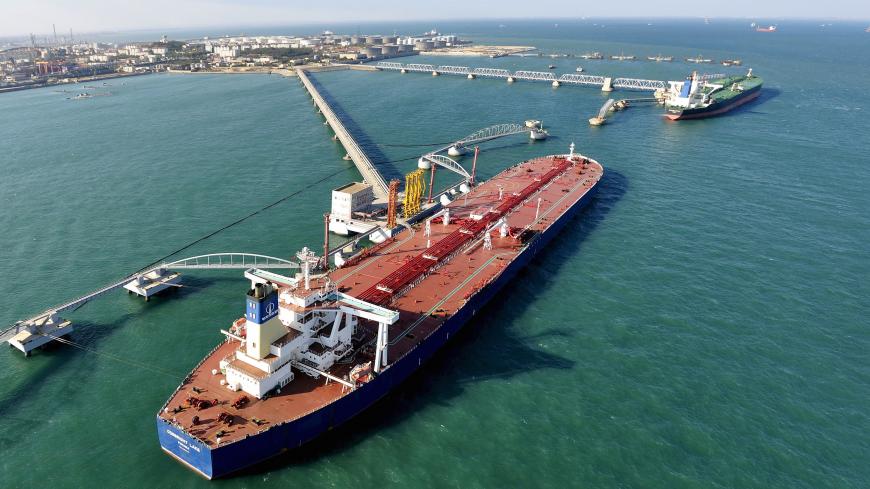 US withdrawal from the Iran nuclear deal is reinforcing a trend that was already underway as doubts mounted about the Donald Trump administration’s commitment to the Joint Comprehensive Plan of Action (JCPOA): Iran is looking east for its economic survival.

Under waivers announced by the Trump administration in November, eight countries are permitted to continue to import oil and condensates from Iran until March without falling afoul of US sanctions. Five of the eight are in Asia and of them, China is the biggest.

During a previous bout of sanctions in the lead-up to the JCPOA, China eclipsed the European Union as Iran’s major trading partner. It has vowed since Trump became president to continue this relationship with Iran for both economic and geopolitical reasons.

According to S&P Global Platts, China bought nearly 600,000 barrels per day of Iranian oil in October and may have purchased 650,000 barrels a day in November — considerably above its waiver quota of 360,000 barrels a day. Much of the crude went to refineries in Liaoning province that had not previously refined Iranian oil but where the National Iranian Oil Company has acquired storage capacity.

China is expected to pay for the oil with goods, services and investment. A bank that had previously been set up to facilitate China-Iran trade, Kunlun bank, is no longer doing so.

However, given the context of the ongoing trade war between China and the United States, Wu added; “I think China would try to have a balance between China-Iran relations and China-US relations. … The waiver is a temporary solution, and a wait-and-see position is realistic to see what will happen when the 180-day term expires.”

India, Japan and South Korea also received waivers from the Trump administration. Sara Vakhshouri, an expert on Iran’s oil industry and president of SVB Energy International, estimates that India will buy an average of nearly 300,000 barrels a day — only a slight reduction from the pre-sanctions period — while Japan will import 130,000-150,000 barrels and South Korea 180,000 barrels.

Taiwan was also granted a waiver but decided not to use it. Vakshouri told Al-Monitor that the island nation “was not a regular costumer and its imports are very insignificant.” Taiwan buys most of its oil from Saudi Arabia and Kuwait.

Mikkal Herberg, research director for Asian Energy Security at the National Bureau of Asian Research, agreed with Vakhshouri that the small quantity of oil imported from Iran was easy for Taiwan to replace. He told Al-Monitor in an email that Taiwanese imports of Iranian oil averaged only about 16,000 barrels a day from January to September this year. He added that it was “mostly bought on the spot market, not with more traditional longer 'term contracts.'” Taiwan’s Formosa Plastics has turned to Iraq to make up for the shortfall, benefiting from improved loading facilities and “more stable policies” in Baghdad, he said.

However, banking was also a factor. Herberg said that Taiwan had been using SWIFT, the Brussels-based financial messaging service, for payment and noted that the United States has “demanded that SWIFT disconnect most all of Iranian banks. So for Formosa Plastics it isn't worth the time and effort to set up a separate new payment arrangement with Iran.”

A Taiwanese refiner told Reuters that the absence of a payment mechanism was the main reason for the decision. In addition, Taiwan, which fears absorption by China, may be more sensitive to Washington’s political demands than other Asian countries.

South Korea and Japan also value security ties with the United States but have bigger economies and long-standing economic relationships with Iran. Herberg noted that for bigger buyers of Iranian oil, “It’s more worth the effort of making new payment arrangements for the six-month waiver period.”

Iran announced Dec. 1 that a means had been found for it to be paid for its oil exports to South Korea by trading oil for South Korean goods. Hossein Tanhayi, head of the Iran-South Korea chamber of commerce, told the Islamic Republic of Iran News Agency that a “joint fund” might also be set up linking the two countries’ central banks.

The US decision to quit the JCPOA in opposition to virtually the rest of the world has led to a variety of jury-rigged solutions for conducting trade with Iran that circumvent banks and the US-dominated international financial system.

France and Germany are believed close to creating a so-called Special Payment Vehicle (SPV) that will be used to balance imports to and exports from Iran without any money changing hands. European sources have told Al-Monitor that the SPV will be announced in January. It is likely that it will be used initially to facilitate trade in food and medicine and consumer goods to avoid attracting unwanted scrutiny from the US Treasury Department.

The Europeans have indicated that other countries may be welcome to join the SPV or that there may be multiple SPVs for different types of trade.

Iran has already worked out arrangements to do business with Turkey, India and Russia in local currencies, which translates to barter. This is the main way Iran survived sanctions in the past.

There are also new opportunities presented by shifting dynamics within the Organization of Petroleum Exporting Countries. The announcement by Qatar that it is leaving the oil cartel Jan.1 and focusing instead on natural gas could lead to more cooperation with fellow gas producers Russia and Iran.

Russia, which has managed to retain good relations with all parties in the Middle East and is under US sanctions for its intervention in Ukraine, has already announced that it will help market Iranian oil. And Iran itself has found some success selling oil to a private exchange in Tehran that then sells the crude to the highest available bidders.

To get around sanctions, Iran is using its own tankers and insurance as well as a variety of other coping mechanisms.

Brian Hook, the US special representative for Iran, predicted Dec. 3 that the United States would be able to force deeper cuts to Iran’s exports in 2019 when “we expect a much better-supplied oil market, and that will put us in a much better position to accelerate the path to zero.”

However, China and other Asian countries are likely to demand continued waivers. Wu told an event at the Atlantic Council earlier this year, “Iran is an important partner for us in the region.” Wu said China — unlike the United States, which has strongly sided with Saudi Arabia, the United Emirates and Israel in regional disputes — would not “take sides with anyone in the region.”

Correction: Dec. 5, 2018. This article has been updated to reflect that India is expected to import 300,000 barrels of Iranian oil a day.