The US campaign to convince the world to cut off Iran has taken a hit two weeks before oil sanctions are set to kick in. 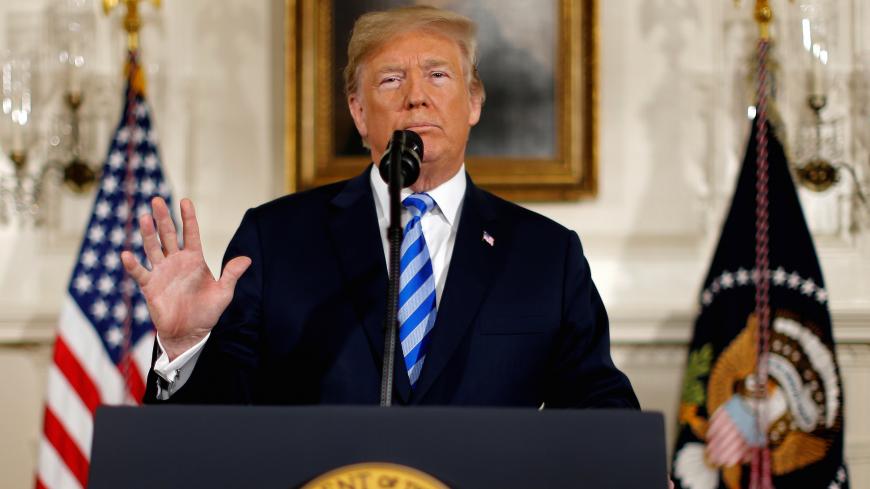 US President Donald Trump announces his intention to withdraw from the Iran nuclear agreement during a statement in the Diplomatic Room at the White House in Washington, US, May 8, 2018. - REUTERS/Jonathan Ernst

Confirmation that dissident Saudi journalist Jamal Khashoggi was killed in the Saudi Consulate in Istanbul comes at an extremely awkward moment for the Donald Trump administration’s escalating economic and information war against Saudi rival Iran.

Riyadh has now admitted that Saudi security officers killed Khashoggi on Oct. 2 shortly after he entered the consulate. It was barely a month before US secondary sanctions against Iran’s Central Bank and oil exports are due to come back into full force.

The crisis comes at a time when questions were already being raised about the efficacy of the resumed sanctions.

The Trump administration has been counting on Saudi Arabia to pump oil at maximum capacity to compensate for Iranian oil taken off the market by sanctions and to keep the price of oil relatively low. However, oil prices have already risen since the US quit the Joint Comprehensive Plan of Action (JCPOA) in May by about $20 a barrel, from around $60 to more than $80. Experts believe that it will be difficult for Saudi Arabia to continue to tap into spare capacity indefinitely if sanctions against Iran are as open-ended as they appear.

Sara Vakhshouri, founder and president of SVB Energy International, told Al-Monitor that the Organization of Petroleum Exporting Countries has 2.64 million barrels a day of spare capacity, of which Saudi Arabia accounts for 1.94 million barrels. She said, “OPEC and Saudi Arabia have already increased their production and not all of this above-mentioned capacity is available.”

Russia has also increased production and could increase further. However, “No one has an exact estimate for how long Saudi (and even Russia) can sustain their production at their maximum capacity,” she said. This creates “uncertainty” over the “volume and durability of spare capacity,” which in turn “creates panic in the market and potentially pushes the prices up.”

“Use of spare capacity as a cover for Iran oil production would leave no additional capacity in the market to cover for any sudden interruption in the market,” Vakhshouri said. “This again creates panic in the market and leads to higher prices.”

Vakshouri said the situation might be mitigated — but only late next year if US export capacity increases as expected by the market.

Iranian Oil Minister Bijan Zanganeh also expressed doubt about Saudi and Russian ability to replace Iranian oil exports. “As I have repeatedly said, there is no replacement for Iranian oil in the market,” Zanganeh told his ministry’s news agency on Oct. 22. “Saudi Arabia and Russia’s output is near their highest level ever and they have no spare capacity to pump more to replace Iran’s oil.”

Concerns over dwindling spare capacity and price hikes strengthen the case of important Iranian trading partners such as Turkey and India, which are seeking waivers to continue purchases of Iranian oil. China has rejected the US sanctions and Russia is offering to combine Iranian oil with its own to circumvent sanctions.

In the first two weeks of October, Iranian oil exports — far from falling to zero as the Trump administration has sought — actually rose 10% from the previous month’s average, to 2.2 million barrels a day.

During a previous bout of sanctions that preceded the JCPOA and that had far greater international support, Iran perfected a number of techniques for continuing to export oil. It offered discounts, used its own tankers and insurance and sometimes turned off tracking devices on tankers to mask their nationality and transfer oil to other ships on the open seas. It also stored large quantities of oil on tankers to avoid damaging wells by having to shut them down.

Iran used barter to continue trading with many countries, especially its largest trading partner, China and dealt in local currencies to avoid the US dollar.

Speaking to a small group of journalists and Iran analysts including this author in New York in September, Iranian Foreign Minister Mohammad Javad Zarif said it might even be profitable to avoid the dollar. Iran and its trading partners would use their own currencies in bilateral trade and settle any imbalances at the end of a specified period in a non-dollar currency, he said.

“More and more people are interested in avoiding the dollar in their transactions,” Zarif said. “Sell stuff in your own currency, buy stuff in the other country’s currency and at the end of a specific period, balance it out in a non-dollar currency. It’s quite possible and may even be profitable.”

The European Union, meanwhile, is creating a “Special Purpose Vehicle” (SPV) to facilitate trade with Iran after the re-imposition of banking sanctions. While major multinational companies such as Total and Siemens have already fled the Iranian market to avoid jeopardizing much more lucrative business in the United States, the SPV could help small and medium-sized European companies without exposure to the United States to continue trade with Iran.

While the United States presses its case for foreign business to cease ties with Iran, the Trump administration is also stepping up an information war against the Islamic Republic, highlighting its extensive human rights abuses and corruption.

As revelations about Khashoggi’s brutal murder dribbled out in the US and international press, Secretary of State Mike Pompeo published an op-ed in Foreign Affairs Magazine titled “Confronting Iran.” It branded Iran as an “outlaw regime” for its “malign activity” and added “substantial improvements on human rights” to Pompeo’s previous list of 12 demands for Iran to satisfy as apparent preconditions for negotiations on a new and improved nuclear agreement.

The article trumpeted the power of “moral clarity” to inflict pressure on US adversaries, as occurred when the Reagan administration declared the old Soviet Union an “evil empire.” The Trump administration suggested that publicizing Iran’s abuses, along with economic sanctions, could force it to return to the negotiating table and reach a “better deal” for US interests than the JCPOA.

However, the Trump administration’s ambivalent initial reaction to the brutal Khashoggi murder underlines the administration’s double standards when it comes to crimes committed by friends and allies. Meanwhile, stories and social media posts about the slain journalist are crowding out the anti-Iran campaign. Anguished tweets and articles by supporters of a tougher line against Tehran trying to “explain” Khashoggi's execution suggest concerns that the United States' Iran strategy is being eclipsed by anti-Saudi fervor.