Russia’s future in Iran looks brighter as Europe, US fade

Moscow hopes its efforts to help Iran work around US sanctions will pay off in trade, finance and politics. 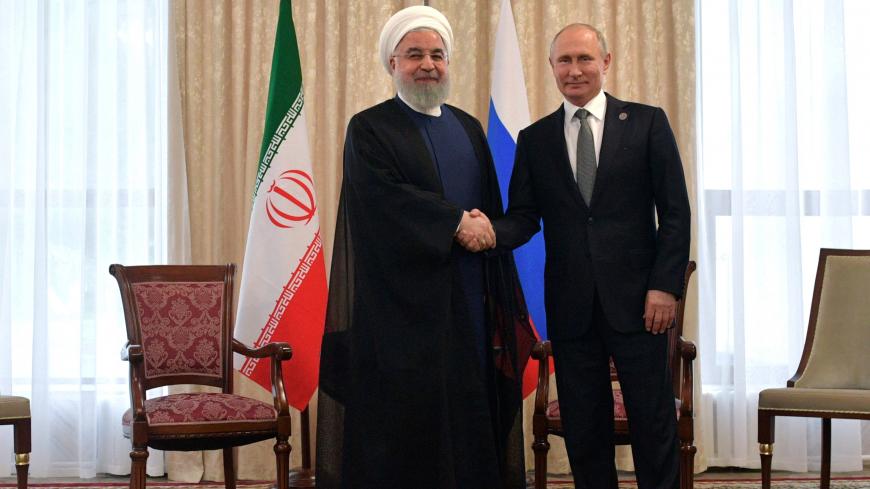 Iranian Supreme Leader Ayatollah Ali Khamenei has ruled out nuclear negotiations with the United States, and on Sept. 26 apparently wrote off Europe as well.

That leaves Moscow in the driver's seat as it works with Tehran to develop a system that benefits them both by evading US sanctions.

Khamenei has lost patience with Europe. French President Emanuel Macron has so far failed to make good on an initiative to provide a $15 billion international line of credit via the Instrument in Support of Trade Exchanges (INSTEX) system. Macron also was unable to persuade Iranian and US leaders to meet last week at the UN General Assembly session in New York.

To ease the isolation and economic pressure, Iran is looking to strengthen trade and financial relations with Russia as well as China and neighboring countries such as Turkey, Iraq and Afghanistan. But it will take significant maneuvering, as the United States is also sanctioning any country trading with Iran in US dollars, and the Society for Worldwide Interbank Financial Telecommunications (SWIFT) has suspended Iranian banks from its service.

So Iran has been seeking to conclude banking agreements and establish non-dollar and SWIFT-free financial mechanisms with these countries. Iran's efforts in this regard in relation to Iraq, the United Arab Emirates and Turkey have been somewhat fruitful.

Poor communication between Iranian and Russian banks — one of the major barriers to bilateral trade — is being resolved. Iran said earlier this month that it has connected its Financial Electronic Messaging System (SEPAM) to the financial messaging system developed by the the Bank of Russia, SPFS, and trade is increasing and expected to continue growing in the coming months.

According to the Federal Customs Service of Russia, trade between Iran and Russia grew 24.6% in the first seven months of 2019, reaching $1.33 billion. Russian exports to Iran reached $999.3 million (39.3% growth) and Iran’s exports to Russia stood at $333.7 million — a 6.2% decrease compared with the same period in the preceding year. Iran's share of Russia's total foreign trade rose from 0.3% to 0.4%.

Currently, about 25% to 30% of trade between the two countries is carried out in their national currencies. Tehran hopes that establishing the financial channel with Russia will boost that figure to more than 50% and increase Iran's share of exports to Russia.

Iran’s Parliamentary Research Center has released a report stressing that by developing bilateral or multilateral monetary treaties with various countries, at least half of Iran's total foreign trade can be carried out, evading US sanctions.

But the economic capacity of Iran-Russia relations is limited and Moscow doesn’t want to jeopardize its interests in a confrontation between Iran and the United States. So, although launching a special financial channel could boost bilateral trade, the increase wouldn’t be all that significant. For Iran, the regional aspect of launching this channel is more important than its bilateral dimension.

Russia is at the center of several hundred billion dollars in regional trade among Eurasia, the Commonwealth of Independent States, the Eurasian Economic Union (EEU) and the International North-South Transport Corridor (INSTC). By connecting to Russia’s banking system, Iran can have more commercial banking relationships with countries in this large market. Iran can also use financial channels established between Russia and other countries, including Turkey and China.

Although such communication won’t solve all of Iran's problems, it can reduce sanctions pressure and Iran's dependence on the dollar, strengthen and stabilize Iran’s national currency and increase Iran’s foreign trade.

Alluding to Iran’s plan to join the EEU in the near future, Central Bank of Iran Governor Abdolnaser Hemmati underlined the importance of the Iran-Russia financial channel for expanding trade between Iran and EEU member states. In May 2018, Iran and the EEU signed a three-year provisional agreement that will be enacted Oct. 28. Under the deal, preferential tariffs will be applied to at least 864 goods. It's a great opportunity to boost Iran's foreign trade, and Iran can use EEU member states to re-export its goods to European and other countries. The Iran-Russia financial channel will significantly help Iran benefit from this opportunity.

On the other hand, the transport capacity between the Far East, India, Russia and Europe is 30 million tons of cargo, expandable to 100 million tons. Mohammad Eslami, Iranian minister of roads and urban development, emphasized Iran will increase its share of cargo transported between the East and West. One of Iran's options for achieving this goal is the INSTC. According to Eslami, Iran, Russia and Azerbaijan will launch their integrated transport system by the end of 2020. Since Russia is an important element of this corridor, strengthening financial ties with it could be a major contribution toward achieving Iran's goal.

Establishing the Iran-Russia financial channel also has advantages for Moscow. Incorporating various countries into its SWIFT alternative could strengthen that system and Russia’s national currency, reduce the impact of sanctions and increase trade relations for Russia and Russian companies.

In addition, boosting trade and financial ties with Iran could help fulfill Russia's political goals of reducing US pressure on Iran, saving the Iran nuclear deal and maintaining long-term regional relations with Iran.

More importantly, Russia doesn’t want to lag behind its rivals in taking advantage of Iran's large market. Iran and China recently updated a 25-year, $400 billion economic agreement signed in 2016. Europe hopes to expand trade with Iran through INSTEX. If the European and Chinese plans are realized, Russia's access to the Iranian market will decline and Moscow’s political goals will be challenged.