President Mahmoud Abbas appointed Mohammad Shtayyeh, a veteran politician and member of the Fatah Central Committee, as prime minister, placing on his shoulders the heavy burden of forming a government that pleases all Palestinians. 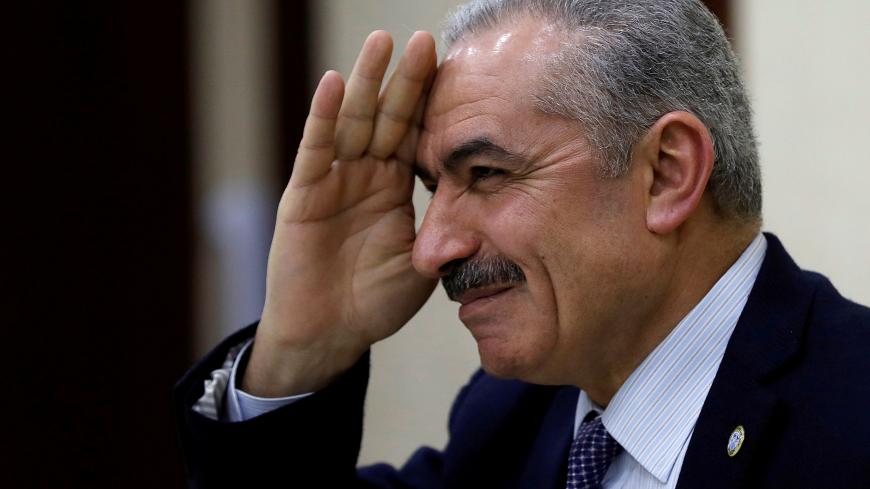 Palestine's new prime minister, Mohammad Shtayyeh, has an impressive background, and he will need all of his experience to succeed at the very challenging position he was entrusted with March 10 by Palestinian President Mahmoud Abbas.

When the Madrid Peace Conference was about to be launched in 1991, the Palestinian leadership looked for a person who could head a high-level team to ensure everything was prepared and there were no political traps being placed for the Palestinian delegation.

After consultations, the local leadership and the PLO decided to send Mohammad Shtayyeh, who was then dean of students at Birzeit University (1991-93), holder of a Ph.D. from the Institute of Development Studies at the University of Sussex in Brighton, England (1989), and a respected leader of the first intifada, which had begun in 1987.

Shtayyeh’s responsibility in the 1991 Madrid talks was to establish parameters for negotiations with Israeli counterparts. Since then, Shtayyeh has been a member of the Palestinian delegation during the Washington talks, the talks that followed the Madrid Conference on the interim agreements, and all final-status negotiations, including the most recent talks, initiated in 2013 by then-US Secretary of State John Kerry.

Shtayyeh has also participated in the Ad Hoc Liaison Committee to coordinate donor support for Palestine and he heads the delegation for multilateral talks with the Regional Working Group concerned with solving problems related to regional trade, finance and infrastructure.

As secretary-general of the Palestinian Central Elections Commission, Shtayyeh concluded in 2005 an agreement with Israel concerning cooperation on conducting Palestinian presidential and legislative elections.

After the establishment of the Palestinian Authority (PA) in 1995, Shtayyeh helped set up and has headed the Palestinian Economic Council for Development and Reconstruction, and headed the board of trustees of the Arab American University based in Jenin and Ramallah in the West Bank.

Of all these positions, however, the most important is his membership on the powerful Fatah Central Committee, to which he was elected in 2009.

Shtayyeh will need all his networks and contacts from the first intifada days until now, especially as a key member of the Fatah leadership.

Since the establishment of successive Palestinian governments, the powerful Fatah movement has tried to stay out of the government so as not to dilute its aim as a national liberation movement. But the current situation is different. The challenges facing Palestinians on both the political and economic fronts require a government that has political power and the ability to make tough decisions that might not be very popular.

Perhaps the most urgent issue facing the Shtayyeh administration will be how to handle the major drop in revenues due to Israel's unilateral decision to withhold some of the Palestinian tax money Israel collects on the border — to which the Palestinian government responded by refusing to accept anything less than what is mandated by the Declaration of Principles (Oslo Accords).

The second most urgent political issue will be how to handle the expected US peace plan, a deal that will most likely fall well below the minimum compromise acceptable to Palestinians. Al-Monitor has learned that Jordanian officials, including the king, have advised the Palestinian leadership to “wait five minutes” before saying no to the expected plan — which will probably be revealed after the April 9 Israeli elections. The Jordanian advice is that a delay in rejecting it will put the Israeli government in a dilemma, and thus avoid making the Palestinians look like they are the rejectionists.

Abbas has given Shtayyeh a seven-point letter of assignment. The letter calls on Shtayyeh to prioritize national unity; legislative elections, and support to victims of the Israeli occupation, including families of prisoners and martyrs, and the injured; to strengthen Palestinian steadfastness; to defend Jerusalem; to accelerate the national economy; and to strengthen private-public partnership.

Jamal Zakout, a political aide to former Prime Minister Salam Fayyad (2007-2013), told Al-Monitor that while national unity and elections are unlikely, it's important that Shtayyeh doesn’t fall into a trap. “The trap would be if he is unable to hold elections in Gaza and the West Bank, including Jerusalem, [and so then holds them] only in the West Bank. This would further deteriorate the already-splintered Palestinian people,” Zakout said.

Shtayyeh has the support of the Fatah movement and this could help him if he has any future clashes with Abbas, who until now has been able to make the government do what he wants. Shtayyeh is shrewd enough to be able to finesse issues without forcing a confrontation. But with Fatah behind him, he will at times be able to act independently of the Palestinian president.

Shtayyeh, 61, represents for the first time in modern Palestinian politics the generation of the first intifada. He has a lot going for him and has tremendous support from the Palestinian public and from activists throughout Palestine. He has to be wise and smart in how he conducts himself so that he doesn’t burn up all the support he currently has. This means that he must be totally honest with the people about the challenges facing Palestinians and find ways to include the public in any major decision that needs to be made on economic or political fronts.

A political government headed by a Fatah Central Committee member will have the power and ability to make some tough but necessary decisions. If Palestinians are made to feel that these decisions are in Palestine's best interest, they will support him even while biting their tongues. If they are ignored, he will quickly lose public support.