Kerry will find pessimism in Palestine

On an upcoming visit to the region, US Secretary of State John Kerry will find that the Palestinians have little faith in the ongoing peace talks 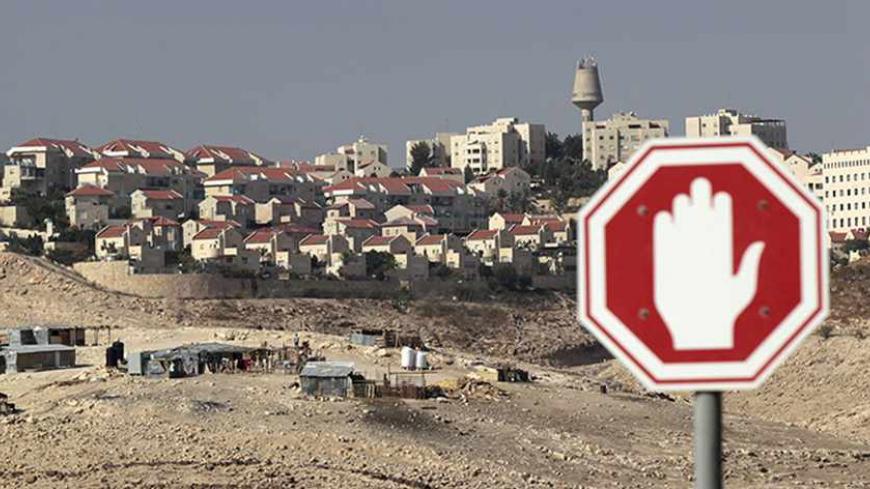 A signpost is seen in front of the West Bank Jewish settlement of Maale Adumim, near Jerusalem, Nov. 13, 2013. Palestinian Authority Chairman Mahmoud Abbas said his peace negotiators had resigned over the lack of progress in US-brokered statehood talks clouded by Israeli settlement building. - REUTERS/Ammar Awad

When US Secretary of State John Kerry visits the region this week, he is certain to find Palestinian expectations at an all-time low regarding any possible breakthrough in the peace talks with Israel. The dual resignations of Mohammad Shtayyeh and Saeb Erekat (who later rescinded his) reflect the Palestinians' general lack of faith in the negotiations, but also their desire not to burn any bridges, just in case.

More than halfway through the nine-month commitment to talks, the negotiations aim of producing a final package means that nothing will be agreed to until everything is agreed to. Not a single disputed issue can be checked off as being resolved along the way. Both sides will likely cling to their position on every controversial area until the very last minute.

Kerry’s visit might jolt Palestinians from a deep nap, after having shifted their attention from the political process to worrying about internal issues, such as the current teachers' strike.

A senior activist close to the office of Palestinian Authority Chairman Mahmoud Abbas (Abu Mazen) told Al-Monitor that if the talks appear to be going nowhere, the pressure will increase on Abbas and Israeli Prime Minister Benjamin Netanyahu to produce some tangible results on the ground. Such "carrots" could be in the form of easing movement for Palestinians within the West Bank as well as among the West Bank, Jerusalem, Gaza and the King Hussein (Allenby) Bridge to Jordan.

Shtayyeh’s refusal to withdraw his resignation has some Palestinians scratching their heads. The appointment of the Fatah Central Committee member to attend the talks, along with chief negotiator Erekat, was seen as an attempt to ensure that Erekat faithfully transmits to Abbas and the rest of the Palestinian leadership what is happening in the talks. It is in this context that many are concerned about Shtayyeh’s insistence on resigning. Some see it as a warning shot aimed at Abbas and the Fatah leadership, which has been in favor of the talk's continuation in the hopes of releasing all veteran (mostly Fatah) pre-Oslo prisoners.

The Fatah leadership, while not as confident in the talks as Abbas, sees in their continuation the preservation of the status quo and an important ingredient to remaining relevant and in power. In this respect, sources close to Fatah suggested to Al-Monitor that Shtayyeh might be replaced on the negotiating team by either Jibril Rajoub or Mohammad Madani. Both are members of the Central Committee.

Few people understand why Abbas continues to be upbeat about the talks. Some have argued that the reason might not be related to the talks led by Erekat and Israeli Justice Minister Tzipi Livni, but in a possible back channel between Abbas and the Israeli leadership. Regardless, while Abbas and to a lesser degree other Fatah leaders are in favor of continuing the talks, the same does not apply to the Palestine Liberation Organization, including Executive Committee members, and the public at large.

Gaza is another area that remains murky. Abbas continues to be financially supportive of Palestinians in Gaza despite Hamas control and the weak economy. While Palestinian protest against the Gaza–West Bank leadership split is at a low point, the Palestinian president insists that the Ramallah-based government continue to support the people of Gaza. The Abbas government spends a large portion of its budget to pay public employees in Gaza.

Hazem Kawasmi, a political activist from Jerusalem and chair of the Ramallah-based Freedom Forum Palestine, told Al-Monitor that Abbas has shown extraordinary sympathy toward Gazans. He explained, “President Abbas is showing more compassion toward Gazans than the [broader] Palestinian public, which has become apathetic in expecting a breakthrough in the reconciliation.” Kawasmi said that the situation in Gaza is at its worst since Hamas took over in 2007, with the public showing signs of hopelessness and helplessness.

The unity of Gaza and the West Bank as well as the West Bank and Jerusalem are all crucial elements in any long-term Palestinian strategy toward independence. Some Palestinians, including Kawasmi, believe that one way to ease the burden on the talks is to begin a process of reducing the Israeli walls, checkpoints and siege mentality.

Israel committed, by accepting the road map, to removing most checkpoints and returning to pre-October 2000 locations. This also means that Palestinian police would be stationed at the Allenby Bridge, which will be open 24 hours a day.

Kerry might find a Palestinian president who still smiles at him when they meet in Ramallah this week. It would be a big mistake, however, if the top US diplomat misinterprets Abbas’ protocol as representative of the mood of most Palestinians.