Israel's decision to approve more settlements only adds to the widely held view that it is not interested in peace with the Palestinians. 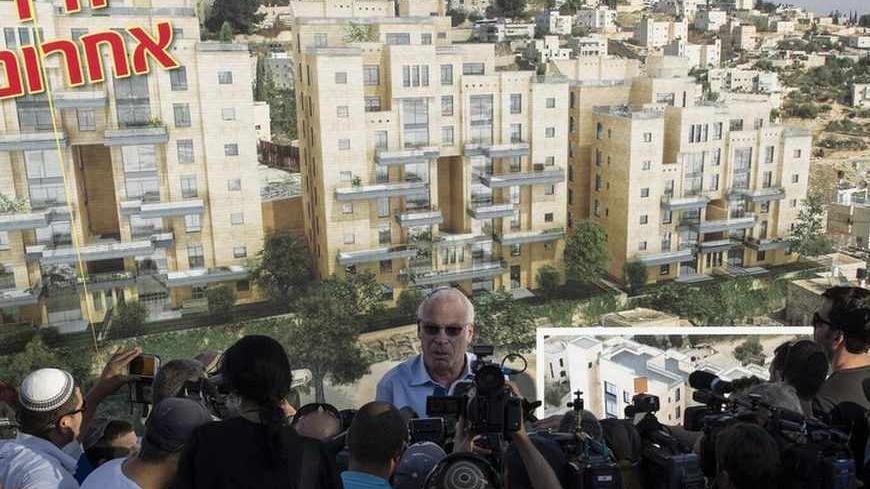 Israeli Housing Minister Uri Ariel speaks to reporters at an event announcing the resumption of construction of an Israeli neighborhood in East Jerusalem, Aug. 11, 2013. - REUTERS/Ronen Zvulun

Whenever peace negotiators agree to hold secret peace talks, rumors tend to fill the information gap. The absence of regular, updated news and comments on the day’s events and statements plays into the hands of radical groups whose aim is to thwart and derail any potential progress in the negotiations.

When the second round of Israeli-Palestinian talks begins Aug. 14 in Jerusalem, a number of questions will have to be answered. They vary from the personnel participating in the talks to the agenda to the follow-up of the negotiations. Furthermore, it is unclear whether the launch of the talks will have any effect, positive or negative, regarding the situation on the ground, especially the conditions of the Palestinians living under occupation.

On the participants, it is uncertain whether the individuals who took part in the first round of talks will continue to be the lead negotiators. A big unanswered question will be the role of the Americans. Will Martin Indyk, the US envoy, and his support unit have a seat at the table? In other words, will their presence be formal, and for the opening photo-op only, or will they remain in the room after the cameras are gone?

The setup of the talks is also a mystery. In Washington, Secretary of State John Kerry stated that all five permanent status issues will be discussed. Left unanswered was whether borders, refugees, settlements, Jerusalem and security require five separate Israel, Palestinian and American teams. Will there be a primary team to receive reports from the subgroups? Will they meet concurrently or consequentially? If the latter, the unanswered question is which topics will take priority? Again, the key unknown is whether the US teams will be present in the subgroups or only in the umbrella teams.

After the Jerusalem round of talks, there is to be another round in Jericho, hometown of Palestinian chief negotiator Saeb Erekat. How long will the Jericho talks last? Will it be a full round or simply a symbolic affair to give the impression of geographic balance? When will negotiators go back to their leaderships to brief them and receive instruction? Also, when will the Palestinian and Israeli leaders get involved? When will we see Israeli Prime Minister Benjamin Netanyahu and Palestinian President Mahmoud Abbas meet face to face?

To address the larger issue of the direct connection between the talks and daily life, it is important to ask whether confidence-building measures will continue to be part of the negotiations or a reflection on the improving peaceful atmosphere. The public has been informed that during the nine-month negotiation period, Israel will release in fours stages 104 Palestinians imprisoned since before 1993. Twenty-six prisoners are due to be set free Aug. 13.

No information has been made public regarding whether Israel will honor its commitments in the road map, which calls for security checkpoints to return to the pre-October 2000 period and includes putting Palestinian police on the King Hussein (Allenby) Bridge.

The controversial Israeli decision to build more than 1,000 new settlement units has brought into question the claim that Israel had committed, without a public statement, to stop settlement activity, especially in areas outside three settlement blocks close to the Green Line. Palestinians are concerned that the announcement of new building tenders is part of some kind of quid pro quo Netanyahu made with Israeli right-wing groups in return for the release of the prisoners. Palestinian political activist Mustafa Barghouti warned in July that the Israelis are using the talks as a cover and the release of prisoners as a form of blackmail to ensure that the Palestinians continue to show up at the talks while they continue with settlement activities.

Some of these questions will be answered by the single party that has been agreed to as the official 'spokesman' of the talks, the United States. More answers will become evident on the ground, and yet other questions will remain unanswered for some time.

It is understandable that sensitive peace talks be held in private for a limited period of time. It becomes dangerous, however, when one side uses secret peace talks, to which both parties are committed, to violate the very principle toward which the talks are aimed. Land for peace is the accepted pillar for which these talks were agreed upon. Any attempts to reduce the amount of land available will most certainly adversely affect the possibility of peace, regardless of whether the talks are held in secret or publicly.