Palestinians manage to evict settlers in Hebron in rare win

An Israeli court ordered the eviction of settlers from a house they occupied in the Old Town of Hebron, marking a significant and rare win for Palestinians and the committee defending their rights. 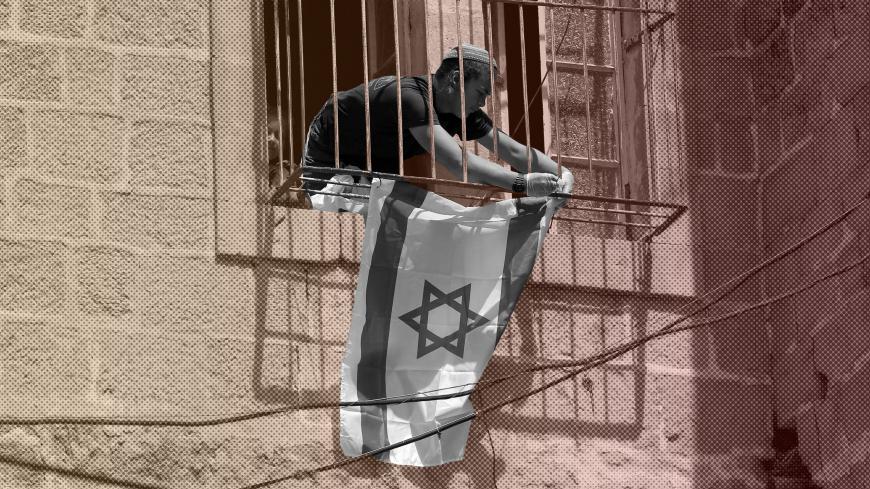 An Israeli flag is hung by an Israeli settler on a house in Hebron, in the occupied West Bank, March 27, 2018. - REUTERS/Mussa Qawasma

GAZA CITY, Gaza Strip — The Hebron Rehabilitation Committee announced March 12 that it had won an Israeli Magistrates Court decision to evict settlers from the al-Bakri family's house in Tel Rumeida neighborhood in the Old City of Hebron.

This case, presented by the committee before Israeli courts in 2005, took the longest time ever to be settled, after a 14-year legal dispute across different Israeli courts. The importance of the case lies in the location of the house that is situated inside a closed military zone in the Old City.

Settlers have tended to seize Palestinian citizens’ houses coercively, with the support of the Israeli Civil Administration, and they take advantage of citizens leaving their houses due to harassment. The al-Bakri family, which resided in the three-story house in question, was forced to leave in 2000 due to ongoing harassment from the settlers who later moved into the house.

Israel controls 20% of Hebron, as per the 1997 Hebron Protocol. Since that year, Israeli authorities have imposed practices and policies in the area for what it said were security reasons, which include imposing curfew, turning the roofs of houses into military barricades, closing shops and installing checkpoints across town to limit the entry of citizens from outside. As a result, hundreds of Palestinians were displaced from their houses. The numbers of Palestinians in the Old City are estimated at 40,000, while settlers amount to 800 distributed over five settlement complexes.

Jahchan said the Israeli courts have in effect been stalling judicial proceedings by accepting settlers’ lawsuits that are devoid of legal form and content, allowing the prolongation of the settlers’ stay in the house and impeding the Hebron Rehabilitation Committee from recovering the home.

Jahchan talked about the impediments that the committee faced before receiving the verdict. He said, “At the beginning, it was hard to discover the names of settlers controlling the house, as it is located in a closed military zone. We could not file a lawsuit without knowing the identities of our rivals.”

He added that the committee appointed a special investigator who found out the names and filed a lawsuit. After several sessions at the Israeli Magistrates Court, the settlers said they indeed had been in the house when they seized it in 2000, but later vacated it after an Israeli real estate company bought it in 2006 and occupied it. Therefore, the parties in the litigation changed.

In 2006, a lawsuit was filed against the company, which claimed it had bought the house, and the lawsuit was referred to the competent Supreme Court panel.

After legal disputes that lasted for 14 years, the committee succeeded in obtaining a decision from the Jerusalem Magistrates Court to evacuate settlers from the house. The decision is subject to appeal within 45 days from its issuance. Additionally, a financial fee estimated at tens of thousands of dollars was imposed on settlers.

Jahchan said, “The home is located in a critical area, adjacent to Arab houses. Our success in getting to this decision protects these houses and keeps settlers from expanding their presence in this direction.”

He said there were many cases in Israeli courts against military orders and settlers seizing Palestinian homes. He added that the committee is defending the town and its cultural and civilizational heritage and deterring all Israeli attempts to confiscate Palestinian property.

Political analyst and lecturer at Palestine Technical College Nidal Abu Ayyash told Al-Monitor that Israel is a state based on settlement expansion and seizing the property of Palestinians. He praised the committee’s success in extracting the decision, amid the settlement expansion in the city.

Ayyash said Hebron is facing the biggest Judaization operation in its history, with support from the Israeli government, which is allocating lump sums and security assistance to settlers.

He said that on Oct. 14, the Israeli government approved a plan to build a complete settlement neighborhood, including 31 settlement units in the Old City in Hebron. This would be the first project in the heart of the town since 1997 and would separate its northern and southern parts. The government allocated $6 million to build this neighborhood.

He said, “The Palestinian Authority must back the citizens of the Old City and offer them financial and moral support. Civil and international parties must unite their efforts to protect citizens and launch media campaigns exposing the Israeli army’s practices.”

Khaled al-Amairam an expert on settlement affairs and a lecturer at Hebron University, told Al-Monitor that the decision is positive and pushes Palestinians to file more cases against settlers who took over their houses. He said Israeli authorities create unthinkable ways to legitimize seizure of Palestinian lands and property, using tyranny and violence to push Palestinians to leave.

He said, “Life in this area is dangerous, and Palestinians have to leave because of their fear for their lives from settlers' abuses and harassment.”

Asaad al-Ouweiyi, a political analyst and lecturer at Jerusalem Open University, told Al-Monitor that Palestinian civil associations are closely following up to annul Israeli claims that their seizure of Palestinian property is rightful. Settlers first make people’s lives hell, then they push them to leave to seize their land, he added.

Ouweiyi said the competent authorities should encourage citizens’ resilience, grant them privileges and tax exemptions, improve their economic and social situation and build low-priced trade centers. The living situation is tough due to the tight Israeli control and the many checkpoints.

He said, “Settlers are taking over houses whose inhabitants have left. The concerned parties should house Palestinians in those vacant houses in coordination with the landlords to prevent settlers from taking over.”